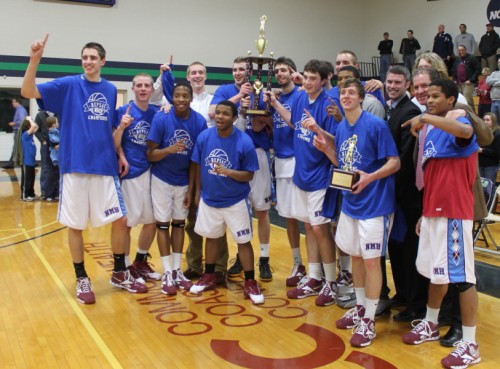 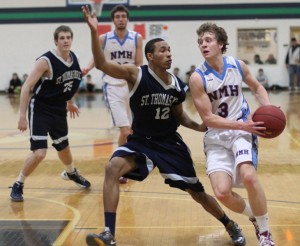 (Beverly) Northfield Mount Hermon hung on to defeat St. Thomas More, 74-70, for the third time this season and won the NEPSAC AAA boys’ championship on Sunday at Endicott College.

NMH took the lead for good 58-56 on a three by Sam Donahue (9 points) with 7 ½ to go.  They would build their lead up to seven three times after that with the last being (72-65) on a triple from game MVP Spike Albrecht (23 points) with thirty-six seconds left.

Thereafter things got very, very interesting.  Barrington Stevens (16 points) drained a three for STM and Spike missed the front end of a one-and-one.  Curtis Jones slashed to the basket and NMH got tied up for a jump ball turnover.  When the dust cleared on all that action, St. Thomas More had the basketball, trailed by only two (72-70), and had sixteen seconds left. 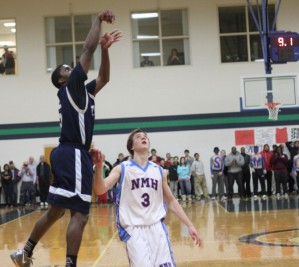 In the Chancellors last possession, the ball was in the dribble of Barrington Stevens most of the time.  He eventually broke past Spike Albrecht for a very good at about a 15-footer that missed.  Ethan O’Day (16 points) got the rebound for the Hoggers and quickly passed to Spike who was fouled.

Thirty-three seconds earlier the 6-1 senior had missed the front end of a one-and-one.  This time with three seconds left he connected on both attempts sealing the win for the team from Gill, Massachusetts.

#4 seed NMH had a marvelous tournament. Getting by undefeated #1 seed Brewster on Friday night was a significant upset.

Both St. Thomas More (Oakdale CT) and NMH had major runs in the first half.

Northfield jumped off 5-0 before STM put up ten straight.  Old-fashioned and new-fashioned three’s by Rodney Sanders (21 points) plus a converted rebound by Barrington Stevens and jumper by Ky Howard (10 points) were where the points came from.

The Chancellors were soon up 12-7 but the Hoggers responded with thirteen unanswered.  In this run Ethan O’Day (16 points) put on a show with a tip-in, a layup, and a dunk.  Evan Cummins (12 points) had a layup and a tip in and Spike put up a three-spot.  That gave NMH a 20-12 advantage.  But STM answered with two three’s and back and forth it went in the first half.

There were plenty of long ones made in this one.  St. Thomas More had ten and Northfield Mount Hermon nine but none was bigger than the one Spike Albrecht drained late in the shot clock in the last minute.  That connection turned out to be the winning basket.