(Boston) The St. Mary’s Spartans are the 2012 Massachusetts Division 4 champs after defeating Cathedral, 70-64, on Monday afternoon at the TD Garden.

St. Mary’s won despite missing seventeen free throws and squandering most of a 60-46 lead in the final quarter.  Cathedral had their fan base rocking as they got within four (62-58) on a couple of Kyle Lawler (26 points) lane scores with 2:15 left.

But the Panthers came up empty on their next four possessions while the Spartans tallied five points on one Nick Gagliolo (19 points) free throw, two freebies by Randolf Thurman (14 points) , and a breakaway layup by Devin Thompson (25 points).  Those five consecutive points put St. Mary’s up by nine (67-58) with forty seconds left and clinched the title for the team from Lynn.

Both teams are out of the Catholic Central Conference (Large) and were very familiar with each other.  They had met twice and split the results so this game figured to be close. 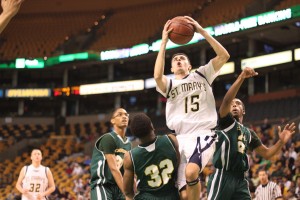 St. Mary’s (20-4) broke away from a 15-13 deficit with two minutes left in the first quarter stringing together nine straight points to take the lead for good (22-15) 1 ½ minutes into the second quarter.  A jumper by Devin Thompson, layups from Randolf Thurman and Nick Gagliolo, and a Devin triple did the damage for the Spartans.

Cathedral battled back to 26-23 but the Spartans ended the quarter with six straight points with five of them from Nick Gagliolo.  St. Mary’s led 32-23 at the half.

That nine-point lead was still there for St. Mary’s after three quarters (51-42) and you wondered if Cathedral (17-7) could make things interesting the rest of the way.

It sure didn’t seem like it when Devin Thompson sailed in on a fast-break layup to give the Spartans a 60-46 spread with 4:52 left in that final quarter.

But suddenly over a one minute span Cathedral put together eight in a row (two converted rebounds by Brandon Kelly, a layup after a steal by Kyle Lawyer, and two Anthony Bell free throws) and they only trailed 60-54 with 3:45 left.

There was certainly plenty of time for the Panthers to complete the comeback.  The Spartans hit just two of four free throws and unstoppable Kyle Lawyer got into the lane twice for scores.  Within four (62-58) with 2:15 left the sense was that they would get closer…… but they didn’t as the Panthers came up pointless over their next four possessions (one was a turnover and another was two missed free throws).

Seniors Kyle Lawler and Nick Gagliolo were 1000 point scorers during their careers.

The Spartan free throw shooting was frightening.  Hitting only 15-of-32, they kept Cathedral in the game.  Missing eight in the last quarter, nearly let the Panthers sneak back into this one.

Matt Owens (13 points) was Cathedral’s second highest scorer.  He had three triples.  He also had several long-range airballs.  (I’m convinced that unless players play in field houses during the season the depth perception at the Garden can throw some of them off.)  Matt seemed to be an example of that.

I came away impressed with the ball-handling skills of St. Mary’s point guard, Randolf Thurman.  Cathedral applied plenty of pressure but the turnovers resulting were few.

Nick Gagliolo looks for an opening

One response to “St. Mary’s holds on to defeat Cathedral (70-64) for Division 4 state title”