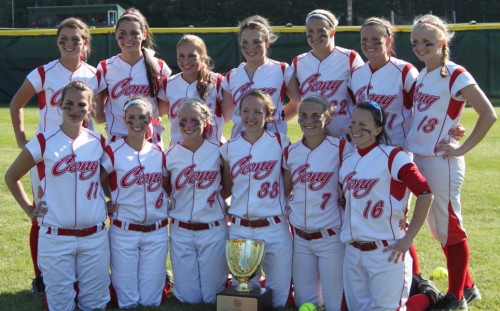 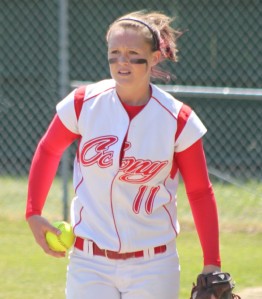 The Rams (20-0) benefited from three Erin Bogdanovich walks and a clutch two-out single by Cecilia Fuller in the fourth inning to get the two runs (Sonja Morse and Alyssa Brochu) that proved the difference in this one.

Sonja Morse was the #1 star in the biggest game of her life.  She had a no-hitter through 6 2/3 innings and was on base all three plate appearances.  The talented junior also scored the first Cony run.

The Red Riots (17-3) only had two base runners and both of them were picked off base.  Courtesy runner Abby Young was the first victim.  She ran for Sam DiBiase (walk) in the fifth inning with one out.  Abby got to second on a wild pitch but when Lindsay Cannon struck out for the second out, Abby appeared to think the inning was over and left second. She was tagged out after a throw from catcher Nicole Rugan.

Danica Gleason tagged out by Ram shortstop Alyssah Dennett to end the game.

Danica Gleason was the second base-running victim.  Danica singled in the seventh with two outs.   She took a big lead from first, then slipped and fell trying to get back to the bag. When she realized that she wouldn’t be able to get back to first she headed for second and ended up in a rundown.  Ram shortstop Alyssah Dennett applied the tag on Danica that ended the game.

There were plenty of strikeouts as Erin had thirteen and Sonja had ten.  The key difference between the two of them, other than Erin being a lefty and Sonja a righty,  turned out to be Erin’s three walks in the fourth inning.  Two of the Rams getting free passes scored.

Cony had a base runner in the second (Sonja Morse), two in the third (Arika Brochu and Alyssah Dennett) and one in the sixth (Sonja Morse) but Erin escaped each time.  In the sixth Nicole Rugan tripled but was cut down at the plate on Sonja’s fielder’s choice – third baseman Libby Grant to catcher Sam DiBiase. 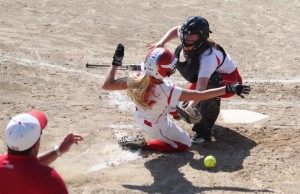 That productive fourth inning started with a Sonja Morse walk.  She was sacrificed (Maggie Russell) to second and reached third on a wild pitch with one out.  Alyssa Brochu walked and escaped a rundown to reach second.  Olivia Deeves walked to load the bases with two outs and set the stage for #9 hitter Cecilia Fuller.  The senior leftfielder singled down the right field line scoring Sonja.  The relay back into the infield wasn’t handled cleanly and Alyssa Brochu also scored.  With two outs and everyone running Alyssa would have been a tough out at home even if the relay had been handled better.

A scary moment was in the sixth when teammate Alyssa Brochu drilled a line drive into the Ram dugout catching Desiree Chabot in the face.  At most of the softball games I see there is protection for players in the dugout.  Desiree, by the way, recovered enough to be part of the post-game presentations.

Sonja struck out batters in every inning except the fifth.  She had five K’s in a row at one point. 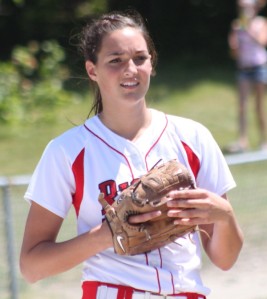 Erin got three strikeouts each on the top of the Ram’s batting order – Arika Brochu and Alyssah Dennett.

Nicole Rugan tripled over Riots right fielder Kelsey Morton’s head but was cut down at the plate later.

The bad memory for South Portland from the game will be ending two of the last three innings with runner’s getting picked off base.

This was first softball title for the school from Augusta since 1983.

Cony allowed only fourteen runs over the entire twenty-game schedule.

One of the umpires arrived late thinking that the game started at 4PM instead of 3PM.

I used the St. Joe’s press box in covering this game and it provided a much better view than standing along the fence as I did for the Fryeburg Academy/Greely game on Friday.

(All of the pictures above and below enlarge considerable if you click on them.) 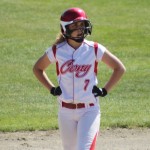 Alyssa Brochu caught in rundown. Laurine German has the ball.