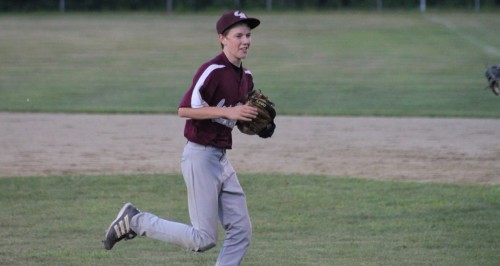 Central Maine pitcher Ben Smith is all smiles after pitching a 5-inning three hitter against Somerset. 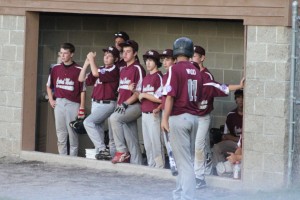 Central Maine will try to win another title on Sunday night.

(Harrison ME)  Central Maine made it look easy.

The Owls were mercy rule winners over Somerset, 12-2, in 4 ½ innings on Friday night in the Babe Ruth 13-year-old’s state baseball tournament at RADR Field in Harrison.

CM is now the lone undefeated team and will have a chance to win another title (they won last year) with one more victory on Sunday.  This is a double elimination tournament so even if the team from Waterville/Winslow should lose the 4PM game they would have a second chance in the 7PM game that night.

Central Maine was solid in all facets of the game.

You want pitching?  Ben Smith pitched a three-hitter and struck out four.

Sam Bell slides in with the second Central Maine run.

How about offense?  CM was held hitless by Will Stinson in the 4th inning but in the first three innings they punched out thirteen hits and ran wild on the bases.

The Owls had three hits in the first inning.  Connor Garland’s double delivered two of the three first inning tallies.

Things got worse in the second for Somerset.  CM went walk, single, single, single before Somerset starter Kyle Dugas was replaced with his team trailing 5-0 and the bases loaded with Owls.  CM added four more runs off of reliever Mitch Jarvis to run their advantage to 9-0 after two innings.

Somerset scored its only runs in the third.  They loaded the bases with one out and got their first run on Dustin Crawford’s fielder’s choice.  Brendan Curran would later score on a wild pitch by Ben Smith.

Andrew Rodrigue gets tagged out at third after tripping over second base.

CM built their margin to ten runs in the third inning.  Three straight hits followed by a sacrifice fly (Connor Garland) and a double (Andrew Rodrigue) did most of the damage.  Andrew was thrown out at third after he tripped going around second.

Mike Berry, Will Stinson, and Mason Oakes had the hits for Somerset.

Isaac Witham was hit by a pitch in the third inning and never returned.

Somerset falls into the loser’s bracket and will be back in action Saturday night (7PM).  A win there will get them a rematch with Central Maine on Sunday afternoon (4PM).

ball loose on a play at second 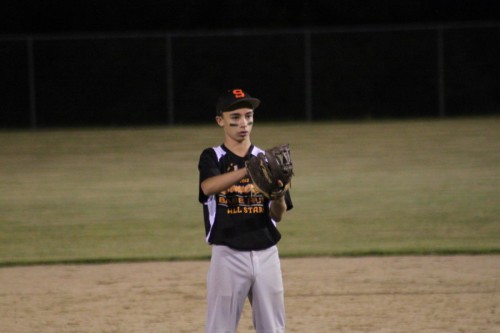 Dustin Crawford was the starter and closer for Somerset allowing just one run.

The victory keeps Somerset in the winner’s bracket and sets up a date with equally undefeated Central Maine at 7PM this evening (Friday) back at RADR Field.

Augusta moves into the other bracket in this double elimination tournament and needs to stay clean the rest of the way for a chance at the state title and a possible rematch with Somerset.

Augusta had faced Somerset in a district matchup on July 14th with Somerset winning, 5-4.  The stakes were much higher in Thursday night’s game.

This tourney game was large on runs, errors, pitchers used, and controversy.  Augusta had a nice five-run inning in the bottom of the third to take a 6-4 advantage.  Unfortunately, one of those runs was taken away in the top of the fourth and that’s where the controversy began.

The five runs should have stayed in my opinion.  Let me draw it out in the shortest way possible: Augusta sent nine batters to the plate in that inning, three batters made outs, and one runner was on base when the last out was recorded.  There is no conceivable way that Augusta wouldn’t have had to have scored five runs……….but the ruling stood and fortunately the removed run didn’t matter at the end.

The pitching of starter/closer Dustin Crawford saved the day for Somerset.  Dustin pitched the first two innings and gave up one run on one hit.  He was back in the seventh as the closer to protect a 3-run lead and responded with a scoreless final inning.

Somerset exploded for seven runs in the sixth inning after two outs to turn a 6-4 deficit into an 11-6 advantage.  Kyle Dugan (3 hits/3 RBI) had two of his hits in the decisive sixth as Somerset sent twelve men to the plate.

During that inning, Augusta replaced tiring starter Justin Rodrigue with the bases loaded and no runs in.  After striking out Mason Oakes for the second out Justin’s replacement, Andrew Browne, surrendered a walk and four straight hits before the bleeding was stopped by reliever Kolbe Merfeld. But Somerset at that point had a five-run lead.

Augusta got two back in the bottom of the sixth thanks to Brady Smith’s two-run single.  However, they left the bases loaded as reliever Brendan Curran escaped by striking out Zach Glidden and sending Somerset into the seventh with a three-run (11-8) advantage.

The most acrobatic sequence in this game was Taylor Heath jumping in an attempt to avoid the tag of catcher Will Stinson.  Taylor was ruled out. 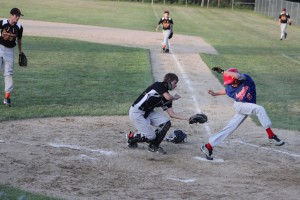 Somerset ended up with eight hits while Augusta had seven.

Dylan Abbott made several terrific plays in center for Augusta.

There were at least seven errors by my count most of them on infield grounders.

There were also seven different pitchers used as both coaches tried to balance the need to win this game with the need to have eligible pitchers in the games ahead.

If the weather stays good a state 13’s champion will be crowned on Sunday night at RADR Field.

Will Stinson scores in the sixth