Freshman Jenna Gagnon (17 points) puts up a long one

The Tigers (2-0) buried Georgetown, 74-20, in a Cape Ann League game on Friday night in their home opener.

A week ago the Ipswich girls opened their season on the road with a lopsided, 66-21, win over Amesbury.

I thought that Georgetown (2-2) might offer a challenge to the Tigers since they have 1000-point scorer Kristin Hogan as well as defender/shooter Marissa Agganis.  But it didn’t matter.

It was clear right off that the Royals would struggle against the aggressive Tiger defense.  Before the first quarter was half over the visitors already had seven turnovers and trailed, 6-0. 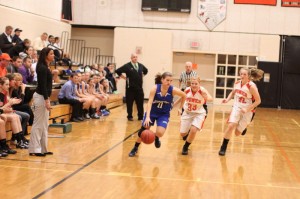 Ali Newbury’s layup from Kristin Hogan broke the ice for GTown with 4:15 left in the first quarter.

The Tigers followed with a productive run that ended any outcome suspense that may have existed.  Over the next 5 ½ minutes of playing time, extending into the second quarter, Ipswich dominated Georgetown to the tune of, 22-2, including one stretch of sixteen unanswered points.

The result of this terrific offense/defense was a, 28-4, Tiger lead with 6:48 left in only the second quarter.  The rest of the game was played but at no time was there any doubt at the Ipswich Tiger Den about the final outcome.

Keys to the Ipswich success during that special 5 ½ minutes were that they; had no turnovers, made three 3’s, and forced six Royal turnovers.

The Tigers put together another stretch of unanswered points (nine) in the second quarter.  Their halftime lead was, 42-9.

This was not a run-up-the-score kind of game.  Every player on both rosters played plenty.  Substituting five at a time was the norm in the second half. 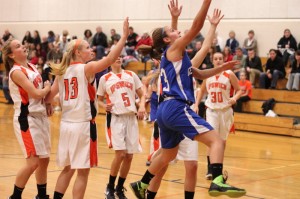 Marissa Agganis (7 points) sails in for a layup

Marissa Agganis (7 points) paced the Royals getting two 3’s in the second quarter.  Kristin Hogan only played in the first half and was limited to two points by defender Brigid O’Flynn.

Ipswich was 18-5 last year and have made the post-season tournament eight straight years.  Anyone attending the game I’m written about would feel quite certain that another Tiger tournament team is in the making.

Two of the teams that have had the Tigers’ number over the last few seasons are Masconomet and Pentucket.  This season Pentucket has already defeated Masco.

The Tigers will host Masco on January 3rd.  A win there by Ipswich will make the circle-the-date (January 15th) encounter with Pentucket at Pentucket a huge one in the Cape Ann League.

Former Tiger Shannon McFayden was in the house.

You knew that the outcome was decided early when both coaches sat during the entire second half.

Unofficially, Georgetown made only two of nineteen free throws.

Most impressive player?  Caroline Soucy.  The sophomore caused Georgetown trouble on both ends of the court.

Biggest surprise?  Jenna Gagnon.  The lefty put in four long ones and certainly wasn’t freshman shy about shooting.  Adding an outside shooting threat to the Ipswich lineup will open things up for the numerous Tiger drivers.

There was a Pentucket scout in the house.

Jordan Morrissey looks for a pass