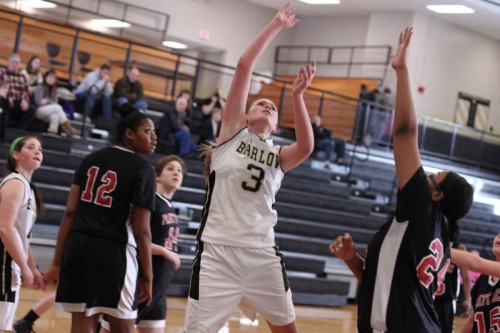 Drew Bartro (14 points) gets loose inside 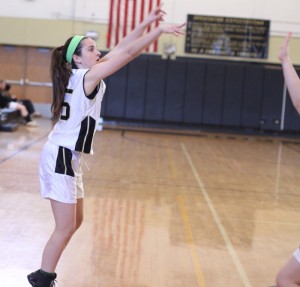 (Redding) The Platt Tech girls ventured out of the comforts of Class S and into the deeper waters with a Class L opponent and came out on the wrong end of 50-30 score at Joel Barlow on Monday afternoon.

The host Falcons (4-2) tallied the game’s first ten points, built their lead to twenty (28-8) in the second quarter, and were never seriously challenged.

Platt Tech (3-4) may have been taller but the superior Barlow quickness, organization, and unselfishness was noticeable.

Victoria Shea of Barlow took the opening tip in for a layup and Platt Tech needed 5 ½ minutes of playing time before they could match that basket.  Camileia Collier (15 points) hit the ice-breaker for the Panthers and it ended a ten-point run by Barlow.

The Falcons defended full-court but it caused few turnovers.  However, when PT missed, Barlow was quick to fast break and outnumbered the visitors from Milford in transition often.  That was when the unselfishness kicked in as open ten-footers were turned down for assists to teammates even closer to the basket. 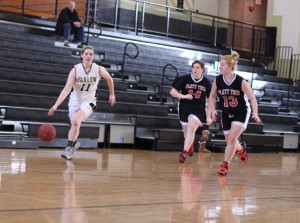 Platt Tech was content to use a zone defense and they had game-long trouble getting back after missed shots.  Even when the Panther defense was in place the Falcons passed and cut into openings for good shots.

Drew Bartro (14 points) led the Falcon scorers despite sitting out the fourth quarter.  She had eight of her points in the first quarter.  Drew was very effective inside even though (6-5) Aaliyah Bohannon was often in the area defending.

Kelly Mahoney (10 points) was the other Falcon in double figures.

Barlow coach Joe Carollo took off the full-court pressure even before halftime and had his team in a half-court zone for most of the second half.  This act of sportsmanship was a key to a 32-10 halftime lead not getting out of hand.

Platt Tech outscored the team from Redding, 20-18, in the second half. 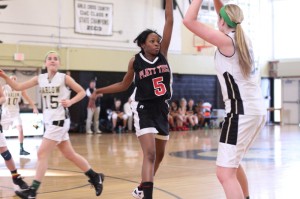 Joel Barlow’s next game is at home with Masuk on January 2nd at 7PM.

Platt Tech travels to Kaynor Tech on the same day to play at 6PM.

I was surprised that PT didn’t try to lob the ball often inside to Aaliyah.  She had moves around the basket and there certainly wasn’t a Barlow defender close to her size.

The most remarkable thing about this game, to me, was the lack of whistles.  There were only nine fouls called in the entire game!  And it wasn’t that the officials were letting them play……..there just wasn’t a lot of contact.  The game was over in just over an hour even though at the start of the game every player was introduced and the National Anthem was played.

I like the lack of a shot clock.  The Falcons took a lot of time off the clock passing, passing, and then passing some more, against the PT zone.

I did some homework on the teams beforehand and came away impressed with Sarah McAniff’s resume.  I’m guessing that there will be some real tears shed by the volleyball, basketball, and softball coaches when she puts on the Joel Barlow graduation gown in 2013.