Antoan Richardson dives back as Clint Robinson waits for a throw during the New Hampshire/New Britain game on April 25th. 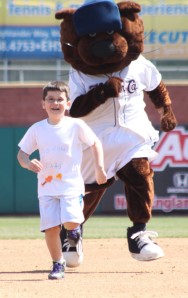 Anyone who follows this blog knows that I usually collect stats and then try to describe a game.  No need to do that at the AA level of the minor leagues because their websites have all that taken care of.

So instead, I go strictly to take pictures.  Action shots always have an interest to me but the big attraction is getting photos of prospects.

Ever since I got Bryce Harper two years ago when Harrisburg visited Portland I have assumed that the next phenom may turn up at an AA game.

I chose the New Hampshire/New Britain game because of the 10:35AM start.  The reason for the early game time is because NH is playing at Reading (PA) tomorrow night.  That’s a long bus ride!

Manchester is less than an hour away from the readership in the weekly newspaper (The Town Common) that I take pictures for.  Minor league baseball is an affordable, entertaining activity that the whole family can enjoy.

The weather was terrific for an April 25th morning – sunny with temps close to 60 degrees.

The two best players in this game were Alex Meyer and Kevin Pillar.  As is usually the case, I had never seen these players before so there is some mental scrambling needed to prepare.

I also wanted to get Danny Ortiz and Danny Santana of New Britain.

Alex Meyer is a 6-9, 23-year-old.  The Red Sox drafted him in 2008 but he wouldn’t sign even though they offered him a $2 million bonus.  He signed for that same number in 2011 when the Washington Nationals drafted him in the first round at #23.  Last November Alex was traded to Minnesota for Denard Span.

Alex pitched six innings today to get the 4-1 win (his second) against the Rock Cats.  He gave up eight hits, one earned run, and had seven strikeouts.

When I first got onto the field I learned that the Twins had just moved from New Britain up to Rochester (AAA).  My Murphy’s Law mentality imagined that it was Alex……..but it wasn’t.

Kevin Pillar came from a Division 2 college background in California.  He had a 54-game hitting streak but the D2 level of competition minimized that achievement in the minds of major league scouts. 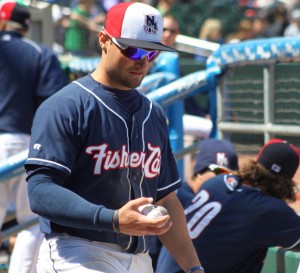 The 24-year-old is also an excellent outfielder.

I would strongly suspect that both players will be at Triple A before the 2013 season is over.

Special thanks to Tom Gauthier (media relations director) for arranging my visit.

Here’s a look at some of the things I saw today at the New Britain/New Hampshire game.