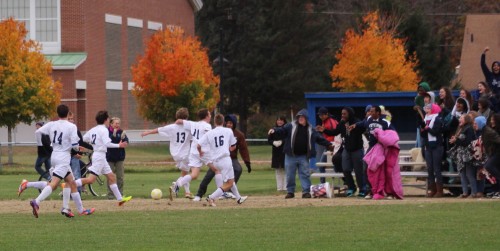 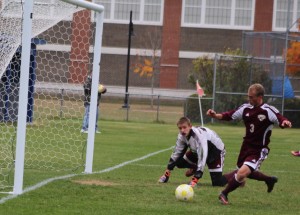 Ryder Bennell clears a ball away from in front of the Freeport net.

(Fryeburg ME) These teams were evenly matched!

A 1-1 tie on September 20th set the stage for today’s boys soccer match between Fryeburg Academy and Freeport on gloomy Saturday afternoon.

The stakes were higher this time around (Class B Western Maine preliminary round) and a winner would be decided no matter how long it took.

And it took a while.

Finally, at 6:19 of the second overtime, senior Gabe Perry of Fryeburg Academy cashed a penalty kick, that he had drawn, to settle this one.

Both teams in today’s game had opportunities to score, although Fryeburg had the better chances.  Joe Schrader, Ben Davis, and Tucker Hope had chances they’ll see in their sleep.  Ben had a marvelous feed from Gabe Perry in the second half that was chipped just over the net.

#9 seed Freeport (4-8-3) had enough defense in the right place at the right time to frustrate the home team over and over again.  If junior goalie Brendan Qualls wasn’t making the save, the core of defenders (starring Ryder Bennell) in front of him, were clearing dangerous intrusions out of harm’s way.

One of the key saves in the game was by Falcons defender Nick Nelsonwood in the second half.  The skillful senior saw GK Brendan Qualls away from the net unable to control a rebound.  A Raiders shot headed toward the net but Nick was there to clear the scoring chance out.  Big save, for sure!

A key matchup in this game involved seniors Gabe Perry and Harry Stivers.  Harry had the task of trying to contain the high-scoring Gabe.  If Gabe had stayed in one area the job might have been easier but Gabe is all over the field……..and so was Harry.

There were numerous entanglements between the two of them and a good assortment of pushes and shoves along the way.

Gabe went down a couple of times with Harry in the area.  On at least one occasion, Gabe looked for a call and I heard the referee mention what you do on a springboard in a swimming pool.

However, with less than seven minutes left in the second overtime, Gabe broke in from the left sidelines along the baseline and Harry stuck his leg in front of Gabe in an attempt to hit the ball and over went Gabe in the penalty area.

Penalty kicks are a guessing game for both players involved.  There is no time for the goalie to react after the shot is taken.  Freeport GK guessed that Gabe would shoot for the left side and dove in that direction.  Gabe’s shot went into the wide-open right side at 6:19 of the second overtime.

While the entire Raiders team was rushing across the field to their student section, FA coach Bob Hodgman-Burns instead went to Freeport GK Brendan Qualls congratulating him and for good reason.  Classy move, I thought.

I was impressed with the following Raiders: Jordan Kruguer, Ben Davis, Forrest Stearns, and Jared Schrader.

Freeport has five seniors on a roster of twenty players. 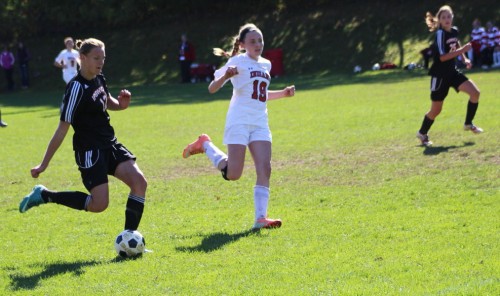 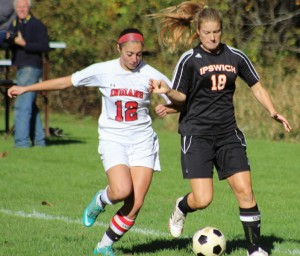 (Amesbury MA) If the Ipswich girls soccer team scores at least a goal in a game, they have come away with points this season.

That formula held true once again as the Tigers defeated the Amesbury Indians, 2-1, on a splendid holiday morning contest at Cashman Elementary School in Cape Ann League action.

Ipswich (6-3-5) has not scored many goals (twenty-one) but they had made them count because their defense has been solid.

Ipswich senior Devin Smith collected the game-winner in the second half just three minutes after Jill Hadwen had tied the score for the home team. 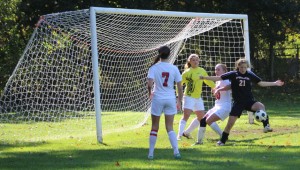 With the win over Amesbury, the Tigers now have 17 points and are closing in on qualifying for the state tournament (they’ve done it 4 straight seasons) with four games left.

The Tigers had the territorial edge in this one in my opinion.  They were at their best in the middle of the field and forced Amesbury to use the outside lanes to get deep into the Ipswich end.

Cape Ann League All-Star Katie Monahan was part of most of the Ipswich threats.  Her corner kick in the first half set up teammate Emily Evans for the first Tigers’ goal.  In the second half, she was part of some Ipswich pressure deep in the Amesbury end that forced a turnover and led indirectly to Devin Smith’s game winner.

In the season opener (September 3rd) for both Ipswich and Amesbury, Katie tallied the winning goal in a 2-1 victory.  Let’s just say that the Indians won’t miss having her around!

The first Ipswich goal came off a corner kick twenty minutes into the first half.  The field at Cashman is definitely narrow so corner kicks can end up where trouble lurks for defenders, especially the goalie.

Katie Monahan’s CK went off the hands of Amesbury sophomore goalie Zoe Fitzgerald and into an area where several Tigers, including senior Emily Evans, were positioned.  Emily put the loose ball into the net. 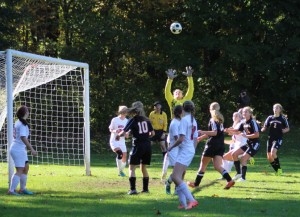 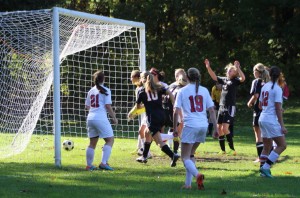 Ipswich led 1-0 at the half and because of the positional domination I thought they would get the next goal.  But it didn’t work that way.

Senior Kelly DiFazio took the direct kick and put it on net.  Ipswich GK Hannah Lynch and Amanda Martin collided as the ball reached the front of the net and a juicy rebound dropped to the ground.  Junior Jill Hadwen, who never stopped running toward the net,  collected the loose ball and drove it into the net to tie the score.

So after twenty-six minutes of the second half the score was tied.  I started to think that maybe Amesbury might break its four-game losing streak.  Wrong again.

Ipswich got Amesbury trapped in their own end three minutes later.  The Indians had been successful most of the time in keeping the Tigers out of the middle………but not this time. 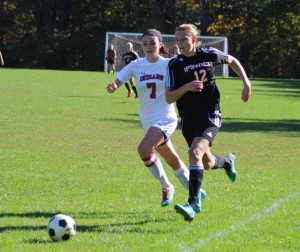 Senior Devin Smith intercepted a pass and broke in clean from the left.  Devin had AHS goalie Zoe Fitzgerald at her mercy and blasted a shot into the left side of the net with eleven minutes to go.

There were no “nearly scored” for either team the rest of the way and the Tigers left with a 2-1 win.

Ipswich next will travel to Rockport on Wednesday for a 7PM game.  They tied the Vikings 0-0 last time.

I was impressed with the play of Amanda Martin and Kelly DiFazio of the Indians.  Amanda was all over the field looking comfortable at either end.  The junior had four goals in a game this season.

Kelly is an important defender for Amesbury.  She plays with confidence and is not afraid to pull the ball back from a rushing attacker.  The senior had the assist on the Amesbury goal.

Junior JoAnna Perry of Ipswich caught my eye too.  She’s not tall but she wasn’t shy about getting into the middle of things.  She was a good passer and she also had the skills to pull the ball away from attackers.

The weather was simply stunning with plenty of October sun.  Good turnout of friends and family, many still talking about the day before in which both the Patriots and Red Sox served up terrific memories.

The Tigers have given up only 11 goals (four to Newburyport) in their fourteen games.  The Indians have surrendered 34 goals during thirteen games.

Tigers goalie Hannah Lynch saved a penalty kick in the 2-1 win over the Indians in September.

ball in the middle