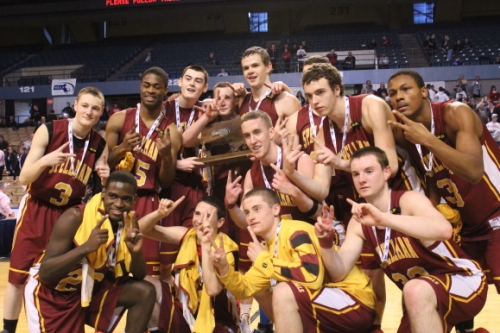 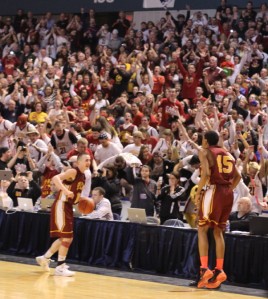 Ryan Roach dribbles out the clock

I know it’s illogical but this wasn’t a ten-point game.  Anyone viewing at the DCU will tell you that.

Tyngsboro trailed by eleven (53-42) with four minutes left but put together a streak of eight straight (two layups Austin Coene/ four free throws Drew Hurynowicz) to get within one possession (53-50) with 2:13 remaining.

This was anyone’s game with the Division 3 title going to the winner.

The game turned in the Cardinals favor on one play.  The undersized Tigers (tallest player 6-1) were victimized by a perfectly executed lob-and-dunk (Ryan Roach to Rory Donovan) that stopped Tyngsboro’s run and set the CS crowd into a frenzy. 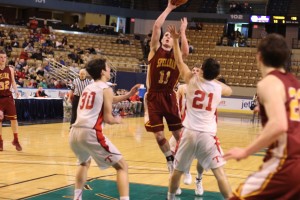 Austin Coene missed twice and after each miss the ball ended up in Austin Joseph’s hands and he was fouled.

The CS senior connected four straight times in ten seconds to restore the eleven-point edge (61-50) with thirty-five seconds left.  David Walker made a free throw with eleven second remaining to close out the scoring.

The hero of the day?  I haven’t even mentioned him yet: Collin Sullivan.

In the state semifinals, Collin played 2+ minutes with no shots.  In this game, the 6-2 sophomore was pressed into action in the first half after Brian Donohoe and Joey Crane got into foul trouble.

Before the game was over Collin had connected from long range four times giving the Cardinals twelve unexpected points.

Coach Michael Perry did say afterward that he thought going in that Collin might have a chance against Tyngsboro’s zone defense.  Coach Perry added that Collin wasn’t afraid to shoot.

Cardinal Spellman never gave back the lead after that although things got real tight leading up to the final two minutes.

Sophomore Drew Hurynowicz (24 points) and junior Austin Coene (18 points) carried the Tyngsboro offense.  Both of them had the knack of getting to the basket.  Drew had fourteen points in the first half including consecutive three’s in the first quarter that put the Tigers in front, 12-9.

Ryan Roach topped the Cardinals in scoring with fourteen points.

Tough game for Joey Crane.  The senior had twenty points in the Watertown win but was a foul magnet in this one.

I was very impressed with Tyngsboro’s zone defense.  They shifted quickly and forced CS to the perimeter most of the time.

One stat that will haunt the Tigers for a while was their free throw shooting……….16-for-24.

Tyngsboro represented the Central Division.  The Central has won the D3 state title only eleven times since the tournament started 52 years ago.  Whitinsville Christian was the most recent in 2011.  Crusaders coach Jeff Bajema and his son Taylor, who starred for that team, took in the Cardinal Spellman/Tyngsboro game.

My eyes are old but I swear that in the last minute I saw Ryan Roach dribble through a Tyngsboro players legs to get by him in the backcourt.

Rory Donovan (11 points) gets inside for two 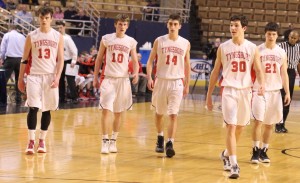 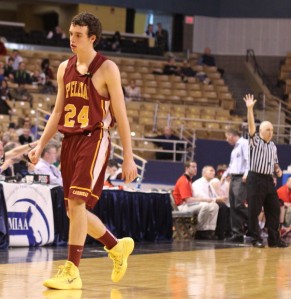 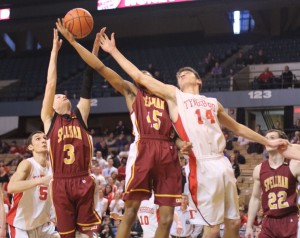 reaching for a rebound 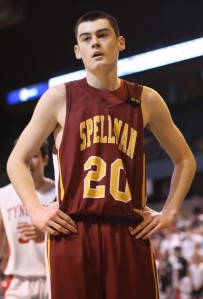