The Clippers (0-2) were one out away from winning this game in seven innings but Brett Harring singled in the hole to score pinch-hitter Ted Hogan.

Austen Michel led off the Generals’ 8th with an opposite-field bomb over the rightfield fence off hard-luck Clippers starter Cam Beaulieu.  That run was enough as HW reliever Drew Gallant retired Newburyport in order in the bottom of the eighth.

Hamilton-Wenham (2-0) took a 1-0 lead in the third inning.  Harrison O’Brien reached on an infield single, was bunted to second, and reached third with two outs.  Drew Gallant pushed the run across with a single to center. 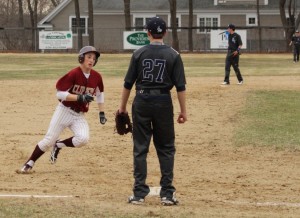 The Clippers pulled in front in the fifth inning.  Third baseman Harrison O’Brien rushed a throw after a good Chance Carpenter bunt and Chance ended up on second.  Chance reached third on a wild pitch and raced home on Caleb Stott’s sacrifice fly to right.

Hamilton-Wenham forced extra innings with an exciting seventh-inning rally.  Pinch-hitter Ted Hogan walked and pitcher Cam Beaulieu balked him to second.  Mark Vivenzio singled Ted Hogan to third and took second on the throw in.  That put two runners in scoring position with no outs.

Newburyport nearly came out of the inning unscathed.  Cam Beaulieu K’d Travis O’Brien and got Henry Eager to pop to third for the second out.  The Clippers needed one more out but they didn’t get it until after catcher Brett Harring had slashed an opposite-field grounder between third and short driving in Ted Hogan with the tying run.

Austen Michel’s homer was a no-doubter.

Austen Michel was out trying to stretch a single in the first inning.  The throw in from the Newburyport outfield sailed over the cutoff man but arrived in plenty of time for shortstop Caleb Stott to apply the tag.

The Clippers turned a nifty 5-4-3 double play in the second.

Newburyport squandered a glorious chance in the second inning.  Two singles and a walk loaded the bases with one out but HW starter Jack Clay K’d Ben Ventura and got Jeremy Grabowski to ground out to second baseman Drew Gallant on a very close play.

Cam Beaulieu’s only walk was in the seventh inning.

The Clippers were held hitless during the final three innings.

Weather?  Nice and sunny at the start but there was a storm cloud in the distance.  By the fifth inning that storm cloud was producing drizzle.  My camera and I have a deal: I keep it dry and it keeps working!  Fortunately, at Newburyport there is a storage shed nearby which provided adequate shelter.

Harrison OBrien about to be tagged out at third

Scott Webster hustles to beat a throw to first 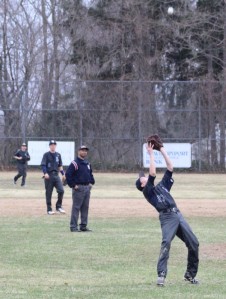 Harrison OBrien settles under a popup