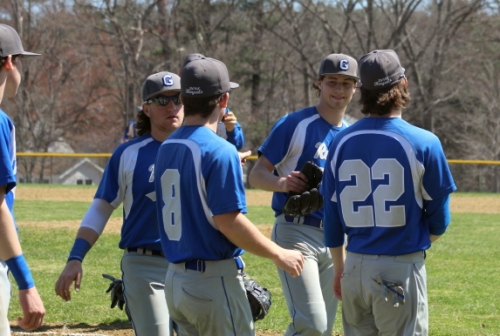 Colby Ingraham about to cross home with the first Royals run

(Amesbury MA)  Now, that’s more like it!  (That was a reference to the weather.)

Georgetown had everything go their way as they defeated Amesbury, 5-0, on a sunny Saturday morning of Cape Ann League baseball.

The Royals (4-1) rode the arm of senior Pat Slack (two hitter) and a non-stop hitting attack (nine hits) to the victory.

While G’Town had hits and stranded baserunners (nine) in every inning, the Indians went through 4 1/3 innings without a baserunner.  Nick Hawrylciw was the first to reach for Amesbury beating out (barely!) a grounder to shortstop Colby Ingraham.  Later in that fifth inning Spencer Fournier would get a no-questions-asked single to right center.  But those two hits were all that Amesbury (3-3) could muster.

Spencer Fournier (#8) had one of two Amesbury hits

Spencer Fournier’s hit to right center was only one of two balls to reach the Georgetown outfield.  Pat Slack was that dominating in the complete game shutout.  He had four strikeouts and kept the ball down.  First baseman Nick Correnti ended up with ten putouts.

Sam Burnham was charged with five runs but only two of them were earned.

The first of the unearned runs opened the scoring for the visitors in the first inning.  After Colby Ingraham doubled with two outs, AHS shortstop Ben Cullen booted Kyle Nelson’s grounder allowing Colby Ingraham to get home.

Three more runs came across for the Royals in the second inning.  Kevin Terban singled to left and was driven home by Chris Chiklakis’s triple to right center.  An infield hit to deep short by Ben Noelk enabled Chris to get G’Town’s third run.  A two-out throwing error by shortstop Ben Cullen followed adding a fourth run to the Royals’ total.

So despite all the Georgetown hits and baserunners, this could have been a much closer game minus the five Amesbury miscues.

The Royals, meanwhile, were flawless in the field with few tough chances.  Amesbury’s hardest shot, other than Spencer Fournier’s single, was a line drive toward second by Mac Short that Kevin Terban snared about shin level in the fourth inning.

Amesbury starter Sam Burnham took a hard shot off the shin in the third inning but recovered to toss the hitter out at first. 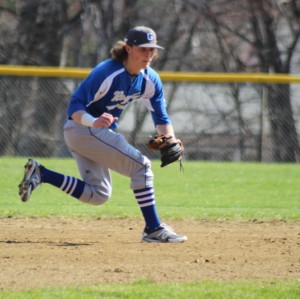 Cape Ann League All-League performer Colby Ingraham is back.  He suffered a torn ACL in football.  He has a noticeable limp but still has enough range to handle the shortstop position.  Colby almost got himself into trouble with the first base umpire when he had a loud reaction to his throw in the 5th inning that didn’t result in an out at first.  GHS coach Justin Spurr was quick to pay a visit to the field to cool things down.

Kevin Terban had two hits and scored two runs for the Royals.

I’m guessing on this one but I believe that Amesbury sophomore second baseman Jared Dupere is the brother of Sarah Dupere the very talented senior softball pitcher at Governor’s Academy.  I saw Sarah K seven Pingree batters and get three hits herself in a 13-0 shutout against the Highlanders.

Next game for Georgetown in Tuesday (10AM) hosting Hamilton-Wenham.  Amesbury will host Pentucket (3:45PM) on the same day.

The weather was terrific.  There was a pretty good crowd on hand and almost all of them were over-dressed.  It’s just hard to believe so far this season that sunny, breezy, and 60’s could all come together in a pleasant outdoor experience!

Pitcher Sam Burnham recovers after taking a shot to the shin 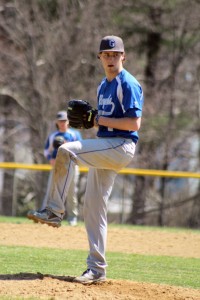 Pat Slack caught in a rundown in the third inning.