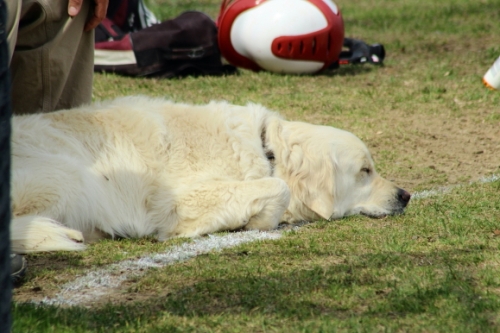 Augie relaxes between innings of the St. Marys/Amesbury softball game 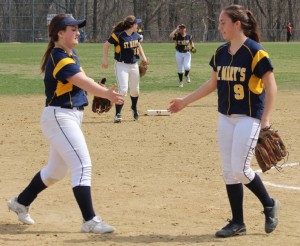 (Amesbury MA) Amesbury didn’t make a full recovery from the nightmarish 16-15 loss to Newburyport last game but their improved play was noticeable.

The Spartans pitching (sophomore Michaela Hamill and freshman Mia Nowicki) gave up seven hits but it was their ability to strand nine Indians that made the difference.  Twice St. Mary’s pitchers were confronted with bases-loaded situations but yielded just one Amesbury run.

The Spartans scored two runs in the second and two more in the sixth.  The Indians collected their lone run in the fourth. 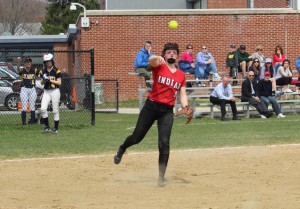 Pitcher Rachel Cyr gets one of her seven assists.

Rachel Cyr went the distance for Amesbury and pitched well.  The senior was victimized by a trio of infield bleeders in StM’s 2-run second and two walks in the 2-run sixth.

In the Spartans’ second inning, juniors Molly Doyle and Mollie Mello reached on slow rollers that neither AHS shortstop Maddie Napoli nor third baseman Autumn Kligerman had easy chances on.  (Senior Alexis Mango ran for Mollie Mello.)  A wild pitch moved both runners up and Mia Nowicki’s grounder to pitcher Rachel Cyr enabled Molly Doyle to score St. Mary’s first run.  Alexis Mango reached third on the play.  Vanessa VanBuskirk then hit a blooper over the pitcher, but in front of the shortstop, with plenty of spin on it that fell in and drove across the Spartans second run.  Nothing was hard hit but St. Mary’s was up, 2-0, after two innings. 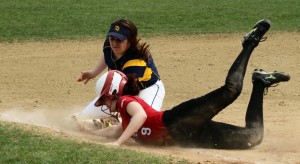 Amesbury cut the lead in half in their fourth inning and came very close to having an even bigger inning.  Rachel Cyr started things off by reaching on a dropped popup by senior second baseman Jennie Mucciarone.  Autumn Kligerman bunted Rachel to second.  Next batter junior Meagan Aponas took a full swing and got a dribbler to go down the first baseline.  None of the St. Mary’s fielders reacted to it and so Meagan reached first.  Sophomore Sammy Stone then hit a grounder back to pitcher Michaela Hamill who tried unsuccessfully to get Rachel Cyr off of third.  So Amesbury now had the bases loaded with just one out.  They did get a run as Lauren Fedorchak’s fielder’s choice scored Rachel Cyr but Michaela got freshman Maddie Napoli to pop out ending what might have been a much bigger inning.

Mia Nowicki pitched the final three innings for the Spartans.

Against Mia in the fifth, the Indians got senior Lucy Scholz (3 hits) to third with two outs but failed to capitalize.

The Spartans put up two runs worth of insurance in the sixth inning.  Rachel Cyr’s only two walks of the game proved costly.  With two outs, St. Mary’s runners (Molly Doyle and pinchrunner Jess Martinello), who had reached on walks, were on second and third.  Vanessa VanBuskirk delivered the two of them with a hard shot to centerfield.

Amesbury trailed, 4-1, with two out in the bottom of the seventh.  But the Indians didn’t go quietly getting consecutive hits from Alexi Boswell and Lucy Scholz.  Amanda Schell extended the inning with a walk loading the bases.  However, Mia Nowicki got Rachel Cyr to fly to senior centerfielder Alex Fisher to end Amesbury‘s hopes for a last-inning comeback.

Amesbury is now in Division 3 as is St. Mary’s so it was a good chance for both teams to check each other out for a possible D3 North tournament game later on.

Amesbury is scheduled to visit Ipswich tomorrow for a 10AM game……..weather permitting.

Weather?  It is nice to go to an outdoor event in April and feel over-dressed. This was one of those mornings. 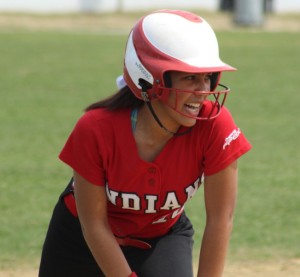 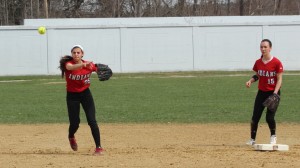 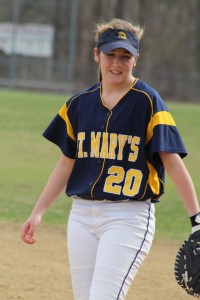 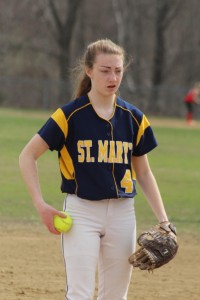