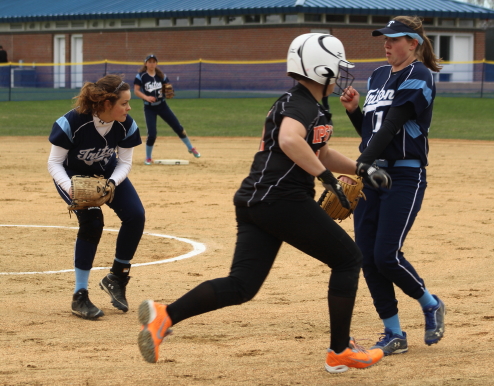 The Triton defense was flawless. Here 3B Christine Ciccone catches a foul popup

The game ended in the fifth inning when Taylor Johnson slid across after a wild pitch to kick in the 12-run mercy rule.

Mara Spears, coming off a 3-hitter in the Vikings, 2-0, win at Saugus on Friday, tossed another 3-hitter against the visiting Tigers.  Mara walked only one Tiger and the Triton defense was flawless behind her.

Ipswich put the three hits together in the second inning and got their only run as Amy Neenan drove in teammate Carolyn Lynch with a single.

The Vikings took full advantage of Ipswich walks, wild pitches, and errors through the first three innings to take a commanding, 9-1, lead.

The Vikings sent nine batters to the plate in three of the 4+ innings they batted.

Christine Ciccone paced Triton with two RBI both on walks.  Lily Anderson, Rylee Culverwell, Casey Ross, and Mara Spears had one RBI each.

The top three in the Vikings’ batting order (Rylee Culverwell, Casey Ross, Mara Spears) each scored three runs.  Mara had as many hits (three) as she gave Ipswich.

IHS starter sophomore Abby Sadoway issued nine walks in three innings of work. Five of the nine runners that scored did so on wild pitches.

Ipswich (0-5) has allowed 83 runs through five games with the large number of free passes hurting the Tigers.  IHS coach Jim Hounam (coached Triton for 20+ years) will look to turn things around tomorrow when Ipswich hosts Georgetown.

Triton has turned its season around after starting with eight straight losses under first-year coach Michele Brewer.  In the string of losses, the Vikings were on the wrong end of three one-run games.

In the 2-0 win over Saugus, Rylee Culverwell had a home run.

Triton will be at Lynnfield tomorrow (Tuesday).

Sophomore Rylee Culverwell looks like a natural at shortstop.  She played 3B last year.

Weather?  Any time you come to Triton there will be wind.  If you ever come there when it is cloudy you can expect it to be colder than you planned.

Triton used to only have a fence in right field.  It is now extended around the entire outfield.  There was no way a ball could ever be hit over that fence the way the wind was blowing in from left field this afternoon.

Shannon Lyons about to catch a fly ball

Casey Ross gets 3B as Carly Coughlin reaches for the ball 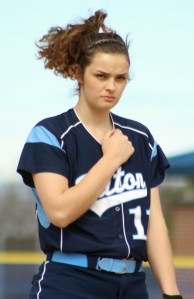 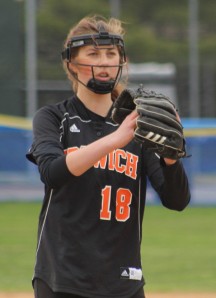 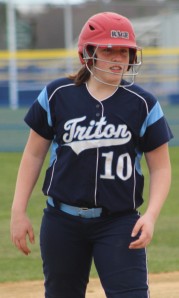