(Portland ME) I hoped for better.

I decided to take in Game Four of the Eastern League playoffs because I wanted to be at Hadlock Field when the Sea Dogs reached the EL finals.

I also wanted to get a good look at Red Sox newcomer Rusney Castillo.

Well, the Rusney Castillo part worked out.  The other part fell apart after Portland starter Mike Augliera loaded the bases with Binghamton Mets in the fifth inning with no outs.

Sea Dogs manager Billy McMillon twice signaled for relief thereafter and found none.  Mike McCarthy and Peter Ruiz?  Couldn’t have done worse.  Walks, hit batsmen, and hits, and before you knew it a 2-2 game after four innings was an 11-2 laugher two innings later.  The final score was 11-4.

It was a disappointment but there is tomorrow in this best-of-five series and that decisive game will be played at Hadlock Field.

I did get a good look at recently signed ($72 million) Rusney Castillo.  I would describe him as short, thin-waisted but powerfully built.  He never got on base in this game so I never got a chance to see any of the blazing speed he apparently has.

I am sure that Rusney is a little bit dazed by all that has happened.  He signed the big-money contract on August 23rd and then went to play in A ball in the Gulf Coast League.  Next he joined Portland.  That, so far, has meant two games in Binghamton (NY) and a seven-hour bus-ride to Portland for a 6PM game on Friday and a noon game today.  I suspect after tomorrow Rusney will move on to Pawtucket for the International League finals versus Durham.  At least it has given a lot of Red Sox fans a chance to see a highly-publicized player up close before he starts his career in Boston.

Rusney smiled at the fans pre-game but didn’t sign autographs.  He seems to have bonded with leftfielder Keury De La Cruz during his short stay in Portland.

Fortunately for me, Rusney spent his in-the-dugout time down the end where the photographer’s were.  That gave this amateur plenty of chances to get a decent picture of him.

I succeeded in getting a picture of the B-Mets Brandon Nimmo.  Brandon was a first-round pick of the Mets in 2011.  The 21-year-old third baseman can hit.  He is from Cheyenne, Wyoming. 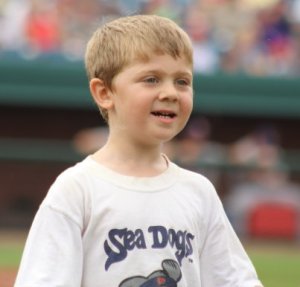 Another happy fan gets the best of Slugger

I have noted the running skills of Sea Dogs mascot Slugger every time I’m at Hadlock.  I always like his chances when I see the size of his around-the-bases running opponent.  They’re always small but never small enough that they can’t beat the easily-distracted Slugger.  Today the very social mascot found a need as the race started to get some batting tips over by the Binghamton dugout.  But he did and off raced his diminutive, full-speed opponent to a big lead.  Slugger was great once he was underway on the bases but that early chat did him in.  Why would he need batting tips anyhow?  My suggestion to the Sea Dogs management would be that his uniform number should be changed from 1 to 2 because that is where he’s finished every time I’ve watched.

Seriously, another good time at Hadlock. The visit arranged for me late Friday night by the always-affable Chris Cameron.  I really appreciate it.

A crowd of over three thousand was on hand.  The game was originally scheduled for 6PM.  Changing the time to noon avoided the showers forecast but probably forced some fans to miss the game.

I was surprised by how quiet the crowd was.  I could understand it after the team was down 11-2 but not before that.  I think that the Sea Dogs could use the boost.

Sean Coyle was hit by a pitch.  I think on the forearm.  I predict that Sean will start 2014 at Pawtucket.  Playing second base isn’t going to get him to Boston any time soon but maybe he’ll be a multi-position player like Brock Holt and Mookie Betts.

Good luck to the Sea Dogs tomorrow in Game Five.

singer of the National Anthem

Sean Coyle after getting hit by a pitch 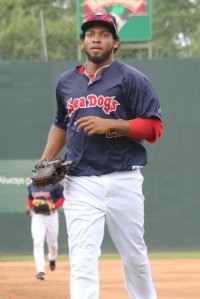 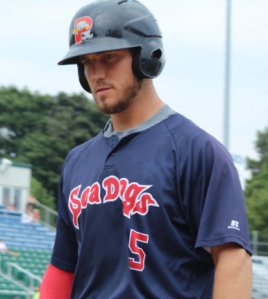 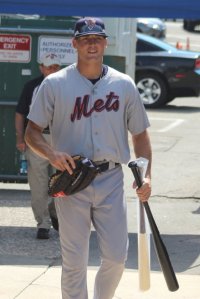