(Newtown CT) The Bethel girls soccer team opened their season with a 3-2 win over Newtown on Tuesday afternoon in South-West Conference action.

Newtown (0-1-2) fell behind 2-0 in the first half before tying the score midway through the second half.  The Nighthawks looked to be heading for their third tie of the season before a dreaded “own” goal gave the visitors the lead late for good.

The key to the Bethel win was the amazing first-half goaltending of junior Sophia Corbo.  The Nighthawks were held scoreless but believe me it wasn’t for lack of chances.  Let the pictures tell the story: 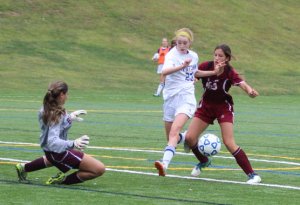 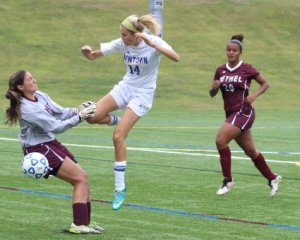 The Wildcats (1-0) had few chances in the first half but made the most of them.  Annie Bedore was able to get in very close on both her scores.  One of them came off a rebound of Alex DeLuca’s shot from the right.

Jess Keller fires a penalty kick in the second half

Newtown dominated most of the second half.  Their chances weren’t as golden as in the first half but they tied the score.  Senior Jess Keller drove a penalty kick to Sophia Corbo’s left for the first goal.  On the second Nighthawks tally, Makenna Cerney dribbled in close and then finished off her own rebound.

Makenna’s goal made it 2-2 with plenty of the second half left.  The Bethel defense began to limit Newtown’s opportunities.  Most of the play was in the middle half of the field for quite a while.

Eventually Bethel earned a corner kick from the left.  Alex DeLuca took the shot and got it into the middle in front of the net.  The ball hit a Newtown defender and suddenly changed direction whizzing past Newtown GK Megan Doyle.  That “own” goal ended up the game winner.

Nice setup at Treadwell Park for soccer and soccer viewing.

I am able to add or subtract from this write-up.  So if I missed something or need to add something let me know and I will do it.

Hannah Booth looks to shoot as the Newtown bench watches 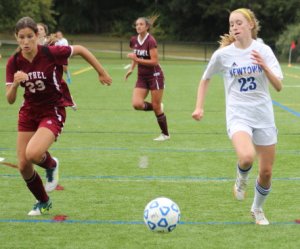 Makenna Cerney gets into position to score the first Newtown goal

Annie Bedore (#2) gets a great look

Alex DeLuca (#7) shoots from the right. Annie Bedore (#2) will get a tasty rebound off the shot 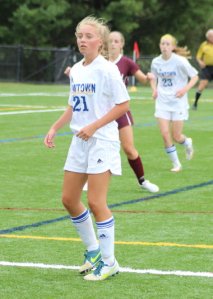