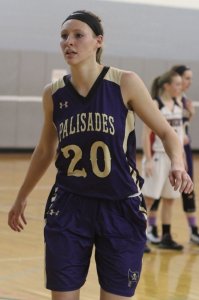 (Quakertown PA) What a second half!

William Tennent poured in forty-six points in the second half and defeated Palisades, 66-52, on Monday night to win the Quakertown Holiday Tournament.

Led by Karlee Krchnavi (31 points), the Pirates of the Colonial League East had a ten-point lead (18-8) in the first quarter and still led by three (23-20) at halftime.

But the Panthers (6-4) began running points together in the second quarter and after putting up ten unanswered points erased a 23-17 deficit two minutes into the third quarter.

The Pirates (3-4) responded with a Karlee Krchnavi 3-pointer and two free throws by Lizzie Sessinger to regain the lead, 28-26, at 5:24 of the third period.  Anyone’s game at this point.

The next 3 1/2 minutes were all Tennent and it wasn’t just the fifteen-point run they put together.  It was the defense on 5-11 Karlee Krchnavi that keyed the game-deciding separation.  Several Panthers, led by Angie Pomponio, played denial defense on Karlee and it worked.  Karlee’s touches were limited while Tennent was able to turn Palisades pressure into good looks down the other end.

Angie Pomponio (23 points) paced the team from Warminster with two 3’s, and tightly defended drives to the hoop.  Karlee did reject one of Angie’s drives to the basket.

Kyla Gibson (20 points) tallied fourteen in the second half and was on the money end of several nice passes from Alyssa Christiansen.  Kyla also connected on two 3’s.

Three of Tennent’s six three’s came during the 15-point breakaway segment.  The Panthers from the Suburban One Conference finished the scoring surge up, 41-28, with two minutes left in the third quarter.  The team from Kintnersville never recovered.

Karlee collected ten of her thirty-one points in the final four minutes of the game but the Panthers cashed 10-of-12 free throws in the end game to maintain separation and win the championship.

Angie Pomponio was injured early in the third quarter but returned later. 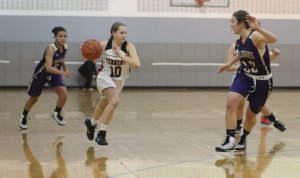 Both Alyssa Christiansen and Kyla Gibson fouled out.

During the 15-point, game-decider PHS coach Dean Reiman pulled his five starters for a minute or so.

The game was played at the Strayer Middle School in Quakertown.

Unofficially, Tennent had sixteen turnovers while Palisades had twenty. 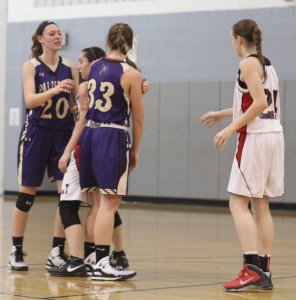 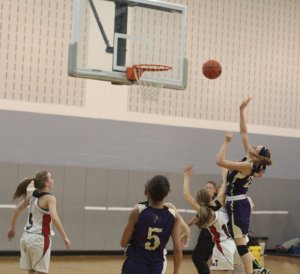 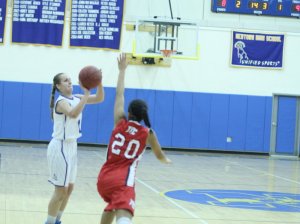 In the end it was Mali’s Newtown Nighthawks defeating Jana’s Masuk Panthers, 59-52, in a non-league girls’ game on Tuesday night.

Newtown (4-1) took the lead for good in the second quarter on a three by junior Haley Ryan.

Mali Klorczyk drained three 3’s in the third period to raise the N’Town advantage to thirteen but Masuk (1-3) rallied back.  Seven unanswered points to start the final quarter had the Panthers one shot away at 39-36 with six minutes to play.

Lauren Wilcox (16 points) gets in close

The pace was hectic throughout.  In the first half the pace troubled both teams as there were  missed shots and turnovers galore.  The teams combined for fifteen turnovers in the first quarter alone.

The Hawks put Masuk in some serious trouble in the third quarter with eleven straight points in a two-minute segment.  Mali Klorczyk converted a rebound and nailed two straight three’s during the breakaway run.  Mali ended up with thirteen points in the quarter.

Senior Jana Migliaro did her best for Masuk to keep the Panthers in the game.  She made three’s, drives, and free throws while every Hawk seemed to take a try at containing her.  She drove fearlessly and ended up making twelve free throws.

I was impressed with the Newtown passing in the second half.  With Masuk trapping the ball, there were openings to be found in close with consecutive passes.  Lauren Wilcox (16 points) cashed in from in close seven different times.

The basketball games I see (in Massachusetts) are played with a shot clock.  Without that clock, teams have to be able to pressure an opponent and be able to handle pressure.  A coach where a shot clock is used (Massachusetts) can hide players on offense or defense but not in Connecticut.

I liked the idea of having team captains (Sarah Lynch and Jenny Skoog) recite the crowd conduct requirements before the game.

Kelly Merrick went out in the third quarter with a leg injury.

Newtown was 10-11 last year after winning the state championship in 2012.  This year’s team has one senior (Sarah Lynch).  The 2014-15 Hawks could be headed for some good things in the post-season if tonight’s combo of speed, passing, defense, and 3-point shooting gets perfected.

Underwhelming foul shooting by both teams.  Newtown was 9-for-21 while Masuk was 15-for-26.  My theory on poor foul shooting is that players practice 3-point shooting a lot more than free throw shooting.

I continue to be surprised by the number of baskets scored on inbounds plays.

Next game for Masuk is hosting Bethel on Saturday at 7PM.

Newtown returns to action on January 3rd on the road at Saddle River School in New Jersey. 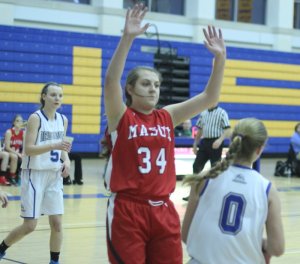 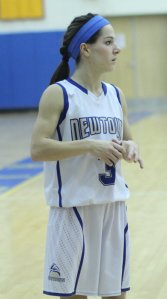 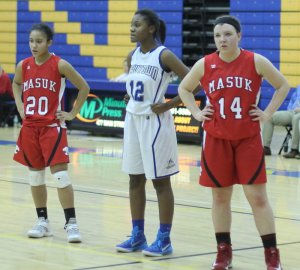 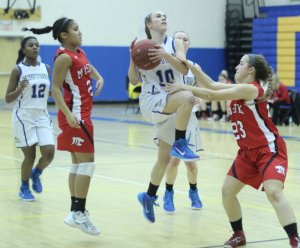 Sarah Lynch (10) goes down the lane

Strong second half gets Masco a win over Newburyport 59-33

Meghan Collins had 18 points, 12 rebounds, 3 assists, and 2 steals for the Lady Chieftains

(Newburyport MA) Masconomet ran away from Newburyport in the second half and defeated the Clippers, 59-33, on Friday night in Cape Ann League play.

The Newburyport (0-2) deficit was only six (22-16) after junior Emily Pettigrew (16 points) broke free thanks to a nice pass by Shelby O’Brien early in the third quarter.  However, consecutive three’s by senior Lauren Sorel (13 points) sent the Lady Chieftains off on a 24-6 run that stretched into the final quarter.  Senior Meghan Collins (18 points) added nine points in the breakaway segment.

Newburyport was hurt badly by turnovers……twenty-two by my count.  At least half of the TO’s were unforced.

The Clippers wanted to get Emily Pettigrew (6′) as many touches as possible.  Emily had 24 points in the Clippers opening game loss to North Reading.  Masco’s Kate Kitsakos (16 points) covered Emily tightly and, despite giving away five inches, made passes inside difficult.

Meghan Collins (First team CAL All-Star last year) had a terrific second half for Masco.  Meghan had twelve points in the final quarter hitting from long range and driving to the basket.  The 5-7 senior guard also collected twelve rebounds for the Lady Chieftains.

Masco continued with the solid man-to-man defense in the second half and when their shots started falling the Clippers were doomed.  Masco’s good outside shooting forced the home team to expand their defense opening up drives to the basket for the visitors.  Meghan Collins and Kate Kitsakos were quick to take advantage.  The Lady Chieftains ended up with twenty-eight points in the paint.

Meghan Collins found foul trouble in Masco’s loss in their opener to Pentucket but not this time.  Teammate Stephanie Mini had three fouls in the first half versus Newburyport and saw her playing time limited as a result.

Both teams were underwhelming at the free throw line.  NHS was 9-for-19 while Masco was 6-for-16. 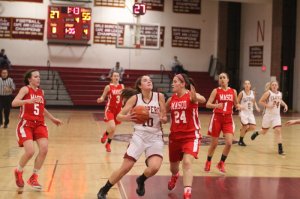 Lauren Sorel clicked three times from long range against Pentucket and Newburyport.  Someone better start yelling, “Shooter!” when she gets the ball.

Thanks to Andy Tapparo, who runs the Masco Girls Basketball website, for help with statistics.

Next game for Masco is home on Monday against Triton.  Newburyport will be on the road versus undefeated Pentucket on the same evening.

The Clippers of Coach Gregg Dollas were 13-7 last season while Bob Romeo’s Lady Chieftains were 21-2.

Any errors?  Let me know.  Blogs are very easy to edit.

Stephanie Mini gets to the basket

Morgan Johnston and Lauren Sorel (13 points) look for a rebound 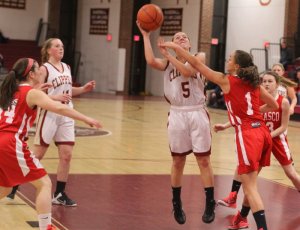 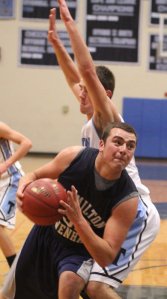 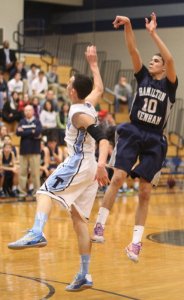 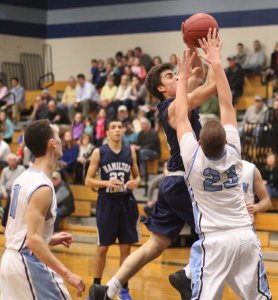 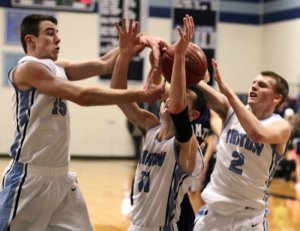 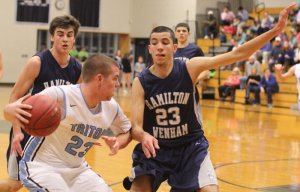 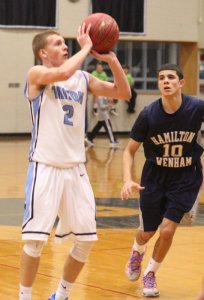