The Hornets (7-8) had a very slim, 55-54 lead with 1:12 left but capitalized on a Viking rebounding foul (Luke Reineiger) and a converted offensive rebound (Adam Goldstein) and put five straight points together to win the game.

Later the Vikings would erase a 30-20 deficit with a 17-1 run that gave the home team a 37-31 lead with three minutes left in the third quarter. Nick Venora (19 points) tallied nine points in a lengthy stretch of solid offense and defense.

Cam Armand started the final quarter with a three to get Triton up by four (44-40).

The key to the North Reading win? Twice in the last quarter the Hornets turned misses into point-producing offensive rebounds. The first time it happened senior Gerard Walsh punished Triton with a three after a teammate rebounded Gerard’s missed free throw to get NR ahead, 52-48. Later it was Adam Goldstein (12 points) converting a missed free throw into two points with a rebound to increase the Hornets’ lead to 58-54 with fifty-four seconds to go.

The Vikings opted for the quick fix 3-point attempts but came up empty on all three tries down the stretch. 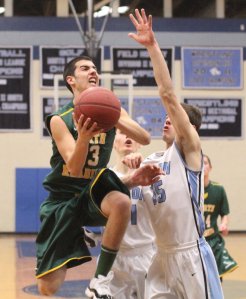 North Reading won despite twenty turnovers and thirteen (10-for-23) missed free throws. The Hornets miscued on eight freebies in the final quarter.

The Vikings had a very cold shooting night from the field. They did make four 3’s but needed several more in this one.

North Reading won the first match between the two teams in December, 62-40. Adam Goldstein had 21 points in that NR victory.

The Hornets ended a two-game losing streak. They play Notre Dame Cristo Rey (Lawrence) on Thursday and at undefeated Hamilton-Wenham on Friday.

Hamilton-Wenham routed Triton by thirty-nine points on Friday. Marcus Zegarowski had thirty-one points in that one. HW had only won the previous meeting between the two teams, 51-44, in December.

The Vikings will be at Masco on Friday night. 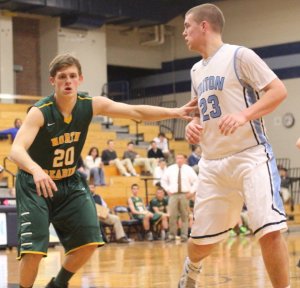 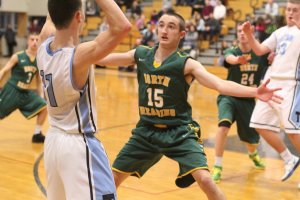 Gerard Walsh defending had two 3-pointers in the 4th quarter 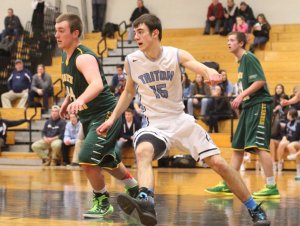 Conor Henry tries to get position on Nick OConnell 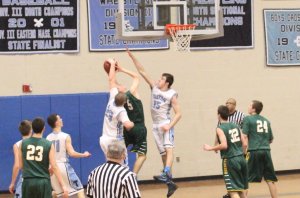