(Salem MA) This was anyone’s game until Beverly put fourteen unanswered points together in the second half and defeated Salem, 56-46, in Division 1 North first round action on Wednesday night.

The Panthers (15-6) will play the winner of the Woburn/Arlington game.

Beverly was intent on keeping the ball away from overpowering Jackie Panneton on the inside while Salem (14-7) wanted to heavily defend Beverly’s long-range shooters.  Both succeeded.  The difference was that Salem didn’t have the outside accuracy to compensate for the shutdown inside game.  Beverly, on the other hand, shot fewer 3’s but took the ball to the basket for scores or fouls.

The two teams had split their two meetings during the regular season and tonight’s game ended up at Salem because they won a coin toss.  It figured to be a close game and with three minutes left in the third quarter that is exactly what it was, 32-32.

The next seven minutes of playing time, stretching into the 4th quarter, were all Beverly.  The visitors registered fourteen straight points and the Witches never recovered after trailing 46-32.

In the breakaway segment senior Ashley Augulewicz converted two rebounds and had a layup off a nice assist from teammate Jess Cross.  Sophomore Natalie Mellinger drained two three’s from in front of the Panthers’ cheering section.  Junior Melissa Lubas added a drive-and-one that fouled Salem senior Rachel Zipper out of the game.

The eventual final outcome seemed unlikely to those of us on hand for the first quarter.  Beverly was determined to launch long ones and Salem’s defense wouldn’t allow it.  Meanwhile it was Salem making 3’s (two by Rachel Zipper in the first quarter) and getting the ball inside on occasion to Jackie Panneton (4 points).  Salem led 14-6 after a quarter.

Beverly started the second quarter with ten straight (six points by Natalie Mellinger) and got the lead but Salem answered with seven straight including a three by junior Nicole Sadoway to retake the lead.  Salem was in front 23-21 at the half.

In the third quarter the teams worked themselves into a 32-32 tie before Salem suffered a disastrous drought and never recovered.

Brianna Rodriguez tallied ten points for the Witches in the final quarter but Beverly made eight-of-eleven free throws to carry off the win.

I was impressed with the play of junior Melissa Lubas of Beverly.  She had a few more turnovers in the front court than I would have liked in a point guard but everything else was very good.  Head-up dribbling, long-range passing, rebounding, and 9-for-10 free throw shooting are a nice collection of positives. 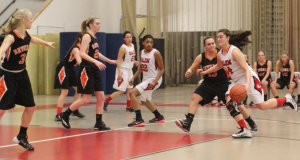 Beverly had lost three of their last four.  They do have wins over the division leaders (Revere and Winthrop) in the Northeast Conference.

Jackie Panneton scored her 1000th point in Salem’s last game of the season. 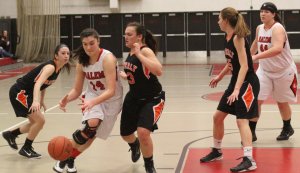 Melissa Lubas looks for someone to pass to 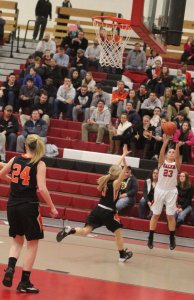