Justin Haley makes an easy toss to first. Justin allowed one hit during his seven innings of pitching.

Manuel Margot runs off the field

(Portland MA) Justin Haley (5-13) had the game of his life allowing just one hit during a shutout seven innings on a sunny Thursday afternoon at Hadlock.

The noon start brought out campers galore on a perfect baseball afternoon.

The battle of the cellar dwellers from each of the Eastern League divisions turned into a pitcher’s duel between the SeaWolves Tommy Collier and Boston’s 6th round pick in 2012.

This game gave me another chance to get some pictures of centerfielder Manuel Margot. Manuel is 7th on the Boston prospect list.

I am also starting to take notice of first baseman Sam Travis. Sam was a 2nd round pick in 2014. He has been solid in the field and at bat and should start in Pawtucket next year.

One player I didn’t get to see was pitcher Michael Fulmer. Michael came to Detroit recently in a trade with the New York Mets. The Tigers also got a couple of other quality minor leaguers in recent trades. The Detroit Free Press described the Tigers farm team as the worst in baseball before the trades.

I have learned to expand my picture taking to as many players as possible. Why? A couple of years ago Travis Shaw was just another Sea Dogs’ player. Xander Boegarts was the one to get…….and I got plenty of him. I did manage a lone shot of Travis and didn’t even recall that I had taken it! So some of the players pictured may be not well known now but who knows about later.

Slugger was in big trouble today. His opponent was a young 7-year-old named Cru. I heard Cru described as “fast” by someone who was with him. That proved to be true. Slugger had one of his cleanest runs but just never was even close to making things close. One commendation for Slugger, however, was that despite a life-time losing streak he displayed wonderful sportsmanship afterwards by congratulating the youthful winner. 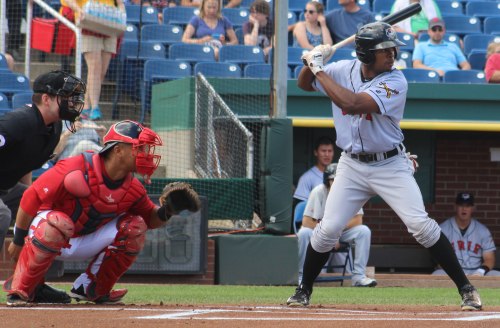 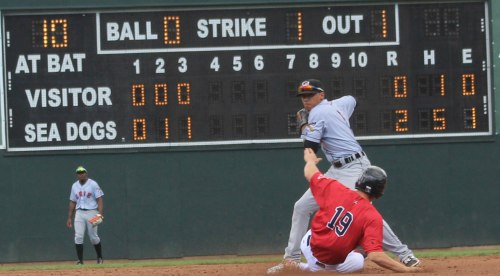 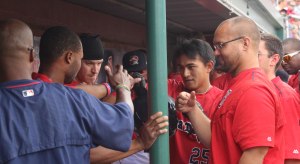 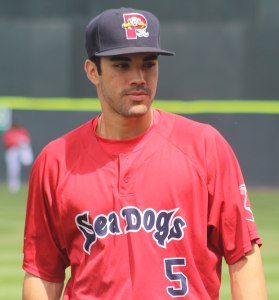 Manuel Margot in the dugout 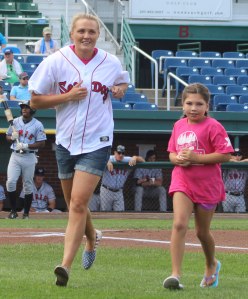 Dean Green (big numbers in the Eastern League this season)