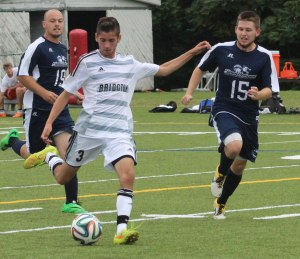 Jack Kingdon lines up his goal

The Wolverines (1-0) scored goals midway through each half and used their speed and accurate passing to advantage often.

The Seawolves (1-2-1) from South Portland had few scoring chances but trailing by just a goal through 20+ minutes of the second half they nearly tied it on a shot by DJ Cloutier.

Shortly thereafter Jack Kingdon (Nonnewaug High CT) split two SMCC defenders for a clean look and whizzed a shot past defenseless GK Drew Martin to give BA a 2-goal cushion for the rest of the game.  That 2-goal lead looked to be in potential difficulty during the final twenty minutes of the match as the Wolverines played one player short and later two players short due to injuries and an empty bench.  Noticeably good passing and unselfishness by BA kept SMCC from capitalizing on their plus numbers.

The Wolverines style of play set up plenty of scoring chances during the even strength portion of the game.  Only thing missing was finishing but the longer you watched the better you liked the chances for that to happen.

SMCC was forced to do a lot of chasing and had limited chances to move forward using short passes.  The Seawolves used the long ball to set up their scoring chances.  BA goalkeeper Andrew Mortarelli had several dangerous shots to deal with but he was able to stand his ground and get the shutout.

BA’s Justin D’Orlando (Masconomet Regional MA) was excellent on defense. At 6’6” he had a head on several lobs that came close to the BA goal.

Justin had a fluke goal (in my opinion) in the first half. He was set up for a direct kick close to the left sideline about 25 yards out. SMCC had a 3-man wall in place but it didn’t have the entire goal covered. Justin kicked a hard grounder past the wall. Defender DJ Cloutier just missed intercepting the ball and Justin’s grounder rolled into the far corner past GK Drew Martin. How often does a direct-kick grounder get into the goal untouched? 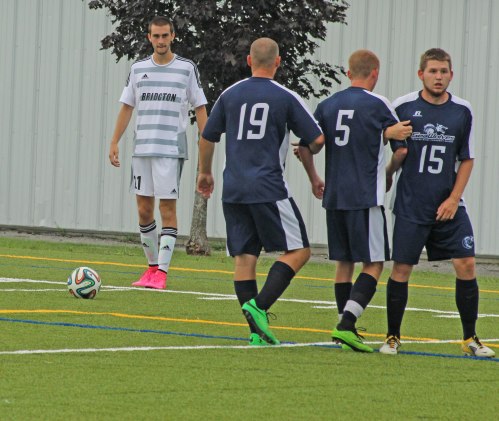 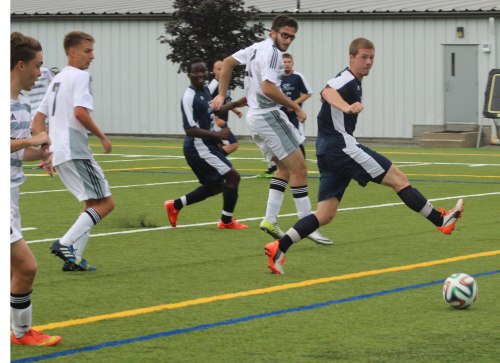 I was impressed with SMCC defender Hughes Bakunda. He was tireless with a strong foot. 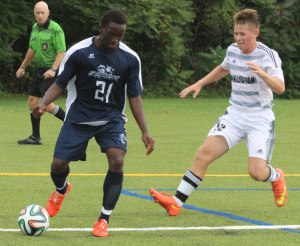 The Wolverines weren’t shy about pressing the attack and were disciplined enough to never be called for an offsides.

SMCC’s next game will be at home on Sunday against UMaine-Machias. On the same day BA is in Newark, New Jersey playing St. Benedict’s Prep.

Surprised that BA had no one available to chase balls that left the field. That arrangement was certainly an advantage for the home team in the lead and the game ball rolling into the woods.  Solution?  Either have people chasing the balls or have twice as many soccer balls available.

A baseball game was going on at the same time.

Why is this report so late?  I attempted to put this story with pictures together while watching the Patriots.  The Patriots won but the timeliness of this story lost. 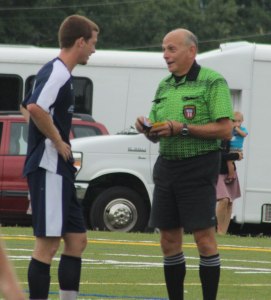 DJ Cloutier gets some advice

Noah Medeiros leaps to get by SMCC defender Jacob Cavacas