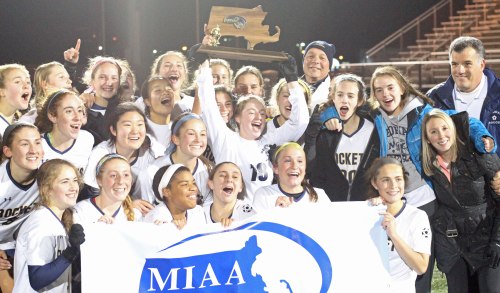 (Lynn MA) The Needham Rockets went up 3-0 in the Division 1 title game eight minutes into the second half and cruised to 3-1 win over the Algonquin Tomahawks for their first state title in thirty years on Saturday at Manning Field in Lynn.

Senior Kathleen Rizzo put back a rebound to put the South champs up by two just two minutes into the second half.

Algonquin’s senior Caroline Leonard rammed home a rebound with fifteen minutes to go to narrow the Rockets’ lead to 3-1.

I was very impressed with Needham defender Dee Picou. She didn’t just blast balls out of the zone, instead she cleared to teammates and several times carried the ball into the T-Hawks end.

The Rockets (22-0-2) had the best chances to score. Credit their speed and passing ability.

That first goal was very impressive. My picture shows Crea Baker-Durante with an open look at Algonquin goalie Lauren Commarando. Some girls would rip a hard shot at the goal. Not Crea. She got the ball into a sweet spot in front of the net and teammate Rachel Kingston had plenty of open net to shoot at.

Crea Baker-Durante in on goal 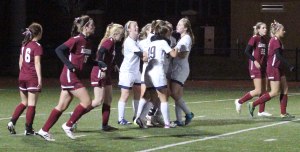 That goal, fifteen minutes in, showed how dangerous that two-some could be. Sure enough, in the second half Crea and Rachel combined the same way (nice centering pass, plenty of open net from a shot down the middle) to put up a three-goal cushion.

At that 3-0 juncture with thirty-two minutes left, things were more than a little dire for the team from Northboro. The Rockets had only allowed six goals total in their previous twenty-one games. Credit the Tomahawks for getting a goal because there was no letting up by Needham.

Algonquin (21-2) had lost in the Central finals three straight years before getting to the state finals this year.

Needham had lost three straight years in the South semifinals before taking the state title today. 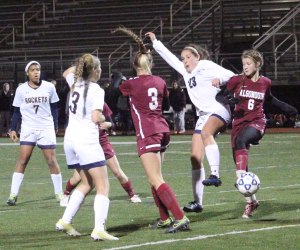 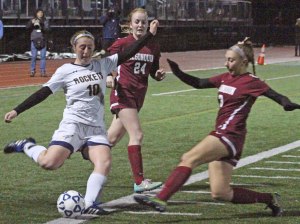 Driving toward the Needham goal 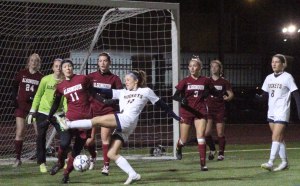 loose ball in front of the Algonquin net