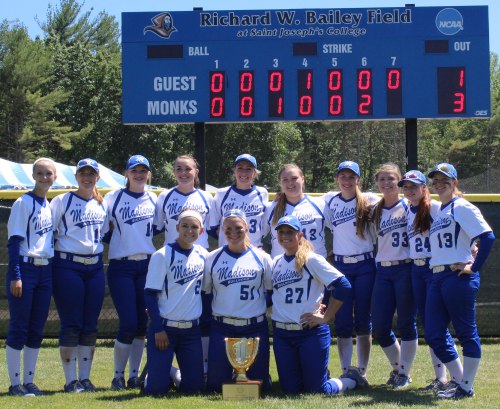 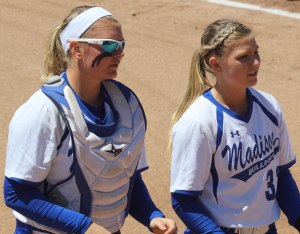 (Standish ME) Madison capped an undefeated season with a Class C title win over Bucksport, 3-1, on a sunny Saturday afternoon at Bailey Field on the campus of St. Joseph’s.

This game was tied at 1-1 into the bottom of the sixth inning before a second-life triple by senior Aly LeBlanc gave Madison the lead.  Senior Erin Whalen followed immediately with a sacrifice fly to left and the Bulldogs had a two-run cushion.

Winning pitcher, junior Madeline Wood, kept the ball in the infield for the final three outs and the celebrating began for the 20-0 Bulldogs.

Kate was 12-0 for the season coming into the championship game.

Madison put a run on the board in the bottom of the 3rd inning.   Sophomore Aishah Malloy drilled a line drive into the gap between center and right and turned it into a no-out triple.  One out later, senior Kayla Bess hit a ball to left of Bucksport shortstop Darian Jellison and Aishah took home on the fielder’s choice. 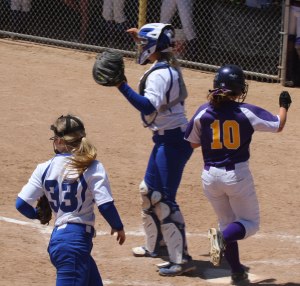 The Bucks (19-2) answered with a run in the top of the 4th inning.  An infield hit (Eliza Hosford) and a well-placed bunt (Darian Jellison) gave Bucksport two runners with no outs.  Those runners would advance to second and third with no outs on a passed ball and a stolen base.  Two outs later the runners were still in the same places but Kate Saunder’s sharp single to right on the ground delivered Eliza.  A quick relay in by RF Aishah Malloy kept the runner on second from trying to score.  Pitcher Madeline Wood K’d Kaylee Grindle to end the threat.

Bucksport started the 6th inning with a bunt single (Darian Jellison) in a tie game.  Key play in the game?  Rightfielder Aishah Malloy stabbed a well-struck line drive at the top of her glove hit by next batter Julia Zavalza.   If that gets over Aishah, Darian scores from first and Bucksport would have had the lead.

In Madison’s game-winning bottom of the sixth, junior Madeline Wood led off with a walk.  Good place for Aly LeBlanc (one of the nine finalists for the Miss Maine Softball Award) to get an at-bat……..if you’re from Madison!  During the at-bat Aly hit a very high popup behind the plate that catcher Makenzie Smith had a chance at but dropped.  That second life was all that Aly needed.  Next pitch she hit a rope over Kaylee Grindle’s head in right.  Madeline Wood scored easily while Aly slide safely into third with no outs.  Aly would add Madison’s third run of the game on Erin Whalen’s fly to left.

Those two runs proved to be the difference in this one. 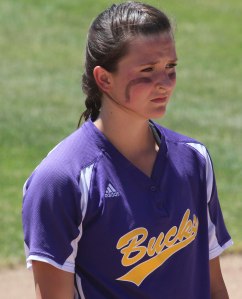 Aly LeBlanc will be playing at Division 2 Augusta College (GA) next year.

Last time Bucksport lost (before today) was on May 18th versus Orono.

I had a nice pressbox view of the game on a very sunny afternoon. 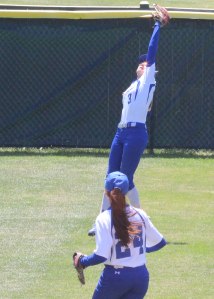 Last year I saw Yarmouth defeat Hebron at the same site for the Class B championship.

Not quite sure how Madison ended up in the South geographically speaking.

Madeline Wood before the game.

Aishah Malloy on her way to third

Aishah Malloy about to cross with the first Madison run 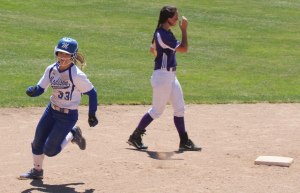 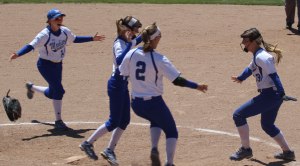