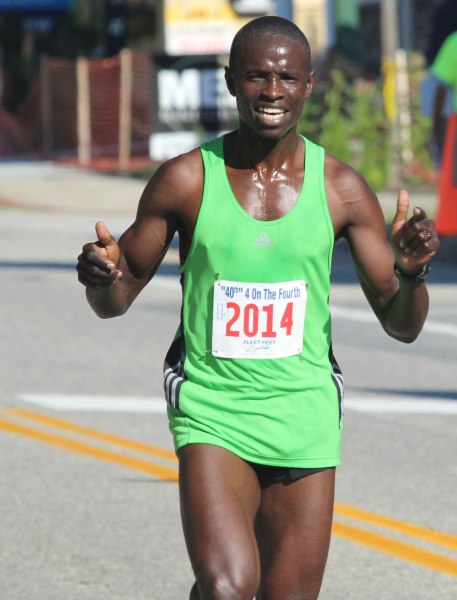 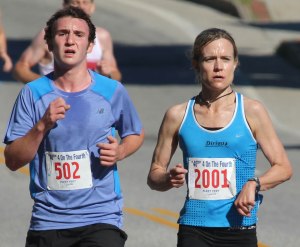 (Bridgton ME) Moninda Marube won the Bridgton 4 on the Fourth for the third time in the last four years on a warm Monday July 4th morning.

In all three wins, Moninda has not been in any kind of competitive danger coming down Main Street.

In the other two wins, Moninda was still tight to the task along Main Street but not today.  He was smiling with thumbs up at the Bridgton Library well aware of Jim Johnson (2nd place finisher) being too far back to catch him.

I had hoped that last year’s winner (Andrew Stewart) would be in the field because if time’s mean anything the race down Main Street would have been close.  Maybe next year?

The 40th anniversary of the race had a special ring to it because previous winners were invited back.  Those that attended were given the racing bib number of the year they won the event.  Nice touch. 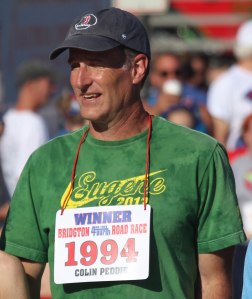 I think you will need two very good runners in the race to push each other to a run at that 18:46. Moninda was able to win today’s race with a “leisurely” time of 20:41.

Jim Johnson took second.  Jim is from Madison (NH) and has been the New Hampshire Snowshoe’s Champion for the last eight years.

Silas Eastman (2012 winner) was third.  Silas was sporting the Colby colors.  He is a senior in the fall.  His parents were part of a storytelling performance that was at the Brick Church (Lovell) on Friday night. 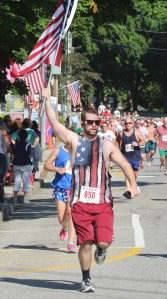 Nate Richards took fifth.  Nate is a senior at Principia College in Illinois.  Nate was 3rd last year.  He is currently a counselor at Camp Newfound in Harrison.

Chris Dunn, from Kennebunk, took 8th.  Chris was a senior as Southern Maine this year.

Andy Spaulding is a former winner (2002).  He ended 10th today. He is part of the management of the Dirigo running club.

Former winner Kristin Barry (2001) returned in style to finish first among the women and 31st overall (24:32). 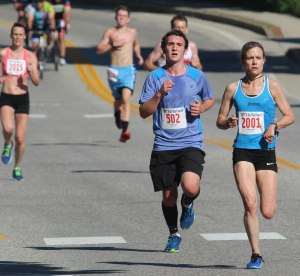 Erin Flynn had Kristin in her sights coming down Main Street but ended up settling for 2nd, finishing some eleven seconds after Kristin.  Erin won this race in 2009 and 2015.

The race is always fun to attend.  The surrounding camps are well represented and some of the counselors are high-quality runners.  Plenty of patriotic stuff among the participants.  I especially admire those who run and chant down Main Street after running 3+ milein 80-degrees heat.  Oh, to be young!

The highly competitiveness in this race ends pretty early after the top runners have gone by.  Many of the remaining runners look for familiar faces in the crowd.  I did see one young man leave the race, run up the stairs of the Bridgton Library, and plant a kiss on what I hope was a significant other.  My camera was not fast enough to catch that action! 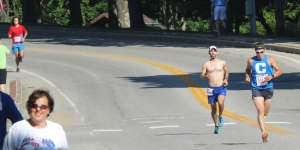 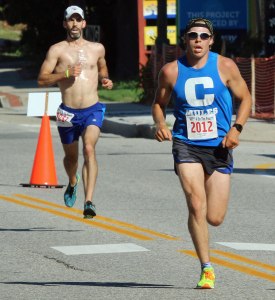 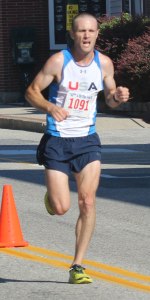 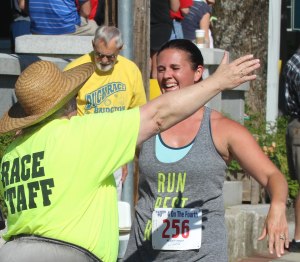 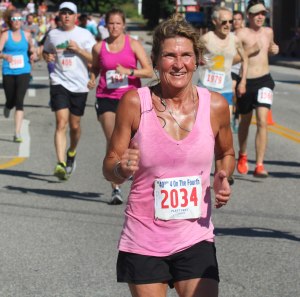 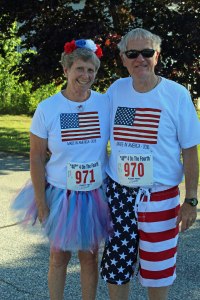 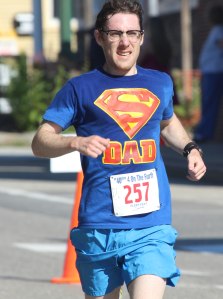 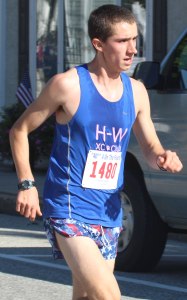 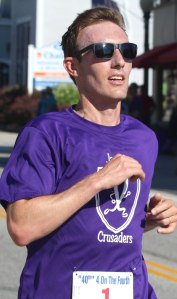 Mike Brooks with bib Number One

Filed under Bridgton, Bridgton 4 on the Fourth