(Portland ME) Any win over the Yankees is a good win.  And Portland got one, 4-3, over Trenton on a nice Thursday evening at Hadlock Field.

I was surprised that Yoan Moncada was still with the Sea Dogs so I opted for one last look at Boston’s #1 prospect in action.

Yoan is playing third these days so I chose the edge of the Trenton dugout as the spot where I would take pictures from.  I saw him make a real nice fielding play from that location. 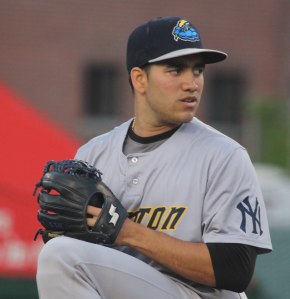 Ronald Herrara (21) started for The Thunder

I had good feelings about the pitching matchup between Portland’s Mitch Atkins and Trenton’s Ronald Herrera.  Both pitchers are in the top four of the Eastern League in strikeouts so there were plenty of missed bats in this one.

Mitch ended up with ten K’s and the win.

I came to see Yoan Moncada, and I did, but the more I see of shortstop Mauricio Dubon the better I like him as a prospect.

Kevin Thomas (Portland Press Herald) had an interesting comparison between Mauricio and Mookie over a similar sampling of games at Portland.  The numbers put up by both players are very, very similar.

But we’re talking about a shortstop.  What are Mauricio’s chances of moving up with Xander and Marco Hernandez ahead of him?  Maybe Mauricio will start to work out at 3B??

Back to Yoan.  Having seen Andrew Benintendi at Portland I can tell you that their hitting styles are very different.  Andrew was patient.  Yoan is aggressive.  There are lots of strikeouts in his future unless he gets more selective.

Mauricio Dubon has dazzled at Portland

The win was a sweet one for Portland because it sets Trenton’s playoff hopes back a bit.  The Thunder still have a very nice 81-50 record.

I noticed that Trenton has really gone with young players.  The four top prospects on their roster are 22-years-old and younger.

Portland has a few young players but many of the other starters are 25+.

I mentioned Mauricio Dubon and I also must mention Aneury Tavarez.  The Portland rightfielder is leading the Eastern League in batting average and looks to have a bright future.  Expect him at Pawtucket to start 2017.

The most fortunate person at Hadlock tonight was Mike Davis of Falmouth.  Mike bought a ticket and came through the gate as fan #9 million.  That got Mike a Sea Dogs’ jersey with a “9” on it plus nine years of season tickets.  His daughter, Wagner, threw out the first pitch of the game.

Slugger?  Of course he lost.  That’s what he always does.  Sometimes the big guy gets up against a little kid who isn’t sure what bases to run to.  Not tonight.  This kid was a dart and he knew exactly what was going on.  By the time Slugger reached second this kid was close to third.  It was no contest.  Slugger even tried some aerodynamics but it was futile.

The inflatable horse race was interesting.  One of the contestants was too short and her feet didn’t touch the ground.  There was no way she was going to be able to get that horse to go anywhere.  So one of the Sea Dogs’ staff members pulled her toward the finish line.

Thanks again to Chris Cameron for arranging tonight’s visit.  Hadlock continues to be a great spot to visit to seeing rising baseball stars as well as to get entertained.  Tickets are a bargain.

Mark Payton touches them all after a 2-run homer 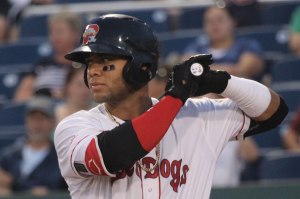 Miguel Andujar is the Yankees’ #8 prospect

Mauricio Dubon caught in a rundown after driving in a run