Masco runs streak to four with 15-14 win over Triton

Time left on the clock when the game resumed

(Byfield MA) Josh Anderson of Masco stopped one Triton drive with a fumble recovery and ended the game by tracking down elusive Vikings’ QB Lewi L’Heureux.

Josh’s heroics on Saturday night were part of the resumed ten minutes of the Cape Ann League matchup.  The night before thunder/lightning put an immediate halt to the game with over ten minutes still left.

Triton (5-2) started the resumed play with the wind in its face and a 4th down on their own ten yard-line.  A gutsy pass play worked between Lewi L’Heureux and Tom Lapham to extend the possession for the Vikings.

In that extended possession, however, Lewi L’Heureux fumbled the exchange and senior Josh Anderson made the recovery.

Masconomet (5-2) followed with several clock-killing first downs aided by a nice scramble by QB Declan Judge and some well-blocked runs by Tim Beliveau.

Triton did get the ball back on downs in the last minute but the combo of wind and Masco’s prevent defense would not allow the home team to get out of the own end.

The game concluded with Lewi L’Heureux scrambling left and then right before Josh Anderson caught up to him and ended the contest.

I was impressed by the number of folks who came out on a cold/windy night to watch ten minutes of football.  The final ten minutes lasted only twenty minutes.

Will Hanson (28) chases Tom Lapham out of bounds

Triton QB Lewi L’Heureux runs for his life on the last play of the game.

The celebrating begins for Masconomet 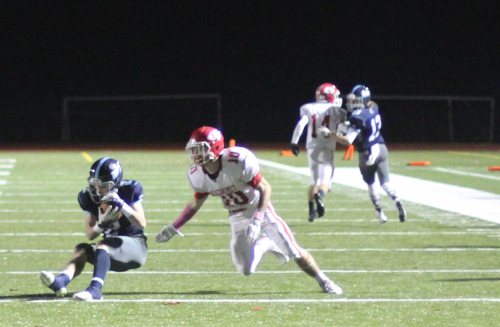 Ball on the ground with Josh Anderson (47) set to recover

Tim Beliveau (23) heads up the middle