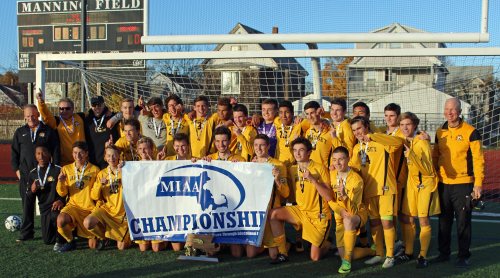 (Lynn MA) It wasn’t a perfect season but it was perfect enough for Nauset as they defeated Masconomet, 2-1, to win the Division 2 state title on sunny Saturday afternoon at Manning Field.

The 23-0 Warriors came into the final game not having allowed a single goal all year.  That season-long shutout was put to an end by Masco’s Mike Budrewicz in the first half.

Mike’s goal tied the score and certified that the Chieftains could stay with the team from the Cape.

“Masco was the best team we faced,” said Nauset coach John McCully afterwards.  “They were athletic, matched up well, and had the good player (Bryan Gilbert) on top.” 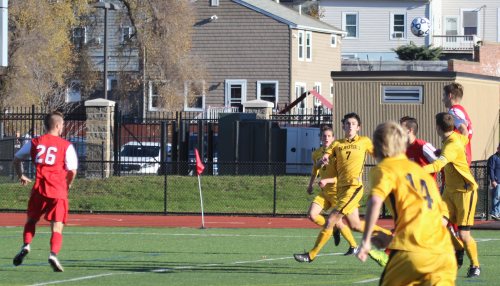 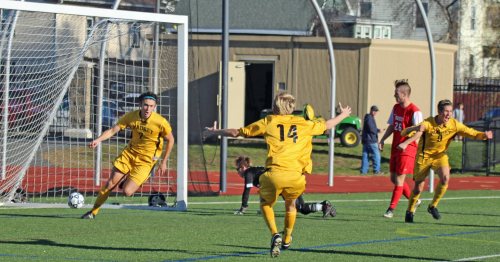 Knowing the shutout record of Nauset and the quickness of the first goal, I assumed that things would go downhill for the team from Boxford in a hurry.  I was seriously mistaken!

Masco (21-3-1) was able to get into positions where a goal could happen numerous times.

At 25:38 of the first half, Masco evened things.  A wonderful pass by Bryan Gilbert from the right, set teammate Mike Budrewicz in the middle.  My picture shows Mike with a good look and Nauset GK Jack Avellar hidden behind a defender.  Mike kicked toward the left corner and Jack couldn’t see the shot at first and then couldn’t react fast enough when he did.

The Nauset coaching staff considered calling a timeout after the goal but didn’t.  “We average five goals a game so even if we gave up one we figured that we still had a couple more in us, “said Coach McCully.

The game-winner occurred at 28:35 of the second half.  The ball got to James McCully (from Hayden Yakola) in the middle.  My guess is that James’ quick shot came from about thirty-five yards.  He hit is with his left foot and the hard grounder sped by Masco GK Derek Davidson.  Coach McCully thought that the shot had been deflected by a defender.  It may have been.

That one-goal lead with over twenty-eight minutes to go looked anything but safe.  Both teams pressed to score and both teams came close.

Sophomore Abdel Talabi blocked a second-half, Masco doorstep attempt that could have tied this game. 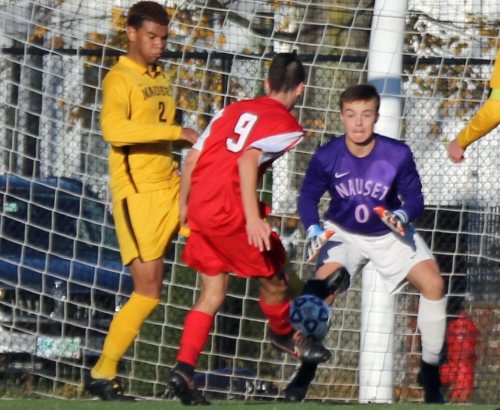 But Nauset held on and won their first state title since 1979.  Coach McCully was on that team.

Coach McCully also holds the Nauset season-high goals record with 39.  His son James reached 38 with today’s two goals.  “We said that we would bench him if he tied the record,” joked Coach McCully afterwards. 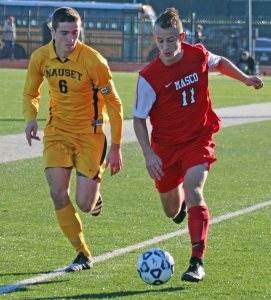 Tremendous crowd representing both schools.  First time I’ve been to Manning Field where they opened up the stands behind the players’ benches for spectators.

This is the second straight time Masco has lost in the state title game.  They have won the D2 North championship three of the last four years.

Nauset scored 108 goals and gave up only one this season.

Action in front of Nauset net 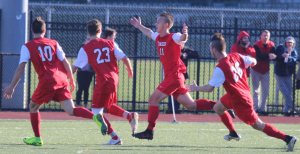 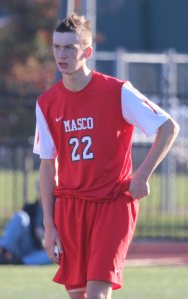 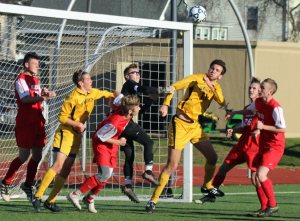 Action in front of Masco net 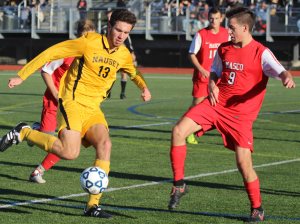 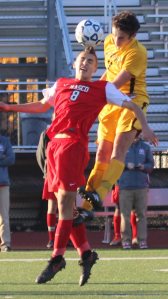 Matthew Dzwil (8) battles in the air