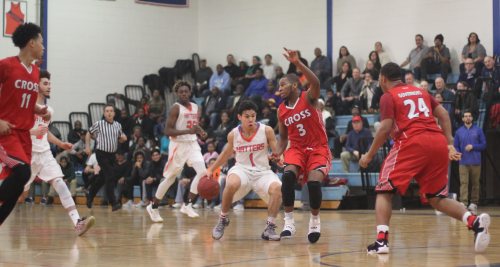 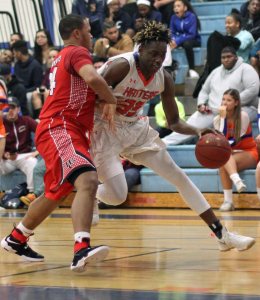 On March 15th Danbury earned a 73-65 win over WC in the LL quarterfinals at the same location.

In this one, the Hatters (4-1) put seven unanswered together at the end of the first half to take the lead for good.

The visitors from New Haven went down by as many as sixteen (55-39) early in the final quarter before getting within four in the final two minutes.

Jayden Valderrama (22 points) led all scorers and was key to the late rally by Cross, putting up eleven points in the final period.

Wilbur Cross (2-1) had mangled their first two opponents, 94-43 and 100-58, and came out making shots versus Danbury.  Three straight layups (Jaylen Stafford, Jaykeem Foreman, Malik Alston) give Cross its biggest lead (17-11) of the game. 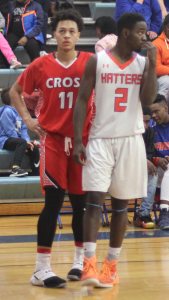 WC still had that six-point lead (29-23) with 3 ½ minutes until halftime.  The Cross shot blanks the rest of the half and had four turnovers while it was the Hatters who got to the basket (an old-fashioned 3-point play by Chris Torres, two layups by Messiah Crandall) and passed WC, 30-29.

The Hatters had the lead but separation took a while.  The margin was only 42-38 with three to go in the third quarter.  After that, only one point for WC while Danbury clicked from long range three times (Jordan Alleyne, Javan Hernandez, Tyler Scalzo) to lead, 51-39, after three.

That lead would increase to 55-39 after jumpers by Denali Burton (16 points) and Cameron Snow before a WC timeout.

The Hatters were still in the comfort zone (61-47) with five minutes remaining in the game.

Just a tad over two minutes later we had ourselves a ballgame!  Cross took everything to the basket while the home team turned the ball over three times and missed the front end of a one-and-one.  Terrance Edwards came off the WC bench to convert a rebound and be on the scoring end of a fast break off a turnover.  Malik Alston, Kwane Taylor, and William Antrum (13 points) contributed layups.  Wilbur Cross was within four (61-57) with just under three minutes left.  This was now anyone’s game.

But Danbury had enough to keep four the closest WC would get.  Free throws helped as the home team made 8-of-11 including the final five in a row. 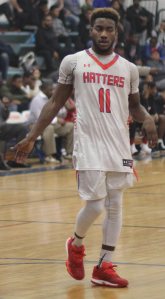 Two huge plays by Jordan Alleyne in the late going.  After a turnover, Jordan protected the 4-point lead by blocking the layup attempt that followed.  Later as part of an inbounds play, Jordan tossed a beautiful¾-court pass that sent teammate Chris Torres in for layup.

Marcus Fox had twenty points in Danbury’s win over Wilbur Cross last March.  This time he sat out the second half with an injury after only two points in the first half.

Why was WC able to come back from sixteen down?  Full-court pressure.  The Governors double-teamed the Danbury guards and if that didn’t work they led the Hatters into pressured layups.  Taking time off the clock would have been better than taking layups while heavily guarded.

The ability of both teams to get to the rim was a surprise because there were plenty of shot blockers on both sides.  The tight man-to-man defenses of both teams opened lanes for those who could dribble around someone.

Good crowd on hand on a rainy afternoon.  Late start after the JV game ended when the varsity game was supposed to start.

Maybe these teams will meet again in March of 2017.

Wilbur Cross box from the game

Danbury box from the game 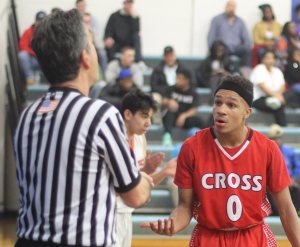 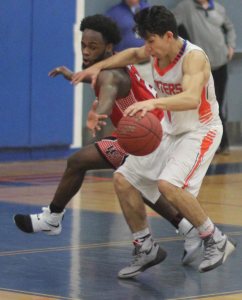