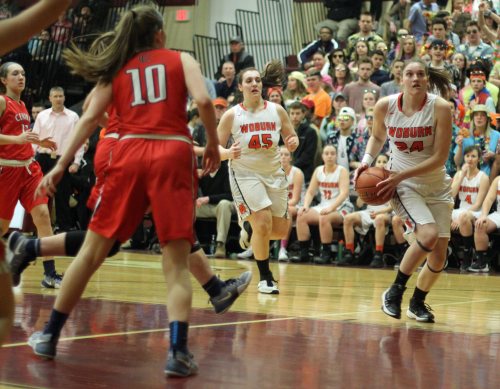 Marissa Gattuso (16 points) sets up a teammate for a layup

This game had the flow of a car needing servicing as both teams pressured the other and whistles blew endlessly stopping play.  There were fifty fouls called and twenty-eight of them went against the Raiders.

The Tanners (20-3) will return to Whittier on Saturday for a chance at a second straight D1 North title.

The combination of missed shots and turnovers (21) prevented the Raiders (16-7) from putting consecutive points together.  Their largest point-run was five.  Nicole Elbeery (10 points) did that run by herself and with it the senior brought CC within a point of the lead, 11-10 early in the second quarter.

#3 Woburn had runs of five points or better six times during the game.

Woburn coach Steve Sullivan (144-31) used plenty of substitutes and those fresh legs kept the team from Lawrence from mounting any late-game heroics.

#7 Central Catholic trailed by eleven (53-42) with 5 ½ minutes remaining but Woburn used the finals minutes to outscore the team from the Merrimack Valley Conference, 12-2, and cruise to the win.  A big shot in that surge was a three by Mya Blazejowski (from Ashlyn Pacheco) from in front of the Tanners’ bench and student section.

A key in this game was the defense Cassie Palmisano played on CC’s top scorer, Nicole Elbeery, limiting the senior’s touches.  Nicole had 22 points in the Raiders’ quarterfinals win over Peabody.

Marissa Gattuso led all scorers in points but her value to Woburn goes far beyond the points.  The Merrimack-bound senior is a magnificent dribbler and passer.  Defensively, Marissa has a knack of jumping passing lanes for steals.  Her all-around abilities make her special.  This is the third time I have seen her play.

One thing I’m sure CC coach Casey Grange would have liked to fix was his team’s defense against Woburn’s inbounds plays that led to three layups.

Plenty of contact throughout the game.  Central Catholic was tough on the boards and five of their baskets came on second-chance opportunities. 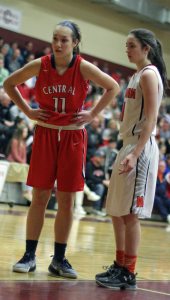 Woburn knocked Central Catholic out of the playoffs last year in the First Round at Woburn High School.  The Tanners went on to the state semifinals before losing to eventual state champs Bishop Feehan.

(All pictures above and below will enlarge considerably.) 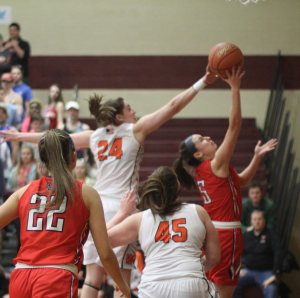 Mya Blazejowski gets a block against the Raiders

Staring down a defender 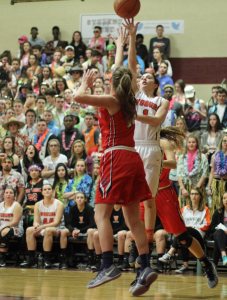 Marissa Gattuso gets off a shot 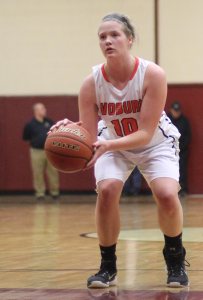 Kelsey Qualey was 7-for-9 from the line 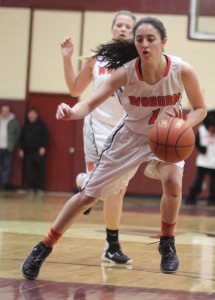 Katie Kirsch goes for a block 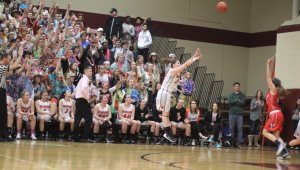 Mya Blazejowski lifts for a triple 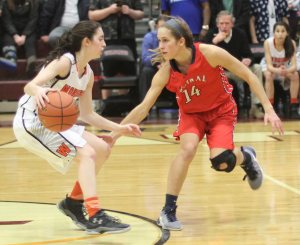