Ipswich pulls away from Amesbury 42-21 with strong second half

Amesbury’s Zack Levarity (2) gets the signal that he has scored at touchdown.

(Amesbury MA) Giving up 30+ points per game won’t win many of them and that logic held true for Amesbury Friday night as they fell, 42-21, to Ipswich at Landry Stadium.

Amesbury (0-5) was in a tie with the Tigers (3-2) in the second period, 14-all, but stayed quiet thereafter offensively until a last-minute tally versus the Ipswich reserves.

Two rushes into the game Ipswich was on the board with sophomore Justin Moran in the Amesbury end zone.  It looked to me as if the same play was used to get Justin to the Amesbury 25 and later in for the score.

Justin Moran (5) off to an early Ipswich touchdown.

The ease of the Ipswich touchdown had me thinking early on that the Amesbury defense was going to be severely tested……….and they were.

I wondered if the Indians could generate enough offense to hang around in a high-scoring matchup.

It turned out that Amesbury could put up points.  The home team answered the first two Tigers’ touchdowns with ones of their own.  Junior Patrick Birmingham figured in both of them.  His 17-yard run in the first quarter put Amesbury on the Ipswich five where Zach Levarity scored from.  In the second quarter, Patrick found daylight on the right and QB Blake Bennett tossed him a 13-yard catch-and-run tally.

Patrick Birmingham hauls in a TD pass from Blake Bennett.

So Amesbury wasn’t going away.  It was a matter of which team would be unable to answer first.

Ipswich responded to the tie score in the 2nd quarter with the second of Pat Gillis’ three TDs.  I am not sure if Pat was even touched on any of his touchdowns.  Good blocking and good deception within the Tigers offensive schemes created some serious openings in the Amesbury defense.

Amesbury didn’t get the score back in the first half but they received the kickoff in the 2nd half.

Something transformed the Ipswich defense in the second half.  The Indians tried a variety of plays in that second half but seemed to be confronted with multiple tacklers much of the time and held to short gains.

The Tigers gained two-TD separation in the third quarter.  A pass from QB Ben Yanakakis to senior Alex Bruhm had Ipswich cooking at the Amesbury five.  Pat Gillis finished in the end zone several plays later.

You’re trailing by fourteen points late in the third quarter so you dust off the passing attack.  Amesbury went that route with absolutely disastrous results.

Trying to get credit straight in sports is an interest of mine.  Christian Fabbri and Alex Bruhm ran back interceptions for touchdowns for Ipswich.  I took enough pictures so that I could see contributors to those pick-six plays.  Pete Spinale was bringing AHS quarterback Blake Bennett down as he tossed the first interception.  On the second one, Ben Yanakakis was in Blake’s face, certainly affecting Blake’s view downfield.

Christian Fabbri has an interception and blocking to get him into the Amesbury end zone.

Needless to say, that revived IHS defense put fourteen straight points up for the visitors and put this game well out of reach.

Captain Connor Whitley among those honored pregame at Landry

Nice crowd at Landry Stadium as the senior athletes and cheerleaders were recognized.

Nice weather too.  I’ll take low 60’s, without a breeze, anytime at night in early October.

On one play in the second half, Ipswich had only ten players on defense and still held the Indians to a small gain.

I was completely fooled by Amesbury when they went for the first of two their extra points.  Why?  They had no holder just #90 (Ruairi Cleary) back there.  I assumed a timeout was coming but instead the ball was snapped to Ruairi and he dropkicked it for the extra point. Didn’t Doug Flutie do that once for the Patriots? 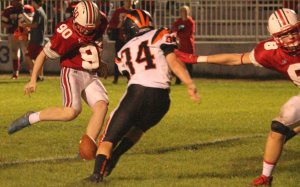 When the attempt for the second Ruairi extra-point attempt occurred I was camera ready and got a shot of the sophomore doing it.

Plenty of helpful information from the public address announcer.

Ipswich had lost its other two road games to Newburyport and Triton. 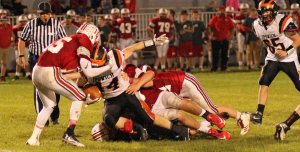 Ben Yanakakis stopped by Amesbury at the goal line. 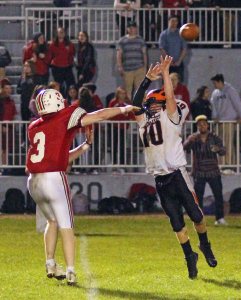 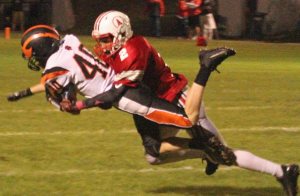 Pete Spinale pressures Amesbury QB Blake Bennett and it leads to an interception.