Amesbury glides by St. Joseph’s Prep 6-0 and into the D4 state semifinals

The Amesbury Indians are the Division 4 North champions

Maddy Creps (2) ripped a goal from the left side in each half.

(Lynn MA) This was not a game to come late to.

Two minutes into it the Amesbury Indians had two on the board against St. Joseph’s Prep on Sunday afternoon.

The final was 6-0 and with the win Amesbury reaches the Division 4 state semifinals.

Amesbury has had few games this season in which they dominated a team the way they did in this one.  “Being in the Cape Ann League has helped prepare us for the tournament,” explained AHS coach Adam Thibodeau.

Chelsea Lynch gets a full swing at a shot from very close.

Newburyport, also from the CAL, reached the D3 state semifinals on this same Sunday at Manning Field.

“Amesbury came out with the horses and we just didn’t match up, “said St. Joseph coach Damian Shiner afterwards.  “We gave them the freedom and opportunity to take the shots they wanted.”

It was a busy and dangerous afternoon for Phoenix netminders Maria DiFelice (first half) and Shannon Daly (second half).  Both girls allowed three goals. 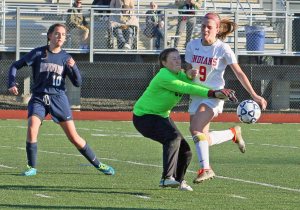 Michaela Halloran and the ball arrive at the same time.

I say dangerous because multiple times those goalies and incoming Amesbury players were on collision courses chasing an incoming ball.

Sophomore Maddy Creps paced the Indians with two goals and an assist.  Both of Maddy’s tallies were similar.  In each she found an opening on the left side and was on target with her left foot.  Both shots in each half ended in the upper right corner above the Phoenix goalie.  “I wasn’t aiming for that spot,” Maddy told me.  “I was just trying to get it on net.”

While the Indians had a feast of opportunities the team from Boston didn’t.  AHS goalie Alli Napoli touched the ball for the first time fifteen minutes into the game.

Credit the Amesbury defense.  Hannaih Burdick, Ashlee Porcaro, Alyssa Pettet, and Madison McGrath were terrific in their half of the field.  There were few panic kicks and plenty of passes to each other to keep St. Joseph’s from threatening.

Anne McElroy and Maddy Creps battle for a loose ball

Despite the mismatch, St. Joe’s and their fans never quit.  “We’re a young team,” said Coach Shiner.  “We’ll be back next year.”

The Indians notched their first goal (Chelsea Lynch from Brooke Taylor) at 38:47. Thirty-three seconds later, Maddy Creps had her first successful blast from the left on a pass from Ashley Pettet.  A timeout by the Phoenix quickly followed.

“I told them to calm down and relax,” said Coach Shiner. “We had plenty of game left but Amesbury is an excellent team.”

The prettiest goal of the game was the third one, Ashley Pettet’s.  The Cape Ann League Player-of-the-Year dribbled past two defenders into the middle of the field and ended up with a straightaway, clean look which she buried.

Nice November weather.  Temps in the upper 40s with sun and little wind.

Anne McElroy and Molly Wheet were tireless on defense for the Phoenix.

Covering games is never easy during the regular season.  Many teams have no scoreboards.  Rosters are seldom available.  In the tournament you expect better.  Well, the scoreboard at Manning Field worked.  The rosters?  Not so much.  I noticed right away that the two St. Joseph goalies had numbers that aren’t on the rosters the MIAA handed out on the way into the game.  I chased down Coach Shiner afterwards to get the names of the two goalies he used.  Then there was the Amesbury roster. I knew that roster because I had done their game with St. Mary’s.  I never looked at it until I was home.  Imagine my surprise when I realized that the Amesbury roster was the 2016 edition! 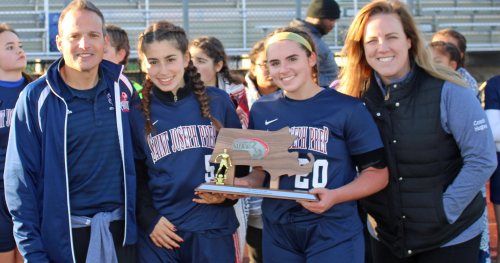 Second half action in front 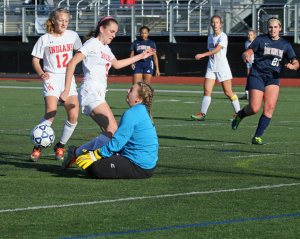 Michaela Halloran on the doorstep in the first half 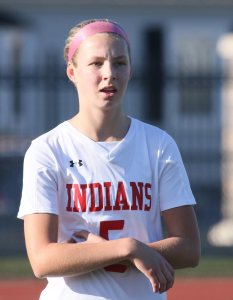