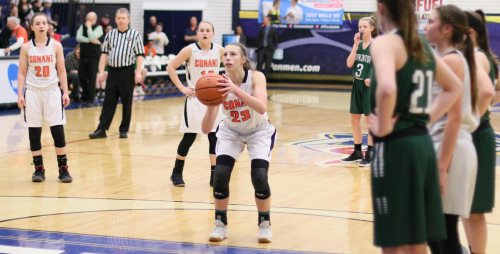 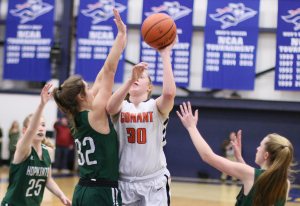 Late-game free throw shooting was huge for the Orioles. It wasn’t that the Hawks missed so many, it was that Conant made so many.

“I’ve been working all year on my foul shots,” explained Liz Gonyea afterwards. “After practice I try to make ten in a row.”

Liz didn’t make ten in a row in this game, but she did drop ten-of-twelve, including three straight, in the final twenty-five seconds to seal it for Conant.

“We knew it would be a close game,” said Hopkinton coach Pat Roye.  “Even though we had beaten them twice during the regular season, they had played well afterwards.”

The Orioles (18-4) finished the season winning eight straight and added to that streak with three more wins in the tournament.

There was little to indicate which team would take the title until the closing minutes.  There were eight lead changes and three ties.

The free throw stats showed (me) where this game was won.  Hopkinton (17-5) made six-of-eight but Conant made fifteen-of-nineteen gaining nine points from the line. 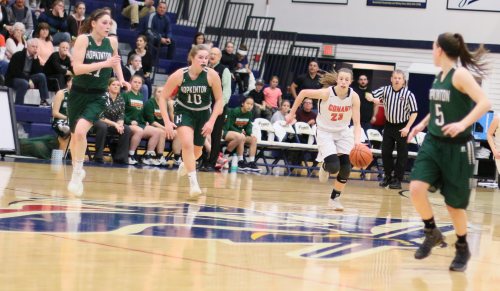 Liz Gonyea (23) in the middle of three Hawks

Hopkinton coach Pat Roye said, “We were hesitant to attack at times.  The stage got to us a little bit.”

No hesitation for Conant.  Mariah Chamberlain (13 points) spun to the basket every time she had possession down low.  Teammate Liz Gonyea took openings to the hoop and sometimes the resulting shots were wild ones but other times she drew free throws.  On this championship afternoon, the freshman made ten-of-twelve free throw attempts.

“Her composure down the stretch was remarkable,” said Coach Troy about Liz’s free throw heroics.

I asked Coach Troy about what adjustments he made before facing the Hawks for the third time: “We packed in the middle a little bit and we got out on their shooters better than we did last time.”

Senior Taylor Banish told me, “We wanted them to be one-and-done so that we would get more opportunities to score.”

The Orioles played a zone defense while Hopkinton played a man-to-man most of the way.

Liz Gonyea ended up with a double/double (12 points and 11 rebounds).  She also had four steals. 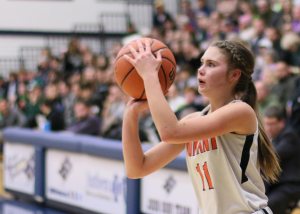 Camri Aho (9 points) lines up an outside shot

Junior Camri Aho had 9 points getting seven of them, including Conant’s only 3-pointer, in the second half.

The story of Liz being from Alaska is well known.  “We moved here the end of August,” she explained. “We have tons of family down here.”

I appreciated the stat pages provided by SNHU.

Box from the game.

(All of the pictures will enlarge if you click on them.) 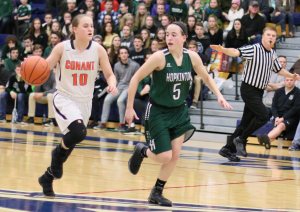 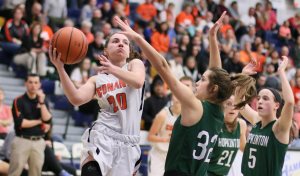