“This is my seventh year covering minor league baseball and I think I already know that this is as good as it gets,” explained Tyler Murray.

Tyler is the Broadcast/Media Relations Manager of the New Hampshire Fisher Cats.

I chatted with him on Thursday morning prior to the morning game the Fisher Cats had with the Portland Sea Dogs.

Tyler broadcasts the FC games home and away and has seen Vladi Guerrero Jr (19), Bo Bichette (20), and Cavan Biggio (23) in action for nearly fifty games.

I became interested in seeing some Fisher Cats games when I saw in late March that the team in Manchester, New Hampshire would have the #3 (Vladi) and the #8 (Bo) prospects in all minor league baseball on their AA roster.

I also read a New York Times article that added Cavan Biggio to my list of must-see players in New Hampshire.

All three of the players have former major leaguers as fathers.  “With all the media attention they get,” said Tyler, “and with all the requests they get, they handle it like they were big leaguers.  My guess is that their parents have a lot to do with it.  They raised them right.”

I have been to Manchester (NH) four times, thinking prior to each of the last two visits, that at least Vladi and maybe Bo as well, would be off to AAA Buffalo before I got there.

Tyler explained why he thought Vladi was still in New Hampshire: “Because Vladi is nineteen, the Blue Jays are being smart not to rush him.  He could be here for a bit longer.”

I asked Tyler what the three prospects are like on a day-to-day basis:

“Vladi is a great teammate.  He’s a fun-loving guy.  He likes to have a good time at the ballpark.  He’s had a lot of fun at the ballpark hitting over .400.” 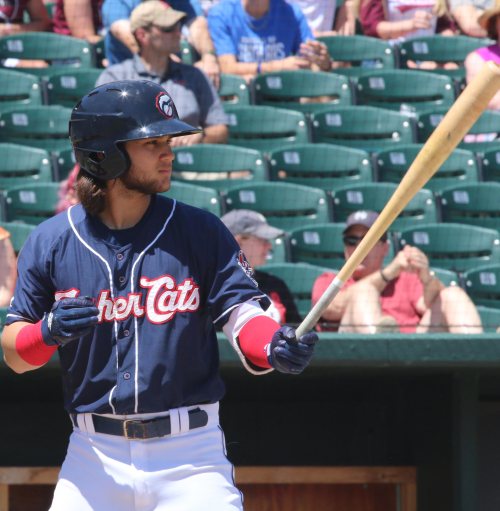 “Bo is a pretty intense hard-worker.  He’s critical of himself.  He was the batting champion in the minor leagues last year.  He has been making some really good adjustments as this season has gone along.”  Bo had a home run leading off for the Fisher Cats on Thursday. 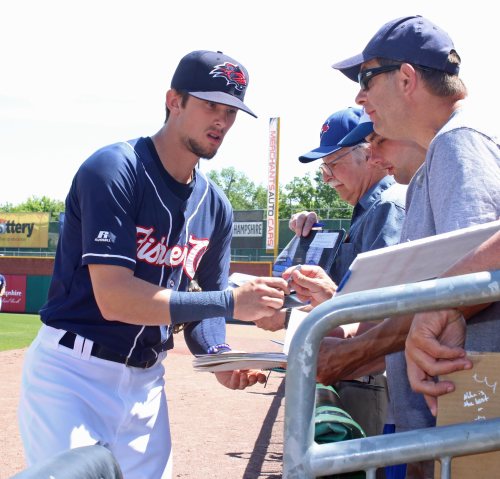 “Cavan is an impressive young man.  He has a good attitude.  He’s always willing to sign an autograph and meet with the media.”

My chance to talk to an insider (Tyler) gave me the opportunity to get him to react to my thoughts/questions on each of the players.

I know Vladi has impressive power but to succeed at the next two levels requires selectivity.  Last year Vladi had more walks than strikeouts.  This year the numbers are again close.  Tyler’s response: “Vlad is so smart.  He watches tape.  He studies pitchers.  He seems to really enjoy the mental side of facing a pitcher. Manager John Schneider often talks about Vlad having ‘a good idea at the plate.’  He doesn’t go to the plate just with raw talent and raw power.”

Bo celebrates a homer with his teammates

Regarding Bo, I noticed that his batting average was down from last year.  However, I also noticed that he now has 15 stolen bases, second on the team.  You have a young prospect with power and the ability to steal bases.  Sounds like Mookie Betts to me.  “Bo has always been quick.  He’s been batting leadoff lately and taking advantage of opportunities.  Adding base stealing to his abilities certainly won’t hurt his chances to get to the next levels.”

Cavan wasn’t even listed as one of the Top Thirty prospects in the Toronto minor leagues, but after watching him play in four games I wondered if I was missing something.  He is batting over .300 and near the top of the Eastern League in home runs.  He’s a natural second baseman as his Hall-of-Fame dad Craig was.  “Cavan tweaked his swing a bit in the off season.  He lowered his hands.  Hitting coach Hunter Mense tells us that Cavan has the most efficient swing on the team.  By that he means that Cavan is able to move all parts of his body at the same time when he swings.  We have a short porch in right field but his homers have gone way over the fence.  It’s been a great first half for him.  His dad has been in town all week and that has been good.  Can he keep it up in the second half?  It has been hard for him to do that in his previous two pro years.  His age and his three years in college (Notre Dame) may have kept him off the prospect list.  He now is listed as 30th since another prospect was recently designated for assignment.”  By the way, Cavan, like Bo, had a home run on Thursday.

Vladi and Cavan in the Fisher Cats dugout

The attendance at Northeast Delta Dental Stadium is up 25% and the hotel behind the ballpark is busier than usual.  The autograph seekers are figuring out where the prospects will be and staking locations out.  That’s what happens when you have what Tyler Murry calls, “The best roster we’ve ever had.”

Thanks to Tyler for his time and information.