Hayley Catania ended the first and fifth with consecutive strikeouts

(Lowell MA) Neither team expected to even be in this game!

St. Mary’s was young while Amesbury was seriously reconstructed.

On this afternoon, it was the reconstructed team that put enough pieces together to win the Division 3 North softball semifinals 4-2 at Martin Field in Lowell.

The top piece for Amesbury (15-8) was senior Hayley Catania.  The AHS pitcher allowed five hits (three of them in the first inning) and struck out ten Spartans.  But there’s more to the story: Hayley also had two hits and an RBI.  Her alert baserunning keyed one of the Indians runs in the 2-run fifth. 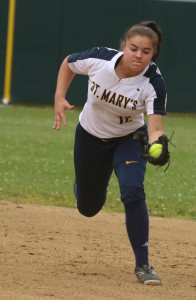 Both teams had powered past quarter-final opponents.  St. Mary’s had four homers versus Pope John while Amesbury had three long ones against Lynnfield.

Today’s contest had only two loud hits and both of them were by Amesbury.  Emma DiPietro had a triple in the 2-run fifth and Hayley had an RBI double in the Indians 2-run seventh.

St. Mary’s (14-9) scratched out a run in the first.  Consecutive singles (Felicia D’Alessandro, Marina DiBiasio, Jordan Sullivan) produced a run.  This was where Amesbury’s Hayley Catania gave us a glimpse of the kind of game she would have as she then struck out Jennie Iudice and Taylor Sullivan to end the inning.

Amesbury had runners in scoring position in each of the first three innings, but pitcher Lily Newhall kept the ball in the infield and escaped being scored on.

Starting with the 2 K’s in the first inning, Hayley retired eleven in a row including six strikeouts.

While the pitching was terrific for Amesbury they still trailed by a run until the fifth inning.

Emma Catania singled home a run in the 5th but was thrown out stretching it.

Junior Emma DiPietro tripled with one out over CF Christina Nowicki’s head.  Hayley Catania walked but on ball four the ball got away from catcher Jordan Sullivan allowing Emma to score and tie the game.  Hayley alertly took second when the Spartans concentrated too much on Emma crossing the plate.  That alertness paid off for AHS because when her sophomore sister Emma singled to center, Hayley came home with the go-ahead run.

Now down, 2-1, the pressure was on the St. Mary’s offense.  Alyssa Grossi singled to center opening the bottom of the 5th.  A sacrifice bunt (Katie O’Neill) moved her to second with one out.  But here came Hayley Catania, doing exactly as she had done in the first inning, striking out the next two batters (Angelina Catino and Christina Nowicki) to hold the slim lead.

Both teams went down in order in the sixth.

The seventh was not for the weak of heart on either team!

Amesbury put two runners on with no one out on a walk (Emily O’Donnell) and Julia Campbell reaching on an error by pitcher Christina Nowicki.  Freshman Maddie DiPietro pinch ran for Emily.  That brought up Hayley and St. Mary’s coach Paige Licata had a meeting at the mound.

“We talked about walking her (Hayley),” said Coach Licata.  “I told Christina (Nowicki) to keep the ball away from her, and she did, but the ball was still pulled to left.  With a hitter like that you take your lumps and hope you can produce more runs.”

Maddie DiPietro (8) and Julia Campbell (10) wait on the bases to see if Hayley Catania’s long fly will be caught….it wasn’t.

The Indians would need those extra runs in St. Mary’s final at-bats.  Things started harmlessly enough (for Amesbury) as two Spartans struck out.  Then Hayley walked Alyssa Grossi and Katie O’Neill followed with a 2-strike single to right.

Was a miracle comeback about to happen?

The Spartans created a rundown between first and second and Alyssa Grossi scored as Katie O’Neill got back to first safely.  Now the tying run was at the plate.

But Hayley got Angelina Catino to fly out to RF Karleigh Walker insuring Amesbury a trip to Saturday’s North final against Austin Prep.

The Indians reaching the D3 North surprised their coach (Jacqui Waters) as much as anyone: “I have only two players playing where they played last year.  This is all ecstasy to me.  I never thought we’d be here.”

Coach Paige Licata was surprised that her team made it as well:  “We started 0-3 with a team with no seniors and two juniors.  Today we used a 7th grader (Angelina Catino) at first and an 8th grader (Lily Newhall) pitching.  There was no one crying afterwards because everyone will be back.”

Hayley Catania: “To beat St. Mary’s was a first for me.  My best pitch today (like against Lynnfield) was my drop curve.”

St. Mary’s had only three outfield outs, all to RF Karleigh Walker.

Coach Waters: “Our two seniors (Hannaih Burdick & Hayley Catania) have held this team together.  Often graduated seniors aren’t like that but our two have stayed attentive.  We practice three hours a day, six days a week on the basics and go at it as hard as we can.  We’ve gotten better and better as the season has progressed.  I learned that approach from previous coach Chris Perry and it has paid off.”

Weather looked as if it could rain at any time.

RF Karleigh Walker successfully handled three fly balls including the one that ended the game.

Funny moment: I asked Coach Licata about Hayley’s pitching and she said that she’d coached against her two years ago.  She then asked me laughing, “She’s a senior, I hope, isn’t she?”

No one I talked to afterwards knew when the last time was that Amesbury softball had beaten St. Mary’s.  Coach Waters guessed that it might have been 2005.  It had obviously been a while!

I did see Amesbury soccer defeat St. Mary’s in the tournament this season at Landry Stadium. 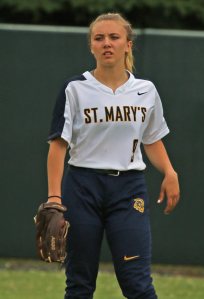 Waiting for the game to start 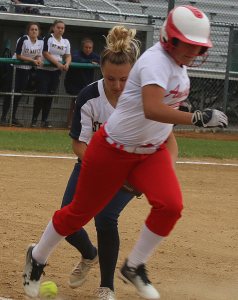 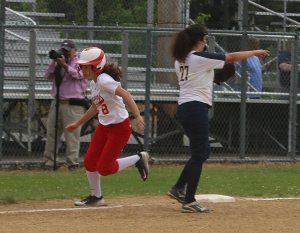 Maddie DiPietro turns 3B and heads home in the 7th inning

Hayley Catania after the win 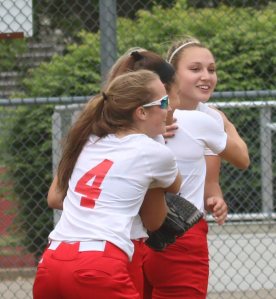 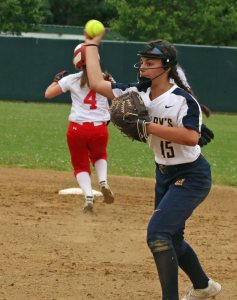 2B Felicia D’Alessandro tosses to first 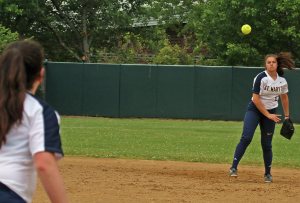