“Into the Woods” I went at Lake Region High School 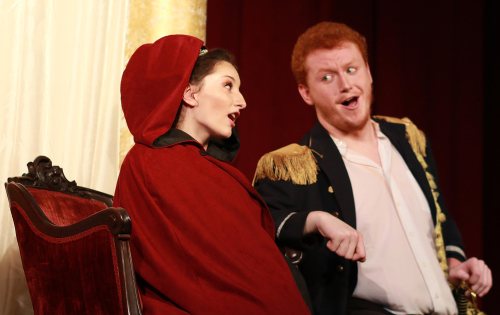 Cinderella and her prince sing

Little Red Ridinghood and the wolf

(Naples ME) My wife and I were in the audience for “Into the Woods” performed by the Lake Region Community Theatre at Lake Region High School on opening night (August 3rd).

If you’re looking for some sort of theatre-critic entry you’re in the wrong site!  I will share some non-expert observations, however.

From the get-go I knew that I was in the right place because, and others coming from Bridgton will confirm this, there was a lovely rainbow in full bloom right over Lake Region High School when I arrived for the show!

The story “Into the Woods” was written by James Lapine with a future musical production in mind.  James had worked with musical/lyricist Stephen Sondheim in 1982 on a similar production. The talented two-some were back together in 1987 putting “Into the Woods” together.

The show was transformed into a Disney film in 2014 and was very successful.  In 1988, the stage production has similar successes even though it was up against “Les Miserables,” when it was time to give out awards.

I think what I liked best about the show in Naples was the cleverness of the story.  The writer took familiar fairy tales including, Little Red Ridinghood, Jack and the Beanstalk, Rapunzel, Cinderella and interacted them.  What a concept!  For example, you had Little Red Ridinghood in the company of Cinderella.  Just a fascinating idea to me.

So, I went in totally unfamiliar with how the show would go but familiar from a much earlier life with the characters.  It was almost like going to a class reunion and finding out what folks have done since graduation!

The Naples show featured performers of all ages and most of them live nearby.  Quite a few Lake Region High School were involved.  The program provided some interesting bio information on the actor/actresses.

As I watched the show, I could easily see that a tremendous amount of practice and coordination was needed to make the show work as smoothly as it did.  The last number of the night, as an example, had everyone on stage with singing and footwork involved and it came off, as far as I could tell, very smoothly. 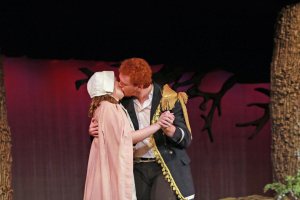 The makeup of the show, intertwining fairy tale characters, required plenty of interaction from multiple performers.  One person out of synch could have been disastrous but I never saw anything like that happen.  These folks had put in the time to make things work, and they did work.

I thought that the lighting was very good.  When an amateur photographer (yours truly) can get focused pictures, the lighting must be good, believe me.

Sound system?  I’ve had my ears for a while.  Little difficult at times to catch the words.

The orchestra was perfect, and the costuming fit the story nicely.

Air conditioning?  You can’t have everything!  There were fans in the corridor to cool us off during intermission.

I would recommend taking in this show.  There are five more chances to see it, counting tonight.  The price is right, and the seats are comfortable.  You’ll enjoy it…….I did. 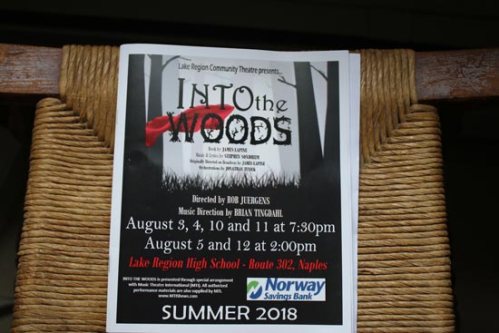 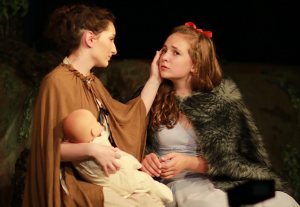 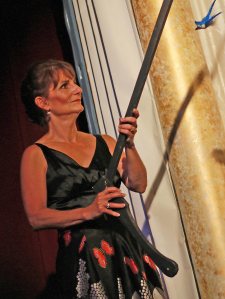 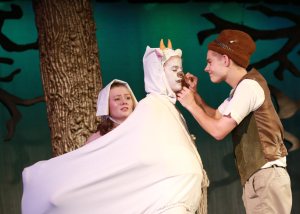 The baker and his wife 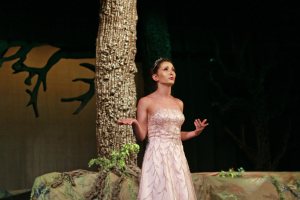 Hearing from The Giant 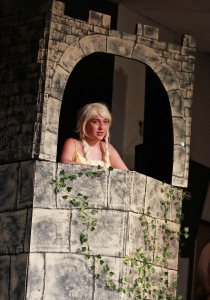 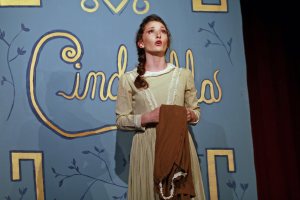