Freeport wears down Lake Region 9-0 in Class B soccer

(Naples ME) “Freeport is a great team,” said Lake Region coach Ryan Harlow after watching his team defeated 9-0 by the Falcons on Saturday morning.

Who could argue?  The visitors put on a passing clinic on all parts of the field.

Many of the Falcons’ goals were at the end of unselfish setups.  Eight different players scored.

“It’s their touches,” added Coach Harlow.  “As soon as they touch the ball they know where they’re going.  They are two players ahead on where the ball is going to go.”

Credit the Lakers for hanging in.  Coming off a 2-12 2017 season and a tough 2-1 loss Thursday to Poland, the home team trailed just 2-0 after thirty minutes of the first half.  Unfortunately for the Lakers (1-2), in those final ten minutes Freeport cashed four times.

With a six-goal cushion the Falcons (2-1) could play the second half differently.

“We wanted to give everyone minutes,” explained FHS coach Bob Strong.  “I was able to put players in different positions to see how they’d do.  Some who were usually in the back got to play in the front.”

No matter where the Falcons were positioned their passing was terrific.  “We moved the ball around well,” added Coach Strong.  “We want to limit our touches and play quick.”

Junior Will Winter paced the Falcons with two goals and two assists.

The busiest person in Naples from 10AM-11:30AM?  Easily it was Lakers goalie CJ Ferguson.  The LR goalie faced 33 shots and few were slow rollers.

The Falcons did score one PK but, with their passing in the box, several times teammates were set up for PK-type scoring chances.

Defender Caleb Arsenault had an assist for Freeport.  “We played well in the back,” he told me afterwards.  “We got the ball to midfield and the offense connected on passes.”  Caleb is looking to attend Unity next year.  “I would try to walk on to their soccer team.”

Coach Harlow: “Our defense is young.  We’re trying to build it.  Our sophomore class is very good.  We hope to compete with teams like Freeport in the future.  We just had a youth clinic earlier this morning for 150 kids so there is an interest in soccer.”

Coach Strong: “We have some horses this year, but we have to execute.  We play Yarmouth (defending Class B champs) on Tuesday.  That will be a test for us.  No one expects us to win (FHS was 9-7 last year) and that’s the position we like to be in right now.”

The scoreboard on the lower field showed the time but not the score.

Covering program-less games is always a challenge.  To accurately identify pictures, you must have names and numbers.  Today I got some help but as I looked through my pictures I found numbers from both teams that aren’t on the lists I left with.  How helpful it would be if each coach brought several up-to-date rosters with numbers, names, and graduating class to each game.

(All the pictures above and below should enlarge if you click on them.) 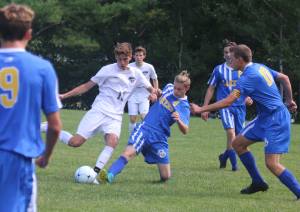 Jake Dumond lines up a shot 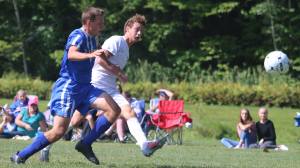 Will Winter (2 goals) break through 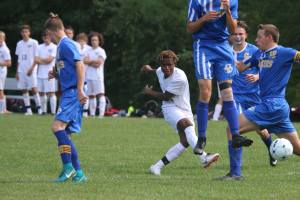