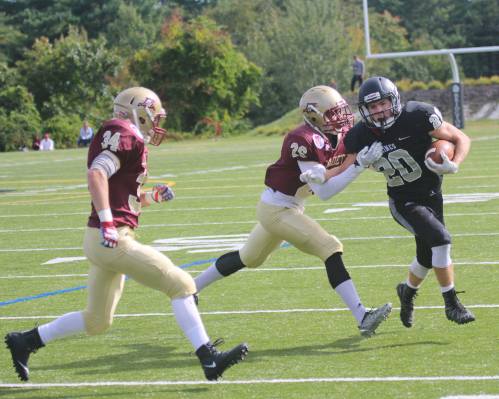 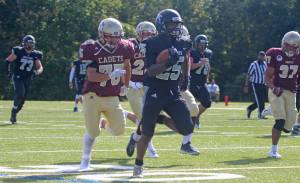 (Bridgton ME) You can’t teach speed.

Bridgton Academy had plenty of it and sped by the Norwich JV’s on Sunday afternoon, 52-6.

Long gainers were the order of the day for the 2-1-1 Wolverines delighting a large Homecoming gathering.

BA coach Rick Marcella tried to downplay the win a bit afterwards.  “They’re a JV program.  They don’t get all the reps together we do in practice, so we should have an advantage.  Sometimes a team can rise above that but not today.” 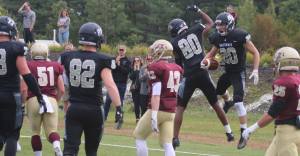 Plenty of celebrations for the Wolverines

That bad Norwich field position turned into a safety after a bad snap on a punt attempt from the end zone in the first quarter. 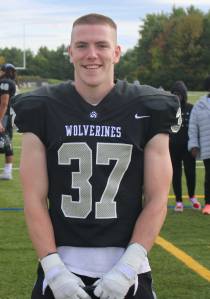 The safety began a steady flow of points for the home team the rest of the game.  The Wolverines tallied two TDs in each of the first three quarters and won with ease.

Defensive back Wigs Crowley had two interceptions for Bridgton.  “We were in Cover 3 and I was just in the right place at the right time,” said the DB from Milton (MA).  “Our linebackers played good underneath, so the quarterback had to lob the ball over them.  I was just sitting there waiting.”

It wasn’t a perfect afternoon, however, for the BA defender.  “They scored their touchdown on me.  I bit on a screen pass and then couldn’t chase the receiver down.”

“He a very solid college prospect,” said Coach Marcella of Crowley. “I think he has four interceptions this season.”

There were plenty of big plays.  “One of the top ones was by George Morrice (29 yards) early in the second quarter on a first-down play,” said Coach Marcella.  “He made some nice cuts on that touchdown run.” 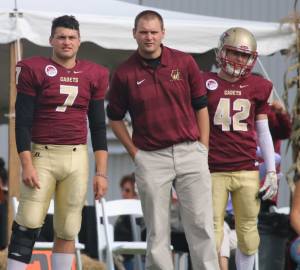 Preston Buchanan caught a TD pass in the 3rd quarter and Elijah Nichols zigged and zagged his way to the end zone in the final quarter.

The Cadets lone score was in the third quarter when QB Jeff Baldassari connected with Levi Gosselin.  Both players are from Nashua (NH) North.

“We’ll enjoy tonight and then be back to work tomorrow,” said Coach Marcella.  “Our next opponent is Navy Prep.  Most of their players will play for Navy next year.  It will be completely different from today.”

BA plays nine of its ten games on the road.  Why?  It’s hard to get teams to travel to Bridgton.  Most of the varsity teams have games on Saturday which makes travel complicated.

Plenty of get togethers after the game.

Covering games is not always easy.  Norwich added to the “excitement” by having players wearing the same numbers.  Try identifying pictures when that happens! 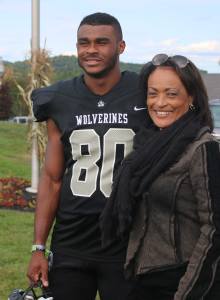 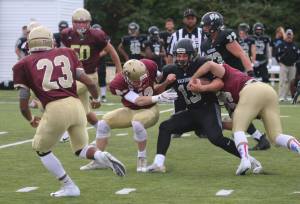 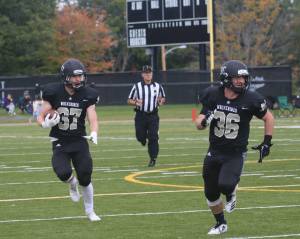 Wigs Crowley runs back an interception with Adam Briffett looking to block. 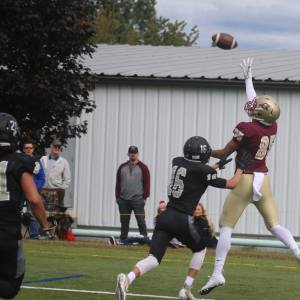 Xzabier Weaver reaches for a pass over Connor Foley 16

Ball on the field 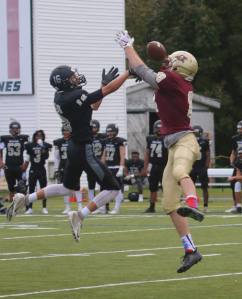 battle in the air 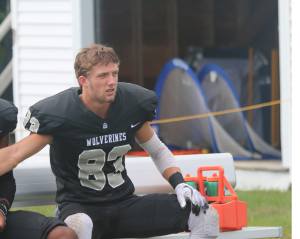 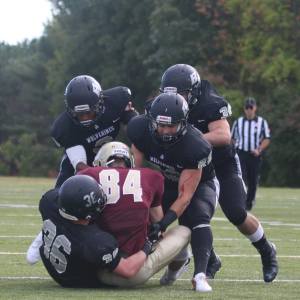 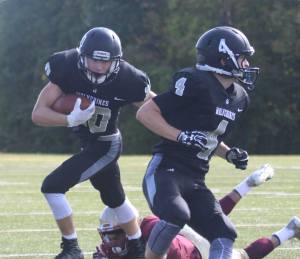 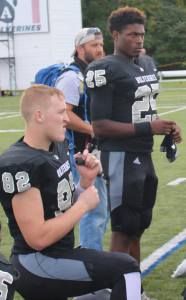 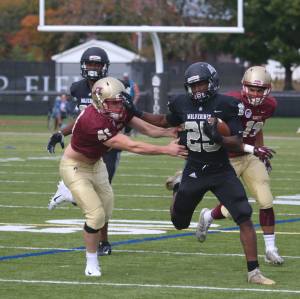 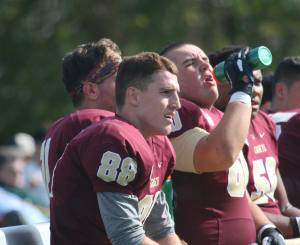 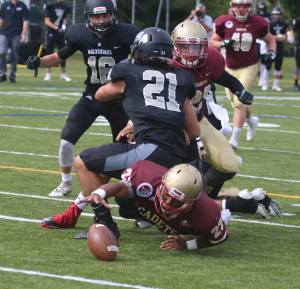 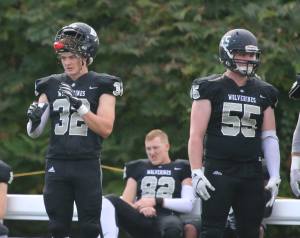