(West Newbury MA) The names change but the approach to defense doesn’t.

Both teams had started the season with two wins over Cape Ann League competition.

“Pentucket is ahead of us,” said NR coach Bob Melillo afterwards.  “Their intensity level is better, and they are very good at running plays.”

On this night, the Sachems turned up layups on inbounds plays, backdoor cuts, and a full-court pass (Angelica Hurley) that led to a layup (Angelina Yacubacci) against full-court pressure.

After the first quarter (13-2) the Sachems joined the Hornets in struggling to score.  That lasted into the final quarter.  NR was within nine (31-22) as the 4th period began.

In that final quarter the Pentucket defense, which had been very good, was joined by a good-things barrage down the offensive end.  The points started flowing from in close (seven layups) and the lead reached twenty (50-30) 5 ½ minutes into the last quarter.

Arielle Cleveland led all scorers with sixteen points, including fourteen in the second half.  “Arielle is a very good basketball player,” said Coach John McNamara.  “She dominated the last portion of the game underneath at both ends.  She is only a sophomore and going to get even better.”

Coach Melillo was disappointed with the way his team played.  “I thought that we would be much better than we were today,” he said.  “There were too many easy baskets and second-shot baskets.”

“North Reading is a very good team,” said Coach McNamara.  “I thought that they might be the best team in the CAL.”  Not on this night.  The Hornets never got comfortable against the hounding man-to-man coverage they faced.  Much of their movement on offense was east-to-west rather than toward the basket.

The North Reading defense was solid in the middle periods.  Sophomore Julia Howse had at least four blocks by my count.  She also made several terrific cross-court passes.  I won’t get into her skills as a shortstop on the NR softball team!

Angelina Hurley and Angelica Yacubacci each had fourteen points for Pentucket.

“We work a lot on in bounds plays,” said Coach McNamara.  “If you can get a couple of them to work in a game it’s big.”

Coach Melillo was optimistic about the future.  “We’ll get better.  I think that now the girls understand how hard they have to play for 32 minutes to compete with a team like Pentucket.”

Jess Galvin (12) looks for an opening

The Hornets were able to limit the Sachems to only three 3’s.  However, by closely defending the perimeter they opened up driving opportunities for Angelina, Angelica, and Jess Galvin.

I asked Coach McNamara about the after-effects of the overtime loss to Foxboro in the D2 state semifinals.  “The kids have gotten over the Foxboro loss.  As I coach, I don’t think I will ever get over it.”

Coach McNamara is in his 13th season with Pentucket and currently has a remarkable 260-44 won/loss record during that time.

Good crowd in house on a warm (for December) night outside. 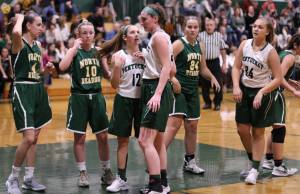 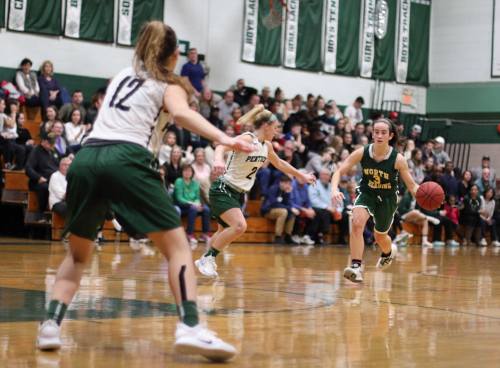 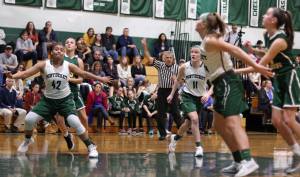 Casey McAuliffe at the line

Scramble on the floor