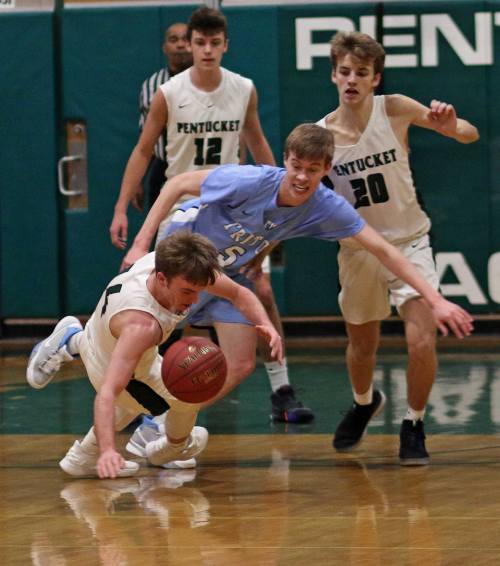 (West Newbury MA) The wait for the first loss continues.

Pentucket (9-0) had a big first half and continued with their winning ways defeating Triton, 60-45, on Friday night in Cape Ann League action.

The Sachems are one of only two Division 3 North teams to still carry an unblemished record.  The other is St. Mary’s (Lynn).

“We’ve had good team play at both ends of the court,” was how Pentucket coach Ed Hickey explained the Sachems terrific start.

I saw what he was talking about tonight against the Vikings.  The Sachems played an active zone that gave Triton few open looks, especially in close.  On the other end, against the Triton zone, Pentucket was patient and willing to pass the ball until a good shot showed up.  Call them unselfish.

Junior Jake Etter led Pentucket with seventeen points, collecting thirteen of them in the breakaway first half.

Senior Spencer Pacy had 16 points including four straight free throws in the 4th quarter when Triton had cut their deficit inside of double digits.

“Tonight’s game wasn’t as pretty as we wanted it to be,” said senior Gus Flaherty afterwards, “because Triton is a good team.”

The Sachems have been winning by large margins so far this season.  “We needed a competitive game because we will be in those kinds of games in the future,” explained Gus.

The Vikings (5-5) were looking at a 50-30 deficit 1 ½ minutes into the final quarter.  But then, sparked by junior Michael Farago, the visitors put good defense and point-producing offense together and made things interesting.

The result was a 12-1 run tightening things to 51-42 with 3 ½ minutes left.  Pentucket coach Ed Hickey saw where things were headed and called a timeout.

Out of that timeout it was the home team’s turn to shine at both ends of the court.  In the next minute the Sachems regained control of the direction of the game and pushed on to their 9th win.

Mason Ferrick tallied ten points for the Vikings getting all of them in the second half. 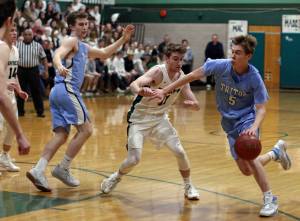 The Sachems broke a 9-6 game open with a 14-2 segment that stretched into the second quarter.  Jake Etter had a big part in the breakaway notching eight points.  He had a triple and added three straight free throws when he was fouled on an attempted three.

Triton trailed by sixteen (32-16) at the half.  The deficit climbed to twenty (50-30) in the final quarter before they cut the lead to nine.

“We had the opportunity to put them (Triton) away,” said Coach Hickey, “but they didn’t give up.”

Triton struggled to make shots most of the night, but their defense turned up scoring chances in the last period.

Jack Tummino converts a steal in the second half

Triton actually “won” the second half (29-28) but their sixteen-point halftime deficit was too much to overcome.

Coach Hickey: “I have not seen (undefeated) St. Mary’s play but I’ve heard a lot of good things about them.”

The Sachems will face two Division 3 Cape Ann League teams with only one loss over the next ten days; Hamilton-Wenham and Newburyport.  “Both teams have been strong over the last couple of years,” said Coach Hickey.

“Playing Newburyport will be fun,” said Gus.  “I am really excited about that one.”

Pentucket was 16-7 last season.  They reached the state semifinals at the end of the 2014-15 season.

There will be a rematch between Triton and Pentucket at Triton on February 1st. 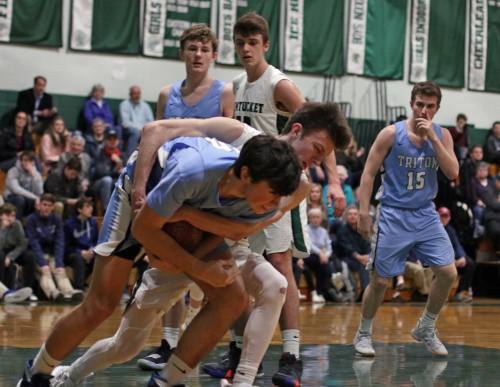 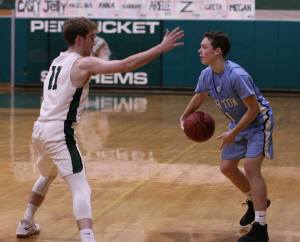 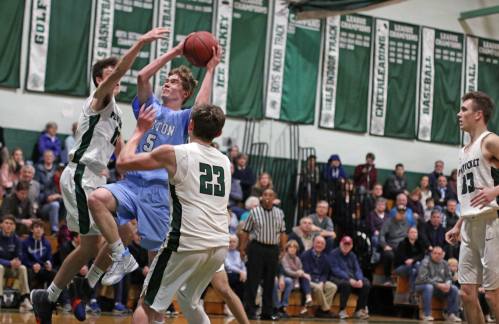 Max McKenzie down the lane