Morgan Bovardi (17 points) on the move 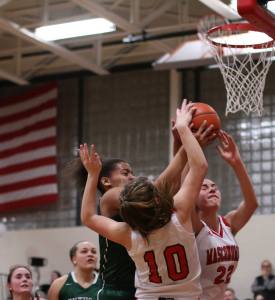 (Boxford MA) Masco coach Bob Romeo told his team afterwards, “if you play the way you did tonight you can play with anyone in Division 1 North.”

Hard to disagree after seeing his D1 Chieftains dominate Pentucket in the second half and take a 56-43 win on Friday night.

The Sachems (17-3) have the best record in Division 2 North.

“We knew what this team (Pentucket) was capable of doing,” said Mak Graves (19 points) after the game.  “We practiced hard to be ready for them.”

In the first meeting, Masconomet took a 17-11 lead into the second half and then stumbled through a 10-point second half. 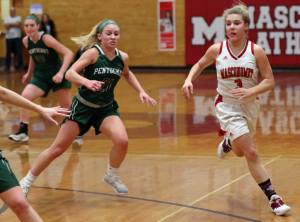 Mak Graves (19 points) gets away from Maddie Doyle

This time around Pentucket had a 21-18 lead at halftime and it was the Chieftains pleasing the home crowd with a 38-point second half.

With the scored tied, 26-26, three minutes into the second half, Mak Graves took over.  The flashy junior put a jump shot, a three (from Cally McSweeney), and two free throws together.  Pentucket had just a free throw (Angelica Hurley) during this three-minute segment.  Masco had separation, 33-27.

The game was far from over.  Early in the 4th quarter two free throws and a Jess Galvin three (from Maddie Doyle) had the Sachems down four, 39-35.

Later, a layup by Angelica Hurley (15 points), a free throw (Anna Wyner), and a three by Angelina Yacubacci (16 points) and Pentucket was within one possession, 44-41, with 3:50 remaining.

On this evening, Pentucket couldn’t stay close down the stretch.

“We were outplayed in the second half,” explained Pentucket coach John McNamara.  “We just didn’t have the legs to shoot the ball and defend at the end.”

After an Olivia Filmore jump shot on an inbounds play started the final 3:50, the Chieftains paraded to the foul line twelve times.  They made ten!  “We made our free throws when we had to,” said Coach Romeo.

The Sachems had just two made free throws (in four tries) during the final 3:50.

That 14-2 finish for Masco was enough to give Pentucket a rare loss.

“Hats off to Masco,” said Coach McNamara.  “They are aggressive on this court and a tough team to beat.” 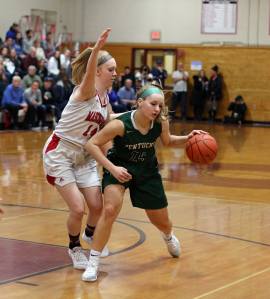 Morgan Bovardi had seventeen points for Masconomet.  In the first meeting, Morgan was in foul trouble early and had a 3-point night.

Having both Mak Graves and Morgan on the court most of the night enabled the Chieftains to handle Pentucket’s non-stop pressure.

“You have to make plays against Pentucket because they play such great team defense,” said Coach Romeo.  “They won’t give you anything easy.”

You had to think that it might be Masco’s night when in their first-half struggle to score points they were able to bank in two 3-pointers.

“We got some breaks early when those bank-three’s went in but it was a good sign,” Coach Romeo said.  “It loosened everyone up.”

Take those two shots away and Masco is down by nine at the half instead of three.

Both teams had surprising losses recently against teams they had defeated soundly in first meetings.  For Pentucket it was Notre Dame (Hingham) and for Masco it was North Reading.

But that’s why we show up to games; you never know what will happen.

The Chieftains honored their two seniors (Sara Fogarty and Marissa DeLucia) before the game.

Anna Wyner in for two 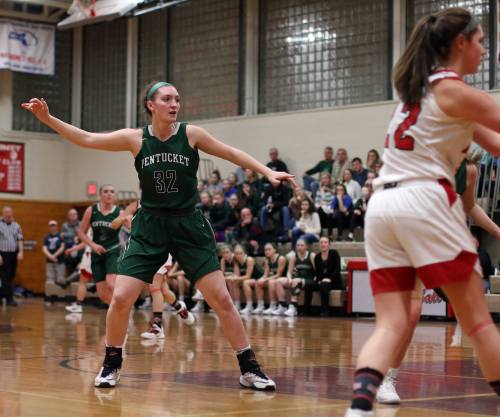 Morgan Bovardi (17 points) floats one up 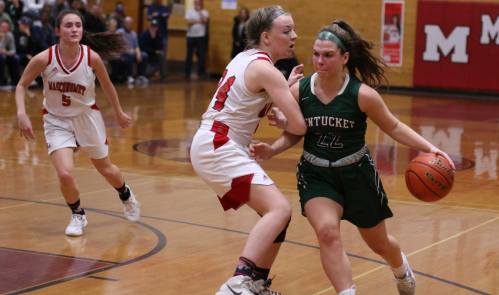