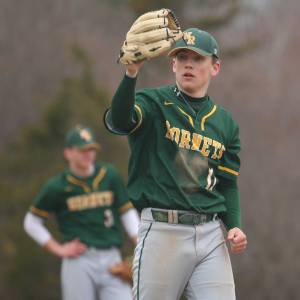 (Byfield MA) North Reading got their first win this afternoon.

Triton will have to wait another day.

The final was 11-5 on a cold, uncomfortable Thursday afternoon of Cape Ann League baseball.

“It’s tough to go down five early and then try to dig yourself out of a hole,” said Triton coach Ryan McCarthy afterwards.  “The timely hitting hasn’t been there in our first three games.”

North Reading went up 7-0 after three innings and all of those runs came after two outs.  That’s timely hitting!

Ball in the air over second base

Senior Cole Doke led the way for NR on the hill and at the bat.  He limited Triton to four hits and three runs.  He was even better batting getting two hits, three RBI, and scoring a run.

Cole was quick to deflect the credit to others afterwards: “It was a great team win.  We got the bats going and they fielded well behind me.”

The only player in the NR starting lineup without a hit was Ryan Connor.  He did, however, nicely execute a safety squeeze to bring home the last North Reading run in the 6th inning.

The Vikings ended with eight hits putting four of them together in the final frame to get two runs.

Triton twice ended innings (first & fifth) getting caught off base.  In the first, pitcher Cole Doke fielded a slow roller down the third baseline, faked a throw to first and then turned to pick Devin Parsons off third.  In the fifth, Cole threw quickly to first catching Kyle Odoy away from that bag.

You sensed in the first inning that Triton might be in for a long afternoon because right after Devin was picked off third, Jared Berardino singled. The Vikings didn’t get a run in that opening inning.

The North Reading second was even more difficult for Triton.  The Hornets had the bases loaded with two outs.  Joey Frammartino hit a flair into short left that 3B Mark Glickman dropped after hustling to make the catch…..two runs scored.  Later pitcher Devin Parsons was late covering first leading to a third NR run.  Then another potential inning-ending grounder got by 2B Cam Gilroy allowing two more Hornets to cross.

“The mistakes in the second inning were contagious,” said Coach McCarthy.  “You can’t let that stuff happen.”

But it did happen putting the home team down five.

NR got RBI singles from Matt Vittozzi and Jimmy Currier in the third inning to stretch their advantage to 7-0.

Tyler Godfrey had two hits, and RBI, and scored a run

The Vikings put three runs up in the third.  Two walks, two wild pitches, and a single (Tyler Godfrey) and a fielder’s choice (Cam Gilroy) produced the scores.

Two terrific plays by 3B Jack Keller limited the damage Triton might have done in the third inning.

Despite the eventual loss, Triton finished strong tallying twice in their final inning off NR reliever Ryan Veneziano.  The Vikings had half of their hits (Andrew Maiuri, Jack Tummino, Tyler Godfrey, and Jared Berardino) in that productive inning.

“I thought that our kids played well,” said NR coach Eric Archambault.  “We were very disappointed to start the season 0-2.  There were some things we needed to improve on, and we did.  We have the potential.  When we put it together we are a really good team.”

Cole Doke: “It was my first start of the season.  I battled injuries most of last year.  My curve was working but my fast ball was the main pitch.”

Cole told me that he will be playing baseball for the Nichols Bison next season.

Ryan McCarthy: “We were chasing runs from the get-go.  It’s the little things that we’ve got to be better at in the future.  We’ll be back tomorrow.”

The weather was very unpleasant.  Temps were in the 40’s.  There was drizzle in the early innings.  And then there was a very cold wind in the final innings. I spent a week in Turks and Caicos in March!

I was fortunate enough to pictures of Matt Solecki going skyward to avoid a possible tag by 3B Mark Glickman in the sixth inning. 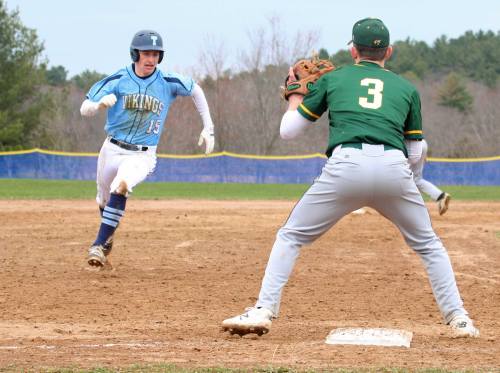 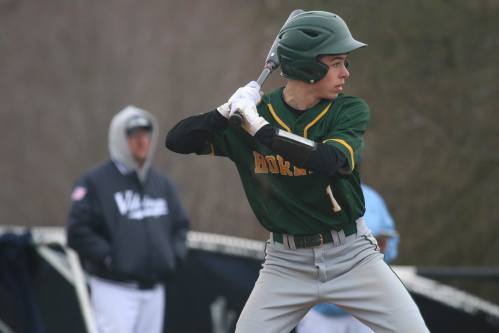 Jack Keller tags out Devin Parsons in the first inning

Cole Doke on second after driving in two teammates