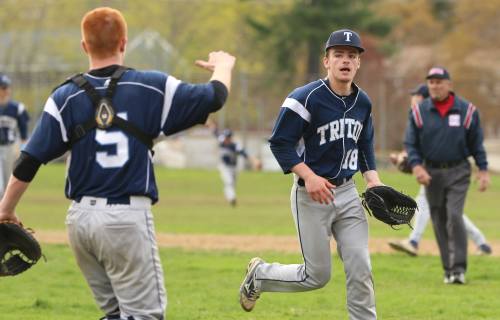 (Amesbury MA) Triton pushed their winning streak to five with a 6-4 win over Amesbury on Saturday afternoon in Cape Ann League baseball.

The Vikings (5-4) tallied four runs in the sixth inning to erase a 4-2 deficit.

Triton batted around in that decisive 6th inning.  Cael Kohan tied the game with a two-run single to left center.  Later in the inning, Kyle Odoy delivered the go-ahead runs with a double to left.

Blake Bennett drove in all four of the Indians’ runs.  Three crossed on his long home run to center in the third inning.  A two-out error by Drew Parsons extended that inning and gave Blake the chance to bat with two on.

Blake came up in Amesbury’s final inning with a runner (Logan Burrill) on base.  This time around Triton centerfielder Jack Tummino looked to be playing back somewhere in New Hampshire and was able to catch Blake’s long blast in his direction.

Cael Kohan started for Triton.  After Cael loaded the bases with one out in the fourth inning, Coach Ryan McCarthy brought in Jared Berardino.  In a turning-point moment, Jared got Tucker Molin to ground into a 1-2-3 inning-ending double play to keep Amesbury from enlarging a 3-2 advantage.

Amesbury (5-5) was at times its own worst enemy.  Starter Blake Bennett yielded six walks and four of them scored.  Triton’s first two runs scored on wild pitches.  Twice innings ended for the Indians on the bases.  In the third, Derek Doherty was picked off first by Cael Kohan.  In the fifth, catcher Tyler Godfrey threw out Blake trying to steal third.

The Vikings scored a run in the second.  Cam Gilroy walked, stole second, and reached third on a fielder’s choice.  A wild pitch brought him home and gave Triton a 1-0 lead.

Amesbury took a 3-1 advantage in the third with Blake Bennett’s homer.  At first it looked as if Blake would only get a ground-rule double but the umpires gathered with the coaches and it was ruled to be a home run.

Triton got a run back in the fourth.  The Vikings loaded the bases with two outs before a wild pitch scored Tyler Godfrey to make it 3-2.

In the fifth inning a Logan Burrill double into the left field trees was followed by a Blake Bennett single to left producing a run and a 4-2 lead.

Triton won the game in the sixth.  The Vikings were helped along by three walks and a wild pitch. Cam Gilroy, Tyler Godfrey, Jared Berardino, and Cael Kohan were the run scorers.

The Indians have played all their home games at Town Park because the high school field is water logged.  Amesbury is fortunate to have an alternate field.  I read today that some of the schools in Maine have only been able to play two games so far because of the weather.

What could go wrong in left field at Town Park?  In the picture you can see trees, branches, folks in lawn chairs, a car, and a dog all in the playing area.

Both coaches, before the game, considered me bad luck because I’ve only seen them lose this season.  I’m flattered to think that I have such an influence!

Near collision in the Amesbury outfield 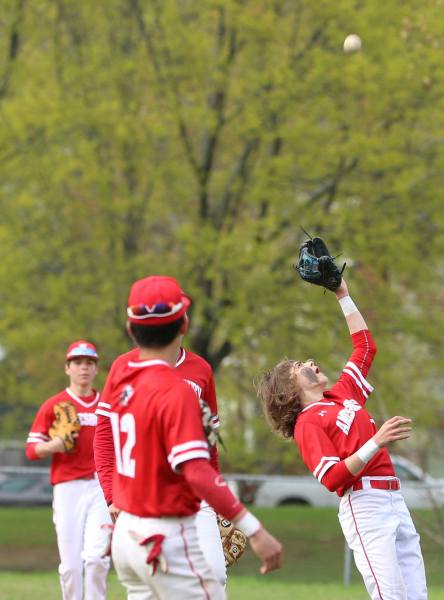 Shea Cucinotta under a popup 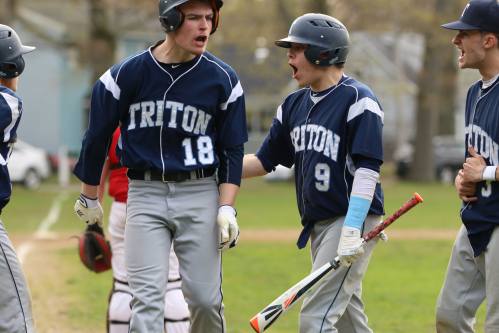 Jeremy Lopez reaches to pick up a grounder

Kyle Odoy drove in two runs in the sixth inning