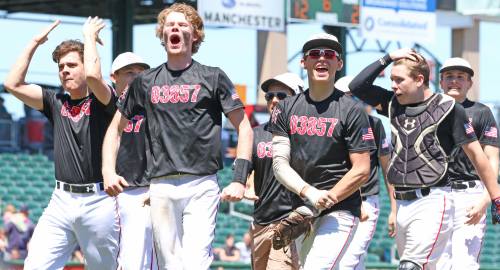 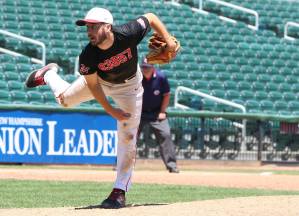 That streak of frustration ended for the Mules as they won the D4 baseball title, 12-2, over Pittsfield in a sun-filled Saturday game at Northeast Delta Dental Stadium.

“This was for our town,” said Lucas Russell afterwards, “and for all the alums who failed before.”

Lucas had four RBI in a 10-run third inning that took most of the suspense out of this game.

The ten-run rule went into effect after 4 ½ innings.

Pittsfield had five errors and all twelve Newmarket runs were unearned

“One bad inning,” said Pittfield coach Rob Stockman.  “We’ve had some trouble on defense and it reared its ugly head today.”

Did it ever!  The Panthers (19-2) had two errors in the third and three more in the fourth when the Mules (18-2) added two additional runs.

“We never expected to put up runs like that against a team like that,” said Newmarket coach Stan Jurkoic.  “Having those runs certainly helped to ease thing.”

Bad morning for Pittsfield to be giving up all those runs because Newmarket senior Josh Mastin was not nearly as generous.

Ben Stephens takes the last cut for the Panthers

Josh gave up single runs in the first and third but limited Pittsfield to three hits.

Josh’s best pitching may have been in the first inning.  After an out, there was a walk, single, and another walk.  A wild pitch gave Pittsfield the lead 1-0, but Josh retired the next two batter (popup & infield out) to limit the damage to one run.

The Mules threatened in the first (2nd and 3rd – no outs) but D4 Player-of-the-Year Devin Bedell got a strikeout and a ground out to keep Newmarket off the scoreboard.

So, early on this game has the feel of one that would be tight to the end.  Maybe a one-run, last-inning nail biter?

Pittsfield has defeated Newmarket twice during the season.  They had pitching and hitting.

But on this morning, they didn’t have solid defense, especially in the third inning. 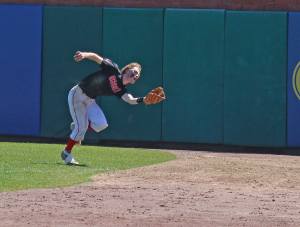 Fred Holmes makes a nice catch in the 2nd inning

“We have a young team and you need someone to step up and make a play to stop the bleeding,” said Coach Stockman.  “We just didn’t have that today.”

Thirteen Mules batted in the third inning.  Everyone in the batting order scored a run.  Josh Mastin crossed home twice.

Three runs into the inning, Coach Stockman switched Gavin Bedell in to replace his brother Devin.

Then the Mules’ bats went to work and lessened the guesswork on the final outcome.  Zach Hilton singled in a run.  Josh Mastin singled in two runs.  Lucas Russell then stroked an inside-the-park, three-run homer to stretch the Newmarket lead to 10-1.

“The bats were moving, and we were having a lot of fun out there,” recalled Fred Holmes of the inning.

“I squared it up,” said Lucas.  “It was a changeup and I kept my weight back and drove it up the middle.”

“Newmarket was just a better team today,” added Pittfield assistant coach Noah MacGlashing.  “One error turned into five.  We fell apart.  Take that inning away and it’s a much different game.”

Jesse MacGlashing drove in a run

But that inning didn’t go away, and the shaky defense was the key factor in two more Newmarket runs in the next inning.  Zach Hilton got his second RBI with a single and another run was added as the throw back in from the outfield rolled into the Pittsfield dugout.

The Panthers needed a run in the bottom of the fifth to keep the game going but after a walk, Josh Mastin got two infield groundouts before striking out Ben Stephens to end it.

“I wanted to strike out one last person to win it and that happened,” said Josh.

“It was just a great day for us,” said Coach Jurkoic.  “Josh put in another unbelievable performance.”

Newmarket last won a baseball title in 2001.  “Today was all for the fans,” said Josh.  “They have been waiting and it finally happened.” 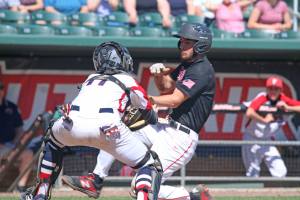 Fred Holmes: “This win totally makes up for our other losses.  It was a bummer losing in the soccer finals to Sunapee but this one is just fine with me.”

Josh Mastin: “I struggled a bit.  I’m tired out from pitching all the time.  My fastball was okay.  My curve and my off-speed pitches were working.  I thought the game would be close.”

Carter Bousquin: “That 10-run inning was insane.  It’s such a great feeling to win the championship.  Josh’s curve was on-point today.  Guys were absolutely buckled up by that curve ball.  He wanted that final strikeout badly.”

Lucas Russell: “This is what we all dreamed of when we were kids.”

Coach Rob Stockman: “You give a team like Newmarket five or six extra outs and you’re going to take a beating.”

Fred Holmes is planning to attend Utica College (NY) in the fall and study construction management. 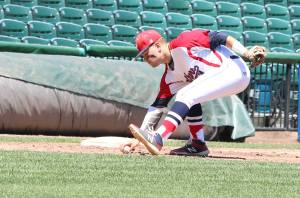 Kyle Stockman will be at Plymouth State.  “We liked what Coach Clay had to say,” explained Coach Stockman.  “It’s close to home.  He has some travel team friends who are going there.”

Beautiful weather for the game.