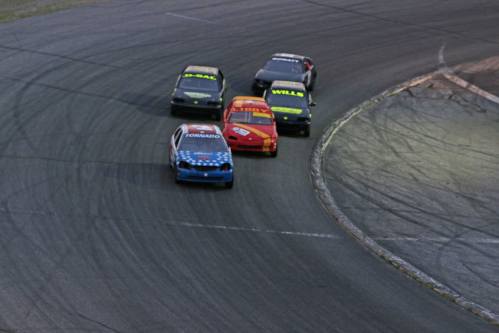 In the final yards, Travis Verrill (24) holds off Jeff Libby (44) with three other cars close by

Start of the Bandits feature

(Oxford ME) They came around the final turn with the chance of a lifetime.

One driver had never won a Saturday night feature.

The other had never finished above third.

Travis Verrill got his first win; a Saturday night feature in the Bandits division at Oxford Plains Speedway.

“It was my first Saturday night win,” said an exuberant Travis afterwards.  “We’ve got a couple of third places and fourth places on Saturdays.  We’ve won some flag poles but never on a Saturday night.”

For Travis to get that first Saturday night checkered flag was exciting but the race itself (20 laps) was one of the best I’ve seen at OPS. 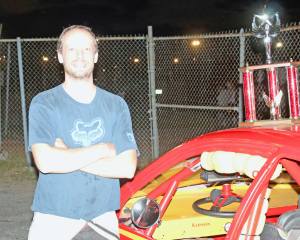 It was highly competitive from start to finish.  With no cautions sometimes the field spreads out and the outcome takes shape very early. This race wasn’t like that.  Travis and Jeff Libby started at the front and never seemed to separate by more than a car length.  Most of the time they were side by side.

Later in the race, three other drivers (Chad Wills, Dustin Salley, and Alex Mowatt) closed in on the top two.  Dustin has multiple wins while Alex had a win two weeks ago.  Any mistake up front and they were ready and in position to take the lead.

But it didn’t happen.  Both Travis and Jeff were that good on this evening.

I asked Jeff about the race: “It was exciting to get second since third was the best I had ever done before this.  The only chance I had to get past him (Travis Verrill) would have been to move him and I don’t race like that.  It still was our best race so far.”

This is how it looked into the 19th lap

“We don’t usually do a race like that,” said Travis, “and we took a lot of damage.  We had to replace everything in the left rear.  We even missed the first practice today but got it together before the heat.”

Travis won the first heat ahead of Alex Mowatt.

“I figured that all the work these guys put in this week to get me back on the track, there was no way we were going home without that trophy,” said Travis.

Little room for error in the last lap

The Paris resident added, “We won this in front of a good crowd.  I have a lot of fans who come out and support me.  My mom makes everyone come whether they want to or not!  But I appreciate everyone who comes.  It’s really the only reason it’s worth it.  You don’t make a million here.” 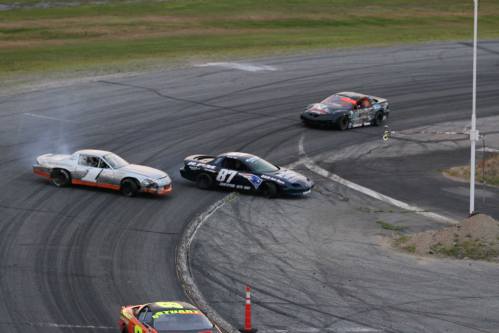 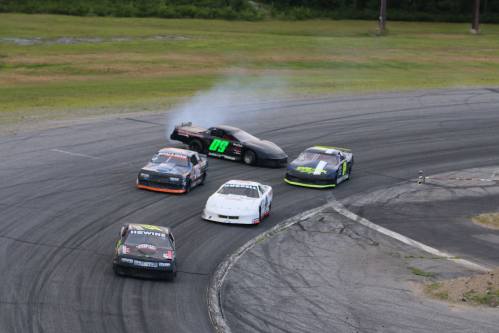 Mark Turner (09) spins out in the Street Stocks