(Oxford ME) The car wasn’t even his.

It belongs to Eric Parlin, and he wanted someone to “try it out and break it in.”

Jake Hall accepted the opportunity and drove Eric’s car to victory in the Bandits’ feature tonight at Oxford Plains Speedway.

This was Jake’s first race in the Bandits division this season.

“It was a perfect night, honestly,” said Jake afterwards.  “I got the win.  My kids got to see it.  And my teammate (Mikey McKinney) got to finish second.  You can’t beat that.”

Lineup for the start of the Bandits feature

Jake came in second in his heat to Dustin Salley but in the feature, it was a different story.  Starting in the pole position, Jake led from beginning to end in the 20-lap race.  “This thing is a rocket,” exclaimed Jake.

Mikey McKinney was quickly in second in the feature and the teammates (“I help Mikey with his car” – Jake) separated from the rest of the field.

No cautions cut the gap between cars and without cars to pass it was an easy win for Jake.

Jake and Mikey on the final turn

Jake was rookie-of-the-year in the Bandits division several years ago but has not raced much lately.  “I’ve got a car, but I haven’t broken it out,” he said.  “We bought a house and stuff, so finances weren’t there.”

This was only Mikey’s fourth race this season in the Bandits division and the best he had done previously was 14th.  “I haven’t raced much this year, but I’ve done well in the past,” Mikey told me afterwards. 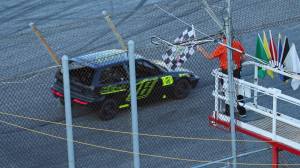 Mr. Consistent (Dustin Salley) won his heat and came in third in the feature.  “Consistent” describes Dustin because in thirteen races this season, he has never finished lower than fifth!  He has also won five times.

I am starting to become a fan of the Rookie Division.  There aren’t many cars but it’s highly competitive and there’s plenty of action.  Last week, Brady Childs tried to catch Owen Stuart at the very end and crashed just before the finish line.  Tonight, the same two were side by side and the next thing you knew Owen was spinning, and he and unfortunate Maddie Herrick collided.  Maddie’s night ended but Owen returned.  Brady won this race. 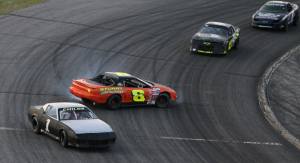 How can you not pull for Cole Binette in that Rookie division?  The young man is 10 years old!  Tonight he got third.

Jake Hall: “Eric (Parlin) has only raced a couple of races but this car is a good one for him to start with.  I’m going to run again on the 250 weekend with the Rebels.  Then I’ll be down here helping Eric make sure that this car does for him what it did for me tonight.” 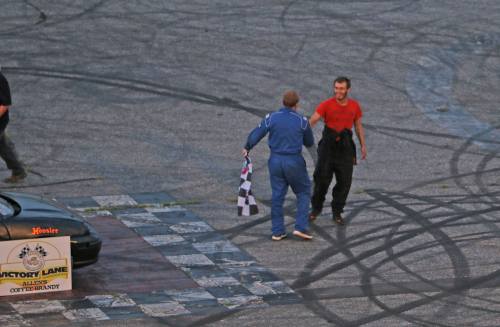 Jake Hall gets out of the car