Alyssa Pettet kicked home the game-winner in the shootout

(Lynn MA) I struggled all afternoon trying to guess how this game was going to go.

I tried the Manchester-Essex end at the start because Amesbury had beaten them twice during the season.

That put me out of close range as the Hornets dominated the first half and had a goal (Mia Cromwell at 17:16)) to show for it.

Second half I favored the Amesbury end because that was where ME had spend a lot of time in the first half.

That put me long range as Amesbury scored (McKenna Hallinan at 35:43) and carried the play in at least half of the second half.

In the final twenty minutes, both teams had chances but the goalies (ME’s Kara Glynos & Amesbury’s Alli Napoli) made plays.

In the final five minutes of regulation, the Indians were called for an infraction in the box.  Suddenly there would be a penalty kick (far from where I was standing!).

Mia Cromwell tried to go to the left corner with her PK but GK Alli Napoli lunged that way and the game continued.

Now we had overtime. 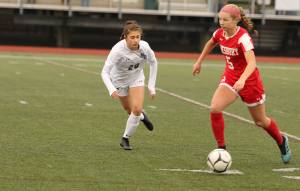 Both teams had chances to end it in the overtimes.  Amesbury’s Alyssa Pettet came very close in the first OT but the game continued as no one was found who could finish for either team.

That opened the door for the dreaded shootout.  The pressure, the lonely walk to the penalty line, and the elation/agony with the result.

The two goal scorers (Mia Cromwell & McKenna Hallinan) shot first.  Mia froze GK Alli Napoli with a shot to the right.  (In the PK at the end of regulation she had gone to the left and Alli was there.) McKenna’s shot against Leilani Brown was high to the left.

So after two rounds the score was tied.  Who expected this after these teams were tied after eighty minutes of regulation and twenty minutes of overtime??

Maya Baker and Avery Hallinan were in the third round.  Maya shot up the middle and Alli Napoli hardly moved to save it.  Avery shot to the right and it slipped by ME GK Leilani Brown.  Advantage Amesbury.

The last round this game would need to reach an outcome had Sofia Gillespie and Alyssa Pettet in it.  Sofia’s shot went over the top and that gave the CAL Player-of-the-Year a chance at the game-winner.  She shot hard to the upper left by GK Kara Glynos and Amesbury had a 2-1 win in PKs.

With the victory the Indians (14-1-6) capture the Division 4 North title again and will face Millis (again) on Wednesday night (5PM) at Manning Field.

The Hornets’ goal in the first half was nicely set up.  “Maya (Baker) and Mia (Cromwell) worked a nice give-and-go on that one,” explained ME coach Luke Cosgrove afterwards.  Mia ended up with a good look and drove her shot to the right side.

Junior Dasa Hase started the play by getting the ball from the left wing into the middle to Maya. Dasa’s corner kicks were threatening all game long.

The Indians’ goal in the second half resulted from a halftime adjustment in their corner kick formation.  Alyssa Pettet normally draws two and three defenders and usually heads close to the goal when a corner kick heads that way.

“Avery (Hallinan) suggested that having Alyssa go away from the goal would open up the front of the goal,” said Coach Adam Thibodeau.

“I ran Alyssa’s route,” explained Avery, “and no one was on me as the corner kick (MK McElaney) came in.  I tipped it and then McKenna (Hallinan) put it in.”

Avery “insisted” that the shot would have gone in without her sister McKenna’s “help.”  My pictures tell me, however, that McKenna’s part was essential.  She dove feet first into a ball that was just about to be cleared out and sent it into the left corner of the net.

McKenna sees the ball near the goal line

One thing that was certainly agreed on was the extraordinary game Alli Napoli had.  “Alli is an outstanding athlete, “said Coach Thibodeau.  “She took the team on her back today.  She was disappointed with the first goal.  She has forty-nine career shutouts for a reason.”

Waiting for the shootout

Amesbury doesn’t give up many goals (16) but they also don’t score very many (35).  “We’ve had six ties this year, so we have been preparing our penalty kicks for a while,” explained Coach Thibodeau.

Senior Gracie Doherty spent most of the afternoon chasing talented Dasa Hase around.  “She’s good with the ball and very fast,” said Gracie.

On her successful penalty kick: “I wanted to take my time and try to get it into a corner.”

Avery Hallinan didn’t practice yesterday.  “My ankle is killing me,” she said post-game.

On her successful PK: “I walked up and my stomach dropped.  I shot it and thought, ‘Okay, it went in!”

Alyssa Pettet’s game-winning penalty kick was her 4th of the season.  “PK’s are very tough mentally,” the Holy Cross commit said afterwards.  “You have to tune out everything that is happening.”

On Alli Napoli: “I was confident with her in net in the shootout.  She’s so athletic that she would probably be good in any sport she tried.”

Alli may have seemed calm on the field but she wasn’t.  “I was nervous out there all the time,” she said.

McKenna Hallinan on the goal she scored: “Avery’s shot was NOT going in.  It was a twin-to-twin effort.  We have twin telepathy.  We love our twin-twin moments.”

The Hornets (11-4-5) alternated goalies.  Junior Leilani Brown was in net for the first half and the first overtime as well as for the first and third PK.  Senior Kara Glynos guarded the goal in the second half, second overtime, and the second and fourth PK.

Overcast conditions with light rain after the game was over.

Tough day for Manchester-Essex.  Their boys’ soccer team lost to Burke in the game before the Amesbury girls soccer game.

(Many of the pictures are long range.  Essential that you click on them to see them enlarged.  Some, also, are a bit blurry because of the distance away that they were taken from.)

Alli Napoli above the crowd 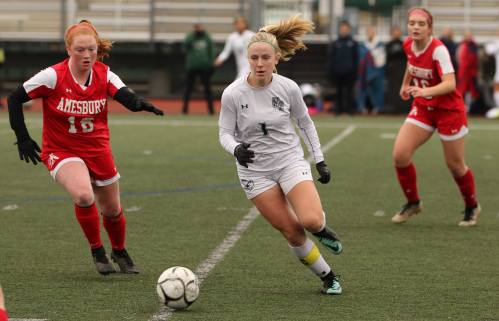 Coach Luke Cosgrove with ME captains and trophy 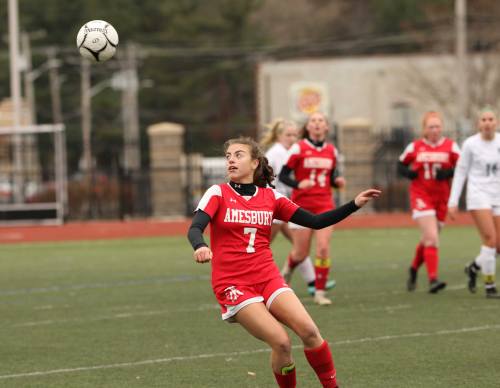