TJ Overbaugh (11 points) in the air in the lane 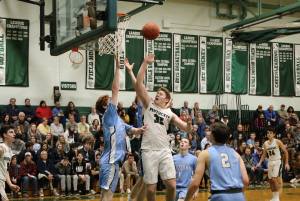 Battle under the basket

Both teams were on losing streaks.

Triton fared best in this crucial outing for both squads and defeated Pentucket, 62-52, on Friday night.

The noise during the game was at tournament level.

It was Senior Night.  Kids played at halftime and there was a heavily-involved band.  To say the least, there was a lot going on. 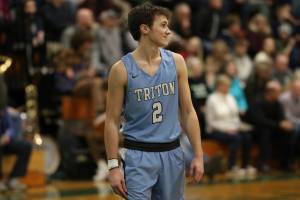 Sparked by thirteen of Mason’s points, Triton was ahead, 28-12, halfway through the second quarter.

“We were missing several key players,” said Mason, “and coach said that I had to pick up some of the slack on offense and that is what I did.”

Pentucket coach Ed Hickey cited the bad start as crucial: “We dug ourselves too deep a hole early in the game.”

The Sachems (5-9) were still in double-digit trouble early in the final quarter trailing, 43-30.

Thereafter, the struggling Pentucket offense, which had put up seven points, thirteen points, and ten points in the previous three periods, came to life.

Silas Bucco (13 points) and Sam Stys (11 points) led the charge for the Sachems.

A rebound basket (Sam) and a layup and a three (Silas) and suddenly the home team was within reach of the Vikings, 43-37, with six minutes left.

With all the noise and excitement in the building you suspected that the Vikings might fold into a tight finish.  Your suspicions would have been wrong on this evening.

Mason Ferrick and fellow senior TJ Overbaugh (11 points) led the Triton resistance each of the final four times.  TJ made free throws while Mason converted a rebound, hit a jump shot, and assisted on a last-minute layin by junior Brendan Dennis.

“It was a great team effort,” said Coach Ted Schruender post-game.  “We had guys step up with key guys injured.  We had big games from TJ and Mason.”

“We tried making a push at the end,” said Sachems coach Ed Hickey.  “Whenever it seemed like the momentum was swinging our way, we’d miss a shot or foul or have a turnover.  The kids played hard.  We just didn’t get it done tonight.”

TJ Overbaugh: “We played well.  We came out and did what we had to do.”

The Pentucket losing streak now reaches eight after a very promising start to this season.  The Sachems were 19-3 last season.

“We’ve got five more games left,” said Mason Ferrick.  “Two wins will get us into the tournament.  If we win more than that we might get a higher seed in the tournament.”

The Pentucket band impressed me.  The kids could play, and they were astute and organized enough to play only when the teams on the floor weren’t playing.

Silas Bucco  in the lane 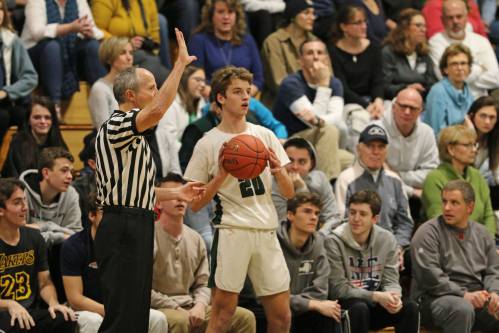 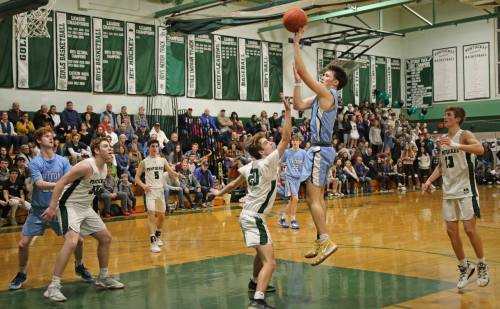 Mason Ferrick (18 points) in the lane

Dylan Wilkinson (12 points) looks for someone to pass to

Brendan Dennis at the line