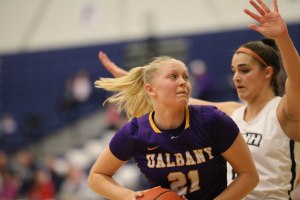 (Durham NH) Albany went turnover, turnover, and missed three in the closing minute and it cost them.

Albany coach Colleen Mullen’s team has now lost three in a row, but her eyes are on the big picture: “Although we didn’t win, we were better than the last two game. No one is getting an at-large this year so the (American East Conference) playoffs ahead are crucial.”

New Hampshire has Maine (home) and Binghamton (away) on the rest of their schedule.

Helena Delaruelle had a big steal in the last minute

“It’s cooking now with three wins in a row, but we know that we have tough games ahead,” said Coach Magarity. “If we can finish in the top four, we will host a playoff game.”

“We focused on finishing (at halftime),” said Coach Magarity. “I told them that they work so hard and execute so well that they deserve to finish.”

The Great Danes (9-18) were without junior point guard Kyara Frames. Kyara was a preseason All-Conference selection this year as well as a third team American East All-Star last season.

Albany struggled with turnovers (22 in the game) all afternoon.

“Without (Kyara) Frames it was tough on them,” said Coach Magarity. Kyara played forty minutes on Wednesday versus Binghamton but was not in uniform today.

“We knew that they didn’t have many ball-handlers so getting up into them was a huge key to our game,” explained senior Caroline Soucy. Caroline had three of UNH’s nine steals.

“Twenty-two turnovers to their six is never a good stat,” said Coach Mullen. “The two down the stretch really hurt us.”

Albany was in front, 48-41, with six minutes left. Caroline Soucy started UNH on the way back with a steal/layup and a backdoor/layup (pass from Ashley Storey). Helena Delaruelle assisted on Maggie Ahearn’s layup and suddenly the Wildcats were within one (48-47).

The Wildcats took the lead (52-51) after an Amanda Torres steal/layin.

Two free throws later (Helene Haegerstrand), Albany was ahead, but not for long. Helena Delaruelle got to the hoop and now New Hampshire was on top with 1:21 left.

The rest of the way the Great Danes had three unproductive possessions.

“We had a freshman guard (Izzy Om) in there playing thirty-six minutes,” said Coach Mullen. “They have athletic guards that put pressure on the ball.”

One of those athletic guards (Helena Delaurelle) created the second turnover of the final minute and UNH had possession, and a one-point lead, with thirty-three seconds left.

Albany was going to get the ball back with several seconds left even if New Hampshire used the entire thirty seconds.

“With two seconds left there were a lot of things we could do,” explained Coach Mullen. The Great Danes opted to defend for the thirty seconds instead of fouling.

“It was a coaching strategy,” said Coach Mullen. “I was trusting my defense to get a stop and not foul doing it.”

“You never know it that situation,” added Coach Magarity. “You can foul and put the other team on the line and know you’re going to get it back or just play really good defense.”

“We moved the ball,” said Coach Magarity. “We waited because if you go too early you give them the ball back with more time left.”

With the shot clock running down, Amanda Torres got past Khepera Stokes and drew a foul from Helene Haegerstrand.

Amanda cashed both free throws with two seconds left to give UNH its biggest lead (three points) of the game, 56-53.

After a timeout, Albany got off a tying attempt (Amanda Kantzy) but it went wide.

“You can’t say enough about Amanda Torres’ toughness,” added Coach Mullen. “She was able to draw the foul at the end of the game. I wish that one of us had stood up and taken a charge on that drive, though.”

The Wildcats had won the first meeting (48-47) in January on a last-second, inbounds, lob pass to Ashley Storey by Helena Delaurelle.

UNH struggled big-time to score points in the first half. “The first half was not pretty to say the least,” said Coach Magarity.

The Great Danes, despite thirteen first-half miscues, were in front 22-15 at the half. Freshman Helene Haegerstrand contributed eleven points.

“I thought that our zone affected them in the first half,” explained Coach Mullen. “We wanted to slow them down.”

“Their pressure made us feel uncomfortable even from the start of the game,” said Coach Mullen.

Coach Magarity: “We were much more patient in the second half. We had great production from Ivy (Gogolin) and Brooke Kane. Maggie Ahearn was a difference maker in the second half with her aggressiveness, timing, rebounding, and defense.” 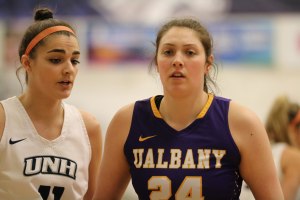 Senior Ashley Storey: “It was fun today, but we have more things to do.”

Albany is now 5-9 in the America East.

Thanks to the UNH media staff, especially Doug, for taking care of me.

Ashley Storey (11 points) in for two 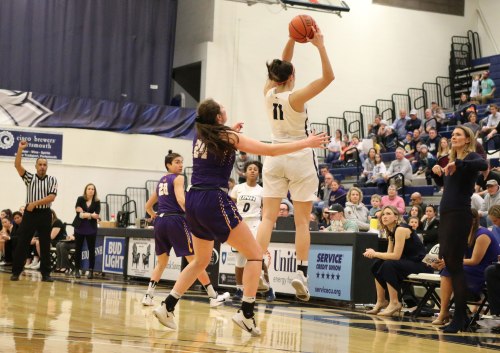 Ashley Storey up for an inbounds pass 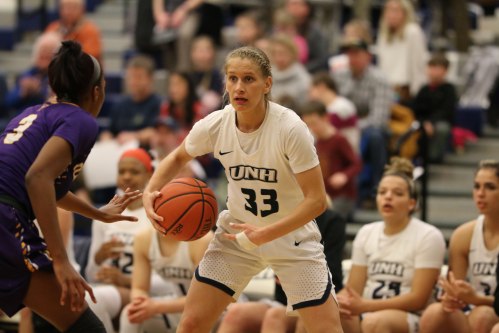 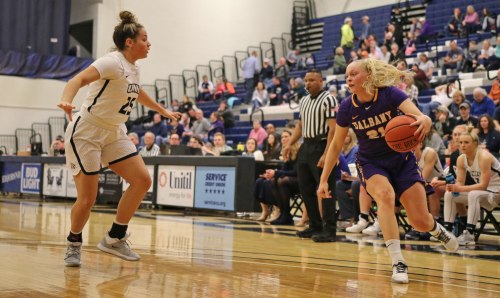