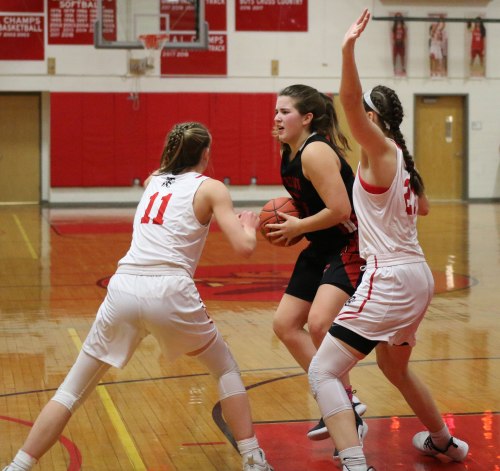 (Amesbury MA) The Amesbury offense was rusty, but their defense certainly wasn’t.

The Indians (#2 seed) rode their full-court, pressuring, trapping defense to a 49-31 win over Watertown (#10 seed) in the Division 3 North quarterfinals on Friday night.

“The defense saved us tonight,” said AHS coach Gregg Dollas afterwards. “We hadn’t played in ten days and it showed on offense.”

The Indians (19-2) broke away from a 10-10 tie early in the second period on an Alli Napoli full-court drive and built their lead the rest of the way.

“We started off really slow but after a while we settled down and made our shots,” said sophomore Avery Hallinan (16 points).

“Their pressure kept us out of rhythm,” said Watertown coach Pat Ferdinand.

“We focused on our defense and trapping in our recent practices,” explained McKenna Hallinan. “It really helped us today. We needed to switch on pick-and-rolls because #53 (Taylor Lambo) was involved and we wanted to deny her the ball.”

Taylor ended up with thirteen points.

Amesbury registered seven straight points after tying the score at 10-10.

Alli Napoli (14 points) on her way to the basket

Alli Napoli (14 points) collected three layups in this surge. One was a full-court drive through the entire Raiders defense.

“She (Alli) was dynamic,” said Coach Ferdinand. “Regardless of what we did she was able to control the flow of the game.”

Amesbury’s next game will be at a neutral site, so this not only was another of the 1000-point scorer’s “good” games but her last at AHS.

The Indians ended the first half with two Gabby Redford (13 points) free throws that started Amesbury into ten unanswered points.

The Raiders (10-12) had gotten within seven (22-15) on a Brittany Catsoulis jump shot before Gabby’s free throws.

While the Raiders were shut out for nearly six minutes of the third period, the Indians scored eight in a row.

Avery Hallinan had a layup and an old-fashioned 3-point play while Gabby Redford cashed the new-fashioned version of a three-pointer.

“I thought Gabby hit some big shots for us tonight,” said Coach Dollas. “She was a 2nd team Cape Ann League All-Star for good reason.”

The Amesbury lead had been built to 32-15 with three minutes left in the third quarter.

The teams played even (point-wise) the rest of the way.

Watertown’s Ellie Monahan had eight points in the second half including a buzzer-beating triple to close the third quarter.

The Raiders needed stops to go with their improved offense in the final period but on this night couldn’t find it.

“At times we got stops but we couldn’t get baskets on the other end,” said Coach Ferdinand. 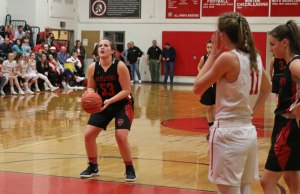 Taylor Lambo (13 points) at the line

Watertown is from the Middlesex League. In their first-round game they defeated Latin Academy, 46-36. Taylor Lambo had twenty-two points, fifteen rebounds, and three blocks in that one.

Amesbury is in the Cape Ann League. Their two losses this season have been to the D2 North #1 seed (Pentucket) and the D3 #1 seed (St. Mary’s).

Coach Dollas: “Our defense was really good. We didn’t want them to be able to set up their offense. That was our goal. We had good energy the whole time.”

Gabby Redford: “At first it was very stressful because we were down at the beginning. It was good for us to step up in the second half. The fan section really helped.”

Mary Bullis: “I thought the girls stepped up on defense. Because of the pressure, #53 had to bring the ball up. I’m not sure she wanted to do that. I know that feeling.”

Coach Ferdinand: “I’m proud of our girls. We didn’t have enough tonight. Sometimes you see that a team has an edge on you. You just try to compete as much as possible and we did.” 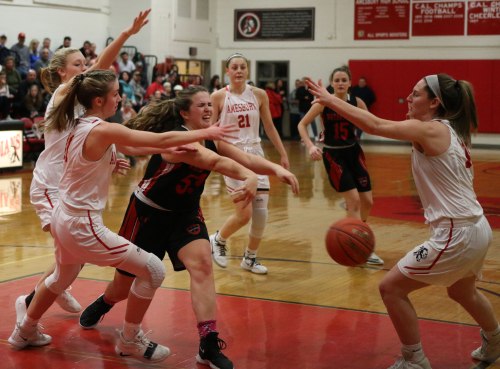 Taylor Lambo looks for an opening 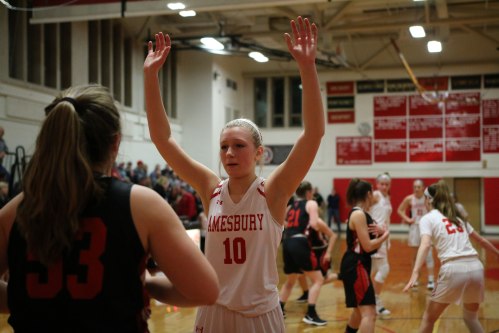 Leah D’Amico looks for an opening against Ashlee Porcaro 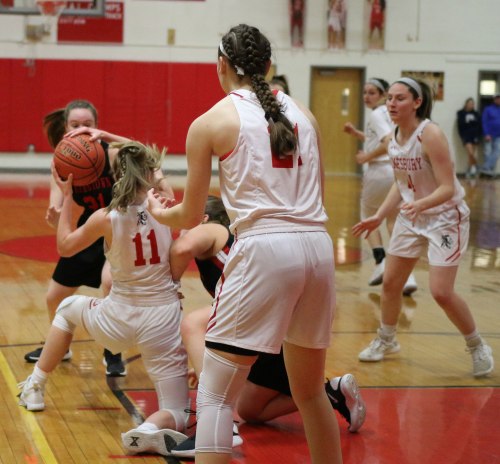 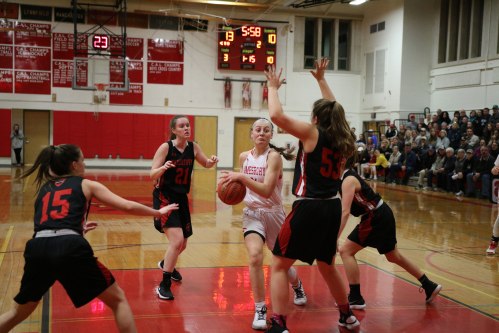 Alli Napoli in among four Raiders 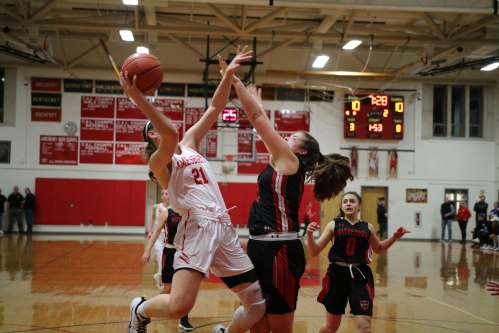