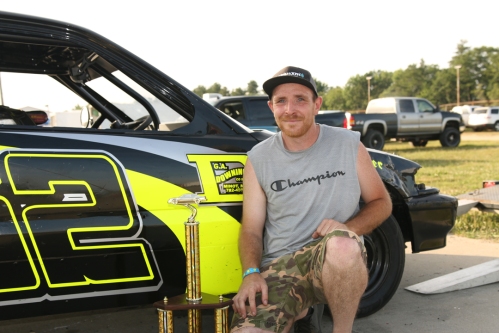 (Oxford ME) Chad Wills has won before but sometimes it’s more than the best car that earns you the checkered flag.

“We were fast for sure, but our win tonight had to do with being in the right place at the right time,” explained Chad after winning the Bandits feature at Oxford Plains Speedway on Saturday night.

That “right place/right time” occurred for Chad in the second lap of the twenty-lap event.  He started in the 4th row but a spinout (Eric Parlin) in the 2nd lap quickly rearranged things in the front to his benefit.

“The guys up front at the start are still learning and so we got off to a bit of a slow start,” recalled Chad.  “When things happened, I picked the right lane to get through it.”

Eric Parlin in a spin

Despite several cars thrown off course, there was no caution.  “It stayed green,” added Chad, “and that definitely helped.”

Alex Mowatt, who would end up second, was near the back when the spinout happened.  “I thought there was going to be a caution when Eric Parlin got spun.  I slowed down but they didn’t throw the caution.”

Nick Ogden came out of the spinout ahead with Chad Wills nearby, but not for long.  Chad was by him on Lap 4.

Chad Wills moves to get inside Nick Ogden

“I figured that Nick would do all he could to protect the bottom, but he gave me plenty of room, surprisingly,” said Chad about getting past Nick and into the lead.

“I certainly appreciated the opening,” added Chad.  “Nick is a good driver.  He won the championship at Riverside.”

Last year’s points champion in the Bandits Division cruised over the final sixteen laps to get his first win of the season.

Alex Mowatt rallied back to get second place

This year’s points leader (Alex Mowatt) finished strong getting past Jeff Libby for 3rd place in Lap 15 and Nick Ogden for 2nd place in the last lap.

“I think I would have had a shot at (Chad) Wills if my front tire held up,” said Alex.  “It was pretty chunked off.”

Alex has had a first, second, and three thirds so far.  “I won the first race and I’m ready for another,” he said.

Chad said that he was aware of Alex’s late run: “I kept watching the board.  I didn’t want to burn up everything I had if I didn’t need to.  But then I saw with about two laps left that Alex was making his way around Nick Ogden, so I had to step on it.  I wanted to stay away from those lap cars because you never know what they’re going to do.” 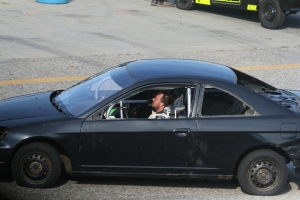 Newcomer Josh Toothaker took the only Bandits heat.  “Josh used to race Outlaws,” explained Chad.  “He can weld and fabricate, and he stumbled upon a good deal for a car.  He hit the right lane in that heat that he won today just like I did in the feature.”

Alex Mowatt: “Most of the drivers get along pretty well.  At the same time, we’re not out here to make friends.”

Another week (it’s been five) without spectators.  The Oxford 250 is less than a month away.  Will that race be run without a crowd? 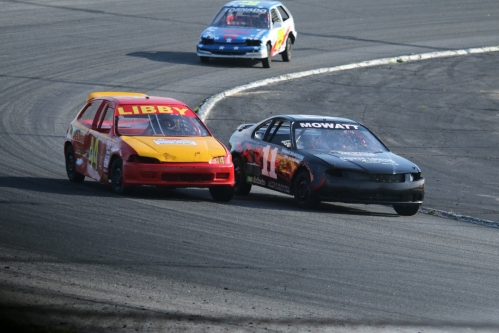 Alex Mowatt gets by Jeff Libby

Nick Ogden with the lead after the spinout 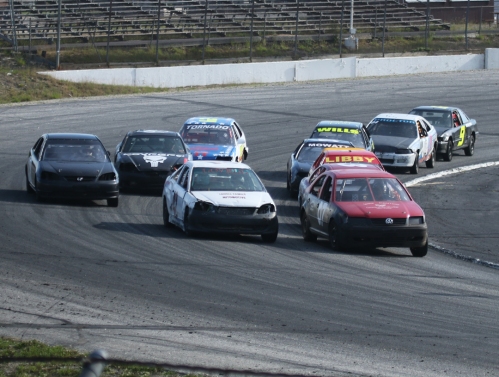