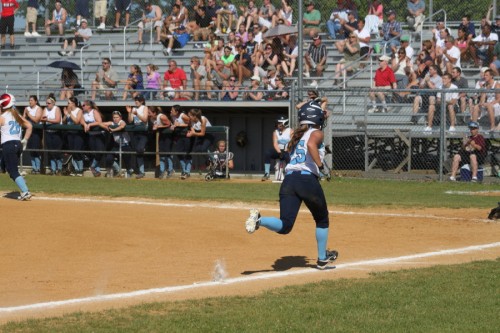 (Lowell)  Dracut (22-1) rolled along into the D2 North finals (Monday 3:30PM) with a 6-1 victory over Danvers on a warm Sunday afternoon at Martin Field.

Dracut will face Winchester for the D2 North title on Monday afternoon at Martin Field.

Danvers (19-4) hung with the Middies into the fifth inning, trailing only 2-1, but then Falcon miscues in the field gifted Dracut with four back-breaking runs.

Dracut ace Lauren Ramirez tossed a 3-hitter with eight strikeouts.  The talented junior had five of those K’s in the last two innings.

The Middies collected nine hits off Kendall Meehan bunching four each in the productive first and fifth.

Amanda Vallante led off the first inning with a single, was sacrificed (Samantha Durand) to second, and driven home by Lauren Ramirez.  Lauren’s courtesy runner (Kaylee DiCamillo) was delivered by Kaleigh Bishop-Kotarba’s single to center.

Down 2-0 after one inning, Danvers picked up a run in the second.  Two bobbles by the left side of the Middies infield enabled Caitlin McBride (who had lead off with a walk) to cross with the Falcon run.  Danvers left the bases loaded in that second inning.

Dracut put the game out of reach in the fifth.  A dropped throw (first baseman Devyn Downs) put runners on first and third.  Samantha Durand sliced a single to right scoring Ryan Madison.

If Danvers could have stopped the bleeding immediately with a two-run deficit they might have had a chance to make things interesting in the last two innings….but they didn’t.

Catcher Genevieve Benoit and pitcher Kendall Meehan collided fielding a bunt attempt and the Middies had the bases loaded with two outs.  Left fielder Nicole Smith took a chance on making a catch on Kaleigh Bishop-Kotarba’s line drive her way.  However, the ball bounced in front of Nicole and then by her.  All three Dracut base runners scored giving the Middies a 6-1 lead.

Lauren Ramirez made that five-run advantage stand up and Dracut moved on to the finals against Winchester on Monday afternoon.

Kaleigh Bishop-Kotarba had two hits for Dracut.  Julia Saggese did the same for Danvers.

Freshman Brittany Dougal made several nice plays for the Falcons at shortstop.

Lauren Ramirez’s father Ray called the pitches for his daughter.

When Chrissy Gikas batted the centerfielder Amanda Vallante was standing behind second.

Middies??  Dracut was where the first US Navy uniforms were created.

(All the pictures above and below enlarge considerably if you click on them.)